Tony Gonzalez Goes Out With a Fizzle

A future NFL Hall of Famer will never reach the Super Bowl. 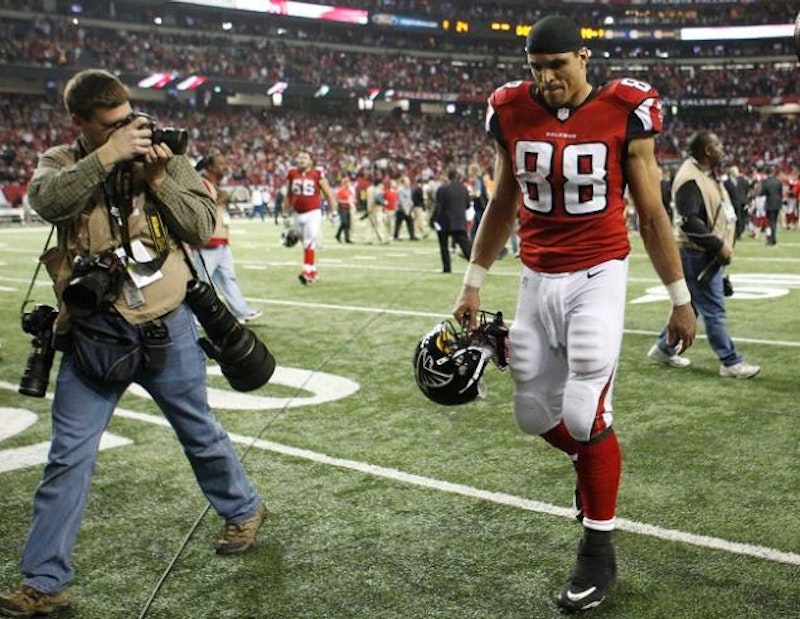 The Atlanta Falcons are perhaps the NFL’s biggest disappointment this season. A team that was in the NFC Championship game last winter now sits at 2-5 with a terrible defense and a decimated receiving core. The only thing standing between Atlanta and the NFC South basement is the dumpster fire Greg Schiano refers to as the Tampa Bay Buccaneers. The Falcons lured future Hall of Fame tight end Tony Gonzalez back from the brink of retirement following the championship game loss to San Francisco for one more postseason run. The Falcons’ dismal start has all but dashed those dreams and Atlanta’s decision to keep Gonzalez rather than trade him before Tuesday’s deadline virtually sealed the fate of the all-time great. Gonzalez, perhaps the best pass-catching tight end in football history, will retire never having appeared in a Super Bowl.

Gonzalez wasn’t publicly lobbying for a trade but he must be disappointed. The Falcons have already lost WR Julio Jones for the season, WR Roddy White has been hampered by ankle and hamstring injuries, and free-agent signee Steven Jackson has been about as productive and injury-prone as we’ve come to expect from running backs on the wrong side of 30. Atlanta’s on the road to nowhere, but the front office was unsettled by the prospect of dealing Gonzalez (one of QB Matt Ryan’s few remaining weapons) and essentially throwing in the towel on the 2013 season. Atlanta is only seven games into the season and there’re a lot of beer, hot dogs, hats and jerseys left for peddling.

The 37-year-old Gonzalez is having another very solid season. He’s been the model of consistency since his entrance into the league having caught 70 or more passes in 13 of his 16 full seasons. Gonzalez is on pace to top 70 catches once again in what he’s publicly stated will be his final season. The Kanas City Chiefs, Gonzalez’s former employer and surprise team of the NFL season, appeared to be a likely suitor for the tight end’s services. The Chiefs lack dynamic offensive weapons in the passing game and the thought seemed to be that the franchise would love to bring back a former star for one more shot at a Super Bowl run. The truth is the 8-0 Chiefs, led by Andy Reid, have little to no attachment to Gonzalez. The front office and coaching staff have been turned over several times since Gonzalez last played in Kansas City and Reid’s Chiefs appear to prefer looking forward rather than opting to bring back a fading legend.

The Baltimore Ravens and New England Patriots, presumed Super Bowl contenders who have struggled at the tight end position, likely had little interest in Gonzalez. The Ravens have slumped to 3-4 on the season and have muddled through with the Dallas Clark/Ed Dickson duo at tight end. Dennis Pitta, recovering from a fractured hip, is reportedly ahead of schedule and could return to the field in late November. The Patriots’ offense has sputtered this season with TE Rob Gronkowski on the sidelines and his running mate Aaron Hernandez awaiting a murder trial. Gronk returned to the field two weeks ago but the New England passing game has yet to take flight. Gonzalez could have helped New England in two tight end sets but the Patriots have been hit hard by injuries, relegating the lack of tight end depth to a minor issue when compared to the offensive and defensive lines.

In the end there probably wasn’t much of a market for Gonzalez. That’s unfortunate but understandable. The value of draft picks, even late round picks, has skyrocketed over the past decade. As the NFL’s new rules on dealing with concussions evolve and the penalties associated with helmet-to-helmet hits continue to result in serious knee injuries, the value of depth will become even more paramount. Well-run teams now value depth over star power, which ultimately sealed the fate of Tony Gonzalez.