A smart general manager would trade for the disgraced Brewers slugger. 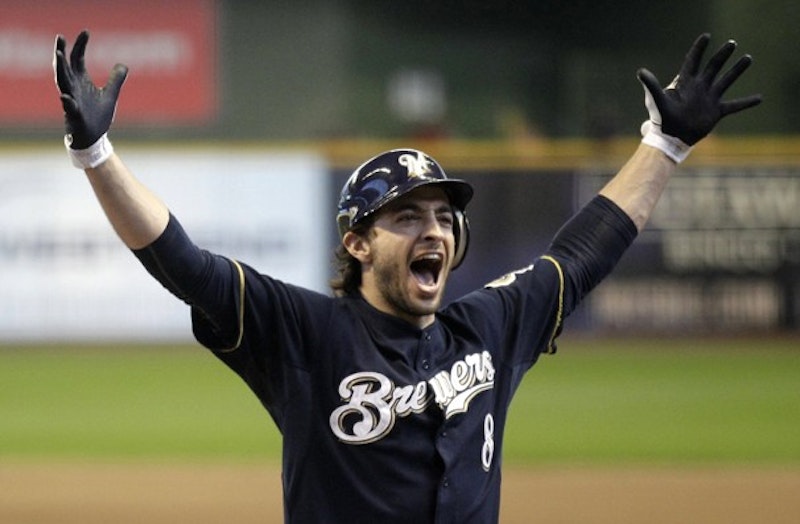 Not long ago, Ryan Braun was one of baseball’s most marketable players. What’s more valuable to MLB than a young, affable superstar who’s stuck with one team for his entire career? Additionally, the Milwaukee Brewer is fairly enterprising, opening restaurants and accepting many endorsement deals. When Braun’s first PED scandal broke, directly after receiving the 2011 National League MVP award, sportswriters and fans were more than willing to give him the benefit of the doubt until his hearing. When he eventually won that hearing (on a technicality, no less), all faith in Braun was (idiotically) restored, and people were ticked off at MLB for having the gall to even accuse the superstar in the first place. In their eyes, Braun could do no wrong. His talent was a mixture of innate ability and hard work!

Naturally, those same fans and pundits that backed the left fielder in 2011 were the first to vilify him once the Biogenesis scandal broke. Braun’s endorsement deals have vanished and he’s been ousted from his Milwaukee bar and grill, 8-Twelve. As a marketable asset, Braun’s stock couldn’t have plummeted any lower. But can he still hit?

Since Braun was initially caught directly after the 2011 season, we can assume that he was either not using PED’s in 2012 (arguably his best season) or using them without detection, which would seem risky considering the media spotlight that surrounded him. Then again, he clearly has a lot of guts. How many baseball players are smart enough to lawyer up and beat a PED charge on a technicality? The point is: I have no doubt that Braun will continue to be a highly productive player for the foreseeable future. 2013, however, was a year of career lows. He hit the DL for the first time and was then suspended for 65 games. His .298/.372/.498 slash line wasn’t terrible, but it was far below expectations. This can likely be chalked up to nagging injuries, a lack of playing time, and the Biogenesis scandal breathing down his neck. In 2014 he’ll go back to being a stud.

But right now, Braun’s media poison, especially in Milwaukee. A year ago today, Brewers GM Doug Melvin never would’ve considered trading his superstar. Now, however, Braun may very well be available to a team willing to part with a decent package of prospects.

This probably wouldn’t be the case if the Brewers were any good. If Melvin were looking for a title next year, there’s no way he’d deal one of the best hitters in baseball. They’re far away from contention, however, and the franchise’s farm system isn’t looking too hot. In fact, it’s pretty lousy. Prior to 2013, ESPN’s Keith Law ranked it as the second worst farm system in MLB.

The only problem with acquiring Braun is the fact that he comes attached with all that baggage. It’d be funny to see how a public relations department would handle that acquisition. I can already see the nauseating headline “We Believe in Second Chances” all over the Internet. Who would be scrutinized more, the team who trades for Braun, or the Brewers, once Braun puts together another MVP caliber season?

Anyhow, the point is moot. This whole idea is just an interesting thought exercise. There is no GM in baseball (save Billy Beane, who is handicapped by a small payroll) who has enough guts to go through with such a controversial trade.

Actually, now that I think about it, Blue Jays GM Alex Anthopoulos is always up to something fishy. This is right up his alley.