Is Brian Matusz the odd man out? 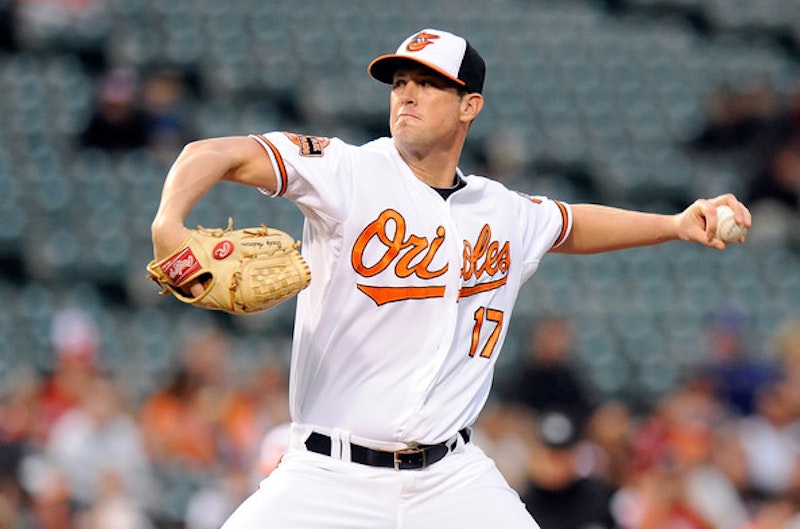 Buck Showalter and Dan Duquette have done an excellent job giving themselves plenty of options and depth over the past three seasons. The team’s ability to manipulate the roster has played an integral role in the Orioles’ resurgence. The 2015 season figures to offer much the same as Duquette and Showalter will have some tough decisions to make on the construction of the team’s bullpen over the next week.

The signing of Wesley Wright and Spring Training performance of Rule 5 draftee Jason Garcia has muddied the waters for Brian Matusz. After bombing as a starter, Matusz has emerged as a solid reliever over the past three seasons. The problem is that Matusz is out of minor league options, meaning he has to stay on the Orioles’ roster all season or made available to any other team. The same goes for the fire-balling Garcia who was selected from the Red Sox organization in December’s Rule 5 draft. The Orioles would no doubt like to stash the 22-year-old Garcia at the back of the bullpen, but roster flexibility remains key for the O’s.

The Orioles also may have to choose between right-handers Brad Brach and Ryan Webb. Brach emerged as a valuable member of the 2014 bullpen after coming from San Diego via trade. Webb struggled through some injury and inconsistency last season and is guaranteed $2.75 million for 2015. If Garcia is on the Opening Day roster, Brach or Webb may be packing their bags.

The Orioles should also be considering lefty T.J. MacFarland for a bullpen role. MacFarland was a Rule 5 pick in 2013 and become a key contributor for the Orioles last season. The 25-year-old southpaw appeared in 37 games for the Birds and made five starts for Norfolk in 2014. The best thing about MacFarland is that he has minor league options remaining, so the O’s can ship him back and forth from the big leagues to minor leagues several times throughout the season. Need a spot starter or extra catcher for a few days—option MacFarland to Norfolk and tell him not to unpack. MacFarland and infielder Ryan Flaherty may be on that Southwest Airlines Baltimore to Norfolk shuttle several times this season.

As Opening Day approaches, keep an eye on the Orioles’ bullpen construction. There isn’t enough room for the team to keep left-handers Wright, Matusz and MacFarland. A trade seems likely for Matusz as the injury-riddled New York Mets are reportedly interested. There’s also the possibility that Garcia could develop some sort of muscle pull or strain that leads to a brief trip to the disabled list as the front office tries to sort out the bullpen. The makeup of the Opening Day 25 man roster is further impacted by the possibility that Matt Wieters could open the season on the DL. Wieters recently had a setback in his return from Tommy John surgery. After years of the Orioles having trouble just assembling a viable five-man rotation, and often failing, the team now has a much better set of troubles.