Nothing but Ironweed on March Madness hardwood. 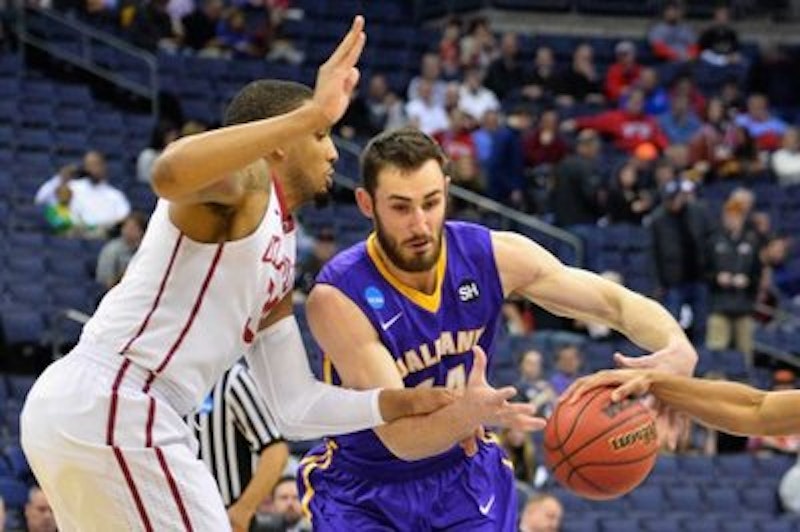 As a chronicler of teams and towns destitute of victory, I decided it was time to go to Albany. It was the first day of spring. It was snowing. Of course it was.

The clarion call was the fact that the Great Danes of SUNY Albany were aligned to play third-seeded Oklahoma University in the NCAA March Madness basketball tourney. The Danes are not really losers, per se, which kind of takes them off my beat. They’ve booked three straight conference titles, three straight trips to the Big Dance and five overall since 2006. Last Friday night’s game was not played in Albany, but in another hellhole known as Columbus, Ohio. I was going to Albany to watch the game at a campus bar, soak in the atmosphere and maybe run into novelist William Kennedy who happens to work for the University of Albany outfit. The Danes were seeded 14 in their region, hoping to continue the early tournament storyline of 14s upsetting 3s.

In four tries, Albany has never won a round of 32 game. They won a neato play-in game last March, beating Mt. St. Mary’s to earn an official bracket slot against the Florida Gators who then sent them packing. And as the massive OU backcourt prevailed 69-60 Friday night in Columbus, the Danes tallied their fifth straight loss in the first round of March Madness.

College campuses spend a good deal of time on CNN these days, thanks to incidents like the chant in Oklahoma and the bloody arrest outside a bar on the Charlottesville campus of the University of Virginia (a 2-seed in the tourney still kind of reeling from the Rolling Stone fictional gang rape story). The Sooners promptly ended an Albany dream buoyed by a game-winning three-pointer in the championship game of the America East Conference tournament. The Australian Peter Hooley hit the Hail Mary shot at the buzzer, sending Albany to the Big Dance, and he’d just lost his mother to cancer a month earlier. It was the less comical of the buzzer beaters making the viral circuit. By the time I got to Albany, I had seen at least 83 replays of the injured Georgia State coach plummeting from his chair in disbelief that his son had just singlehandedly upset Baylor in the first round.

I dug up a campus bar, the Washington Tavern, as my viewing headquarters right there on the porch-heavy section of Western Ave. Sure, most of the student body was away on Spring Break, but I had to get into the belly of the beast—the trenches—among the chicken wing bones and Bud Light aluminum bottles with necktie-wearing jarhead bartenders craning their necks to watch a replay while pouring. I had to bear witness to either an upset-miracle with an Australian encore, or crushing defeat to an NCAA Big 12 powerhouse. The University of Albany has roughly 12,000 students, while OU’s got 30,000 on file in the registrar’s office out there in Norman. Go ahead and do the David vs. Goliath math, if you can.

The sidewalks of Western Ave. and other Albany side streets hadn’t seen many footfalls so they were treacherous with sleet as I found a parking space between a giant liquor store and a ratso bodega around the corner from the Washington Tavern. The bodega had no steps, but instead a rigged wooden ramp zip-tied to a few milk crates with a frozen rug sliding off the top of it. One three-foot drop later, the personal injury lawyers would appear like magic. I safely climbed into the store searching for a hard copy of the Albany Times-Union—a truly laughable mission on so many fronts.

The aforementioned William Kennedy—who has featured Albany prominently in his work through the years—wrote in an essay in which he had the line: “Maligning Albany is a very old game.” Never mind that half of his turn-of-the-century Albany characters are impoverished rag collectors or semi-retired prostitutes groaning about lumbago. From the government corruption to the space age skyline to the always crappy weather, yes, it is easy to beat up on Albany. And why not?

The locals were antsy about the scheduled 7:27 pm tip being moved to 8:17 p.m. This meant I had some time to kill once inside WTs as it is known in the vernacular of the capital city. College bars illustrate one thing: groups are still the norm. They sit among empty pitchers and split the check 23 ways, which is always cause for a most ungraceful exit. To be a middle-aged guy not wearing any college attire walking in solo brings immediate scrutiny from the faculty couples at the bend in the bar or the bands of co-eds all wearing the same purple t-shirts taking up a table in the hallway leading to the rear of the bar. Loners never do well in places like Albany. This is where the newspaper comes in handy. You arrive solo and the music stops and everyone looks at the stranger in the doorway and you simply glide to the wood and plop down your newsprint and go about your business turning pages without having to return the stares.

The square footage of the Washington Tavern is hard to gauge by eye. It’s got two or three giant rooms to the rear with another smaller bar available in a side room. Several groups had already mustered back there and waitstaff seemed to materialize out of nooks and crannies. I found a good campsite at the bow of the bar just under a decent television and within left and right peripheral vision of two more monitors. No one could solve the start-time delay mystery, but all was well on TruTV when the first image of the UAlbany mascot Damien—a guy with a giant Great Dane head—flashed onto the screens. Cheers from the co-ed group, which was basically four girls who looked a lot like Daria. With the sound off, even announcer Ian Eagle got a big hand from the bar crowd that was suddenly quite eager starting to come together and gain voice.

To my left a couple arrived, replacing a crusty pairing who both looked like ex-cops and gave me the fisheye for a solid 20 minutes until they noisily settled their check and under-tipped. The new couple was a substitute teacher type still wearing her St. Patrick’s Day green t-shirt and her husband who (I am guessing) used to run a record shop but had to sell it when they got married and now he does reluctant but well-paid tech support for a local corporation. His black t-shirt had a skull on it and “Maggot Brain” written below the image. As Albany coach Will Brown’s angry insurance salesman countenance appeared on the TV, ex-record shop guy yelled out “Where’s your blazer? Get a jacket for crying out loud!” Coach Brown was indeed wearing only an open-collar tattersall dress shirt as apparently he was savvy to the fact Casual Friday was pretty much invented out there in Columbus.

The bar suddenly went into happy hour mode and drinks were two-for-one or some type of deal requiring a paralegal to sort it out. An unspectacular chicken quesadilla was endured. As the game started I noticed a good mix in the room. Six guys from a black fraternity had gathered in the very front tables wearing derbies and fedoras. The Darias were starting some type of Australian chant, there appeared to be a gaggle of middle-management government employees lining the back wall. There were odd and even pairs of “bros”—the young white guys wearing the backward Mitchell & Ness Brooklyn Nets caps and a trio of gamester types with non-ironic beards and large backpacks. Another solo cat entered. He was an Asian chess club guy confused by the drink deal and only looking for one, not two, as Oklahoma started hitting threes to open up a double-digit lead over Albany.

“Singletary is my boy!” shouted one of the Darias as Albany’s Evan Singletary made a nice run and actually created a shot against the much bigger Sooners. There were several baskets that brought Ben Hur type cheers from the back rooms with the sound drifting through the labyrinth to the front bar. It was a collective cheer, something to be craved as a spectator of televised sport after a long winter of watching hockey alone. With their team down nine at the half, the Albanians calibrated their mobile devices as if to find out why the rim was so stingy in Columbus whenever Albany attempted a lay-up or why WTs is overly lit and if they do in fact use the same citrus disinfectant chemical employed by Show World in Hell’s Kitchen long ago.

As the Danes never really got close to Oklahoma in the second half, the magic act had packed up. The Darias were starting to drop loud f-bombs and it was time to hit the icy sidewalks again. Friends had just opened their own tavern up in Ballston Spa, and I was late getting up there thanks to the TruTV tip-off delay and the endless commercial timeouts. At a Price Chopper in Malta, the elusive Albany Times-Union was found. Its wood was an attempt at a purple background screen that came off kind of sky blue instead on the color register. Banner headline in 90-point type: “Let’s Dance.”

When I finally arrived at Carson’s Woodside Tavern, the newspaper was not needed. I toasted their perfect placement of flatscreen TVs at standing eye-level along a far wall and watched as the Providence Friars disintegrated from the tournament. Providence—another underdog city, this time losing to the Ohio badass town of Dayton. March Madness is anti-glam because places like Lexington, Kentucky and Spokane, Washington are represented. Nothing New York or L.A. or South Beach about it. And of course the Final Four is in wholesome Indianapolis this year, the corporate home of the NCAA and Hoosiers country.

Which team’s coach will bring the tape measure to the heart of Indiana for the really big game? Well, in my view from the slick gutters of Albany, I’m betting on Arizona.