Ryan Howard’s a Poor Fit for the Orioles 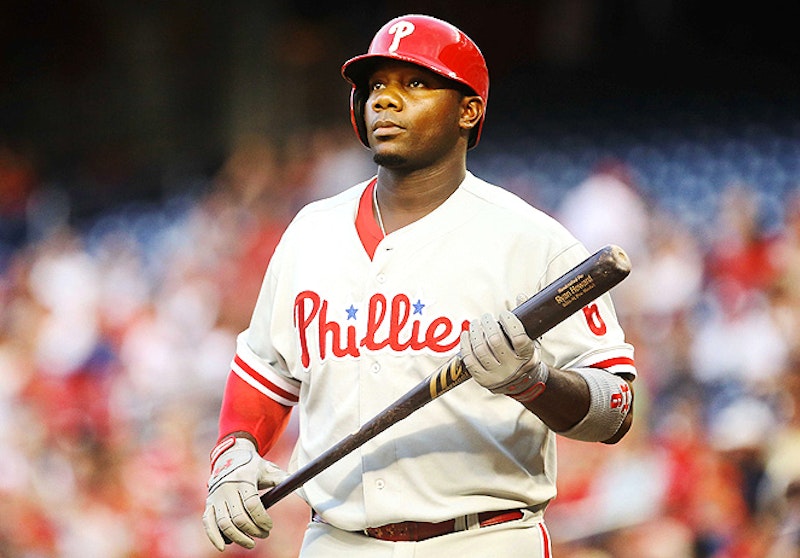 The Philadelphia Phillies are a mess: the team that finished atop the National League East each season from 2007-2011 is on life support. A third-place finish in 2012 was followed by two sub-.500 seasons. The sins of the Phillies’ recent past were committed in a desperate attempt to remain a contender. Prospects were traded for rentals, aging players were signed to lucrative long-term deals, and little attention was paid to the future. The future has arrived for Philadelphia and fading star Ryan Howard is its unfortunate poster boy.

The Phils still owe Howard $60 million for the 2015 and 2016 seasons. The team is so anxious to move on that they may be willing to pay as much as $50 million to unload Howard. Philadelphia’s willingness to dump Howard and the Orioles’ apparent need at DH has led some analysts to suggest a Howard-to-the-O’s trade. That makes little sense for Baltimore.

The Orioles lost Nick Markakis and Nelson Cruz through free agency and did little to replace either player. The team basically acquired Markakis’ replacement last August when they traded for Alejandro De Aza. The team is also high on Triple-A outfielder Dariel Alvarez. Cruz and his league-leading 40 homers will be harder to replace but there’s a plan for that as well. The return of Chris Davis, emergence of Steve Pearce, re-signing of Delmon Young and trade for Travis Snider gives Buck Showalter plenty of options at designated hitter. Howard would be redundant.

A trade for a one-dimensional, aging slugger like Howard flies in the face of the Orioles’ recent focus on roster and lineup flexibility. Showalter and Dan Duquette covet players who can play multiple positions and value bench and bullpen players with minor league options, which effectively give the Orioles a 25-man roster with a four- or five-man taxi squad. Howard can only play first base, which he’s done poorly for the bulk of his career. And for anyone suggesting that last year’s one-year deal for Cruz suggests the Orioles may be interested in a similar move for Howard should check the stats. Cruz was coming off a suspension-shortened 2013 season in Texas that saw him slam 27 home runs with a .833 OPS. You have to look back to 2011 to see similar production from Howard.

Adding Howard would reduce the Orioles roster, bench and financial flexibility. My guess is that Showalter would rather have the 26-year-old Jimmy Paredes, a switch-hitter who can play all over the diamond, on his roster than a faded star with no defensive value. If the Orioles have $10 million to spend on Ryan Howard they’re better off holding onto those funds for a more meaningful in-season trade.