The former Oriole was a superb lead-off batter. 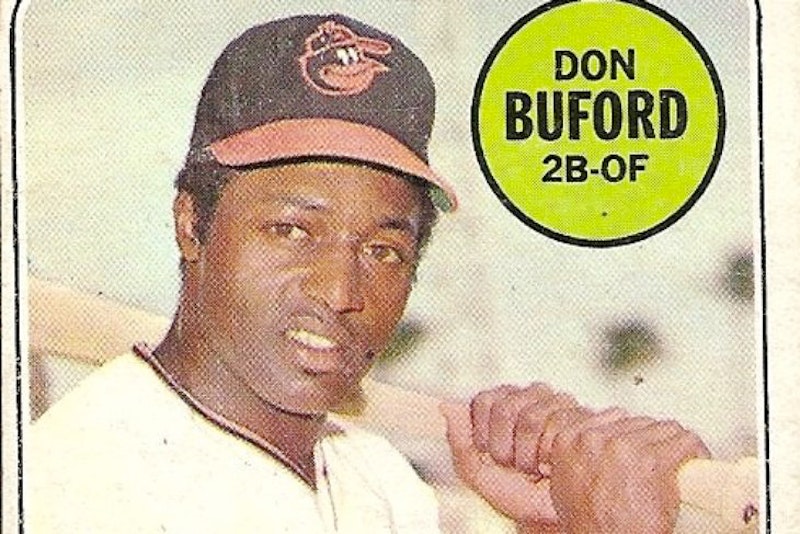 The departure of Nick Markakis left the Baltimore Orioles with a question mark at the top of the lineup. Markakis wasn’t exactly Rickey Henderson leading off games, but he was a professional hitter with gap power and an ability to work the count. Markakis was consistent and he’ll be missed. The Orioles hinted at a number of potential leadoff hitters over the winter, but three weeks of Spring Training has done little to quell Baltimore’s leadoff concerns.

A glance at the O’s current leadoff options (Alejandro De Aza, David Lough, Nolan Reimold) led me to pine for the days of Brady Anderson. Before the recent run of Markakis it was Anderson’s decade atop the Baltimore batting order that served as the gold standard. Anderson was no doubt the most impactful leadoff man in Orioles’ history, but the often-overlooked Don Buford had a remarkable run as the O’s primary leadoff hitter from 1968-71.

Most Orioles fans my age (38) probably best remember Buford as Damon’s dad, or as a nice old man who signed their baseball at Fanfest. That’s generally the extent of my Don Buford knowledge. I met him once at a baseball card show as a teenager. He signed a picture for me: I probably said “Thanks!” in my cracking voice and went on my way. The rise of Damon Buford through the Orioles minor league system in the early 1990s as a speedy center fielder brought Don Buford back to the forefront. Damon went on to have a successful Big League career playing for five teams over nine seasons but he never had the impact of his dad.

The Orioles traded Luis Aparicio to the White Sox for Don Buford and two others prior to the 1968 season. Buford had generally been an average to below-average hitter as an infielder during his five seasons in Chicago. The trade to Baltimore gave Buford a full-time role in the outfield and at the top of the batting order. Buford went on to become an on-base machine in Baltimore with his on base percentage twice topping .400. In his first four seasons with the O’s, Buford posted OPS+ of 144, 128, 126, and 153, meaning he was at a minimum 26 percent better than the rest of the league’s batters during that time. Buford also scored 99 runs three seasons in a row and helped the Orioles defeat the Reds in the 1970 World Series. Don Buford at the top of this current Orioles’ lineup would make them American League East favorites.

The 2015 Orioles don’t have a Buford, Anderson, or even Markakis to set the table. Alejandro De Aza seems like the odds-on favorite to be handed the job on Opening Day but there’s no guarantee he’ll hold onto it. I’d like to see Buck Showalter give Steve Pearce or Manny Machado a chance in the leadoff spot. Machado is a free swinger with just average speed but he has developing power and is likely to emerge as Baltimore’s best hitter in the next season or two. Machado had a slightly improved walk rate in 2014 and started converting some of his doubles to homers before requiring knee surgery. If Showalter is going to give anyone on this roster 700 plate appearances I’d rather it be Machado than De Aza or any of the other internal options.