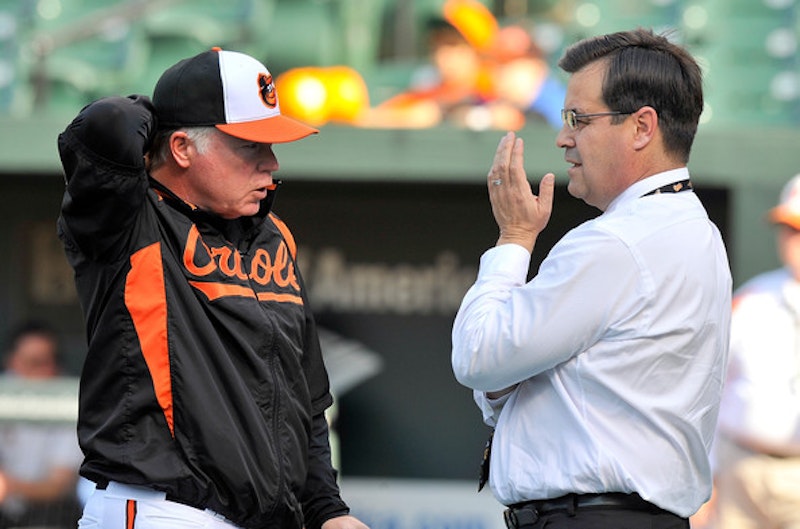 The Baltimore Orioles are a pretty good baseball team, which isn’t so bad after a decade and half of laughingstock status. Still, fans expect more: more stars, bigger payroll, and most of all more pitching. Despite a solid core, financial flexibility, and some glaring weaknesses don’t expect much from the O’s this winter.

If there’s anything we’ve learned from Peter Angelos’ two decade reign at the helm of the Orioles franchise it’s that he won’t commit a long-term contract to a free agent pitcher. Angelos has yet to allow a major financial commitment or a deal in excess of three years to a significant free agent starter. Don’t expect him to start now. The Orioles have a solid though unspectacular starting rotation of Chris Tillman, Wei-Yin Chen, Miguel Gonzalez, and Bud Norris. The acquisition of a frontline starting pitcher would push each of the aforementioned hurlers down in the rotation and greatly strengthen the team’s chances to compete in the tough American League East. While O’s fans want an acquisition along the lines of Matt Garza, David Price, and Japanese import Masahiro Tanaka, Dan Duquette’s front office will once again head to the thrift shop.

I’m not going to fault Duquette. Each of the pitchers listed above would come at a considerable cost and risk. Garza isn’t a true ace but will probably secure a contract in excess of five years that could approach $100 million. Price, who won’t be eligible for free agency for another two seasons, would require an intra-division trade with the Rays and the type of prospect-laden package that the Orioles can’t realistically construct. Tanaka may be the best thing since Yu Darvish (though reports on him seem fairly mixed) but his signing would require an investment of over $100 million, a number that Angelos’ Orioles have never topped.

The Orioles were recently ranked as one of the 10 richest franchises in baseball according to a Forbes.com report. The problem is that the Orioles are still run like a mid-market club despite the financial success of the Mid Atlantic Sports Network. It’s the owner’s prerogative how to spend his cash. Fans don’t have to like it, but they have to live with it. The looming free agency of catcher Matt Wieters and first baseman Chris Davis is another obstacle for Baltimore’s braintrust. The duo, both represented by the much-reviled and ultra-successful Scott Boras, are eligible for free agency following the 2015 season. The Orioles will likely have to choose between the two and perhaps look to deal the odd man out. Wieters has been rumored to be on the trade block this offseason. The Orioles next big money long-term contract will either go to Davis or Wieters and not a frontline starter.

Orioles’ fans should prepare themselves for a winter filled with a lot of talk and little action. As usual. Baltimore will be mentioned as a potential suitor for many of the top free agents, the term “sleeping giant” will be used often in reference to the O’s, and ultimately they’ll end up re-signing Scott Feldman or taking a flier on a pitcher coming off an injury (Scott Baker or Tim Hudson?) on a short-term deal. Despite the Orioles’ recent on field success, and the cash infusion sparked by controlling a regional sports network and the rights to the Washington Nationals’ television broadcast rights, the next great Orioles hurler will come from the much discussed duo of Kevin Gausman and Dylan Bundy rather than an expensive free agent pursuit, farm system depleting trade, or high risk Far East import.