Texas GM Jon Daniels can do whatever he likes. 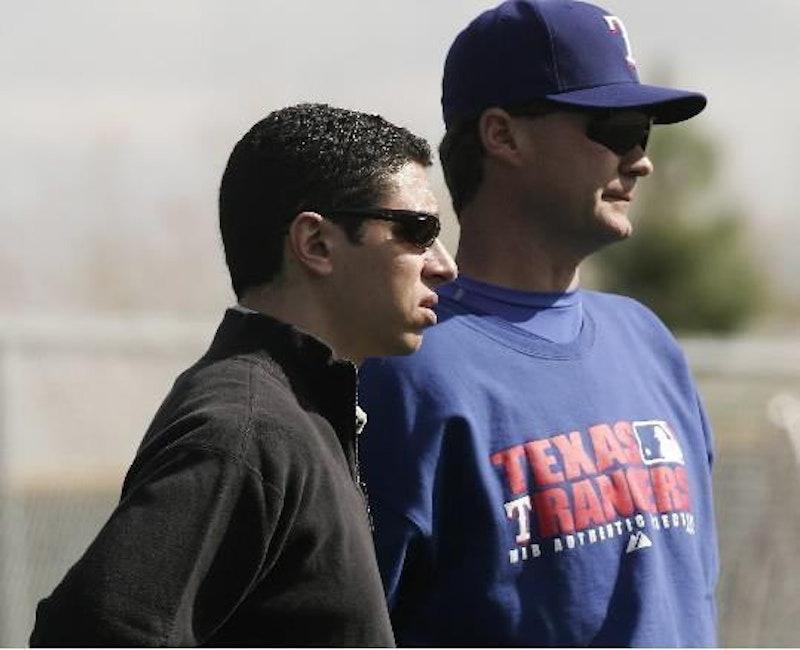 The Texas Rangers can acquire anyone they want this July: Zack Greinke, Justin Upton, Felix Hernandez (!), or no one. GM Jon Daniels is in complete control. Texas has the second best record in the AL and a farm system full of top prospects: they’re in control of negotiations. The market may be favorable to sellers this year, but the Rangers have the benefit of having an excellent all-around ballclub, and even taking Colby Lewis’ season ending injury into account, they don’t have any glaring weaknesses.

With Adrian Beltre entrenched at third base, prospect Mike Olt can either shift across the diamond or transition to the outfield in order to avoid obsolescence on his current team. Or, the Rangers trade him. Olt’s name has been thrown around liberally over the last month, and when you take his .287/.397/.580 slash line (with 26 home runs), it’s not difficult to see why. The 23-year-old was previously dubbed untouchable, but recent reports suggest that he could be made available for Miami Marlins pitcher Josh Johnson, or another controllable hurler of his caliber. Phillies lefty Cole Hamels, even though he would’ve only been a rental, could have probably pried Olt away from Texas. Now that Philadelphia has extended their ace, the point is moot. The sentiment still stands, however, and a top-of-the-rotation starter could send Mike Olt packing.

Jurickson Profar, the highest ranked prospect in baseball, is truly untouchable. No one short of Mike Trout or Bryce Harper could separate Texas and their future shortstop. Scouts and stat sheets love the 19-year-old, who’s already succeeding at Double-A, the same level Olt is currently thriving in. Profar does everything well: he excels offensively, defensively, and off the field. Elvis Andrus will need to start adjusting to either a new position or a new team, because Profar is on the fast track to the big leagues.

Jon Daniels can stand pat past the deadline. His team is more than equipped to handle the playoffs and another World Series run. An added boost would help, though. Greinke will be in high demand this week, for obvious reasons. The right-hander may have his share of issues (past anxiety disorder, present attitude problems), but his 2.50 FIP is hard to ignore. Additionally, acquiring Greinke could also act as a two-month audition for the team, to see if he’s up to the challenge of pitching half his games in the hitters haven of Arlington.

Felix Hernandez isn’t technically available, but Mariners GM Jack Zduriencik has hinted that he’d consider trading The King. Any potential Hernandez deal would require a hefty return, especially since the two teams play in the same division. Still, with Texas’ bevy of talent, a deal could be reached without Profar thrown into talks.

Every year the trade deadline has a couple surprises (see: Jake Peavy trade, 2010), so don’t rule any scenario out. The point is, the Rangers have the pieces to make whatever deal they want, whether it’s for a superstar or cost-controlled reliever.