The Nationals Are Smart to Shut Down Strasburg

Looking to the playoffs with the best possible lineup. 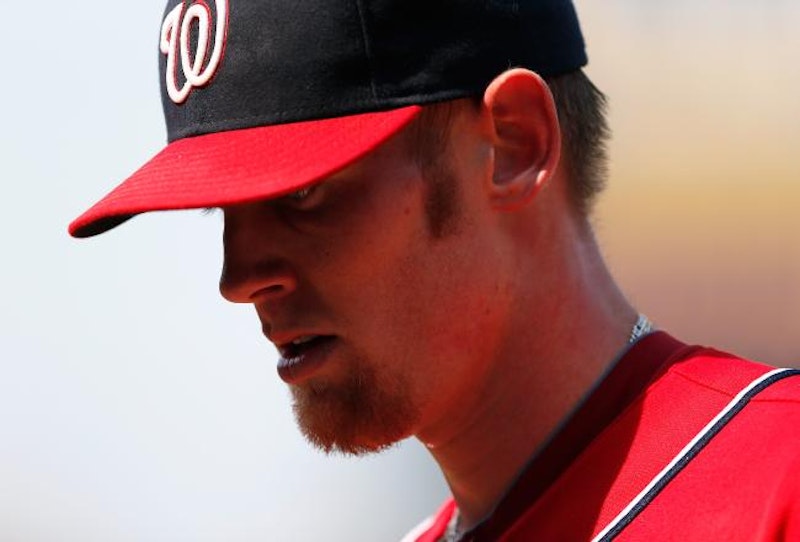 The Washington Nationals' plan to shut down starter Stephen Strasburg when he reaches 160 innings has been met with equal parts criticism and skepticism. The thought that a first-place team would voluntarily shelve one of the league's best pitchers is counterintuitive. I was a skeptic early on, but as Strasburg closes in on 160 innings his eventual shut down seems like a near certainty.

The Nationals were rumored to have interest in Cubs' starter Ryan Dempster prior to the July 31 trade deadline. Dempster seemed like a perfect fit for Washington. He's an established veteran with playoff experience and a free agent following the season. Dempster could have slid seamlessly into the Nats' rotation and pushed Strasburg to the sidelines in early September. The decision to pass on Dempster, and other starters like Zack Greinke and Wandy Rodriguez, may seem like another curious move to anyone who hasn't followed the team.

Strasburg leads the National League with a staggering 11.4 strikeout per nine innings.  He's 11-5 with a 3.12 ERA on the season, but two of his worst outings have come in his last three starts. He’s already logged 121 innings in 2012. His career high in innings pitched between the professional and college levels was 123 innings in 2010. His season was cut short when he required Tommy John surgery. It's possible that Strasburg is already running out of gas. He may be a box office attraction but at this point in the season Strasburg isn't even the best former Tommy John surgery survivor on his own team.

Jordan Zimmermann, a 26-year-old right-hander and 2009 Tommy John patient, is having the best season of his career. Zimmermann is 8-6 with a 2.28 ERA and a 1.06 WHIP in 21 starts. He's emerged as the Nationals' best pitcher over the past month allowing one or fewer runs in seven consecutive starts. In 21 starts in 2012 Zimmermann has registered a quality start 19 times.

Washington dealt a package of impressive prospects to the Oakland A's over the winter to acquire Gio Gonzalez. The left-hander has not disappointed. Gonzalez has a record of 13-5, allowing just 89 hits and six long balls in 124 innings. Gonzalez and Zimmermann will likely start the first two games of the playoffs assuming Washington can hold onto its lead in the National League East.

Washington has also received excellent pitching performances from Edwin Jackson, signed as a free agent in the offseason, and youngster Ross Detwiler. Jackson is playoff tested but Detwiler, 26, may be the Nats' secret weapon. The former first round pick lowered his ERA to 3.02 with seven shutout innings against the Phillies on Thursday.

The dominance of Zimmermann and Gonzalez, coupled with the performance of Jackson and Detwiler, allows the Nationals to act prudently in shutting down Strasburg while still printing playoff tickets. Dempster was a need for the Rangers but he may have been Washington's fourth or fifth starter. Nats' GM Mike Rizzo will no doubt be roundly criticized when Strasburg is shut down for the season, but he's put the franchise in an excellent position to carry on into October with the National League's best starting rotation.