Even with a little bad luck, the Cubs still managed to come on top. 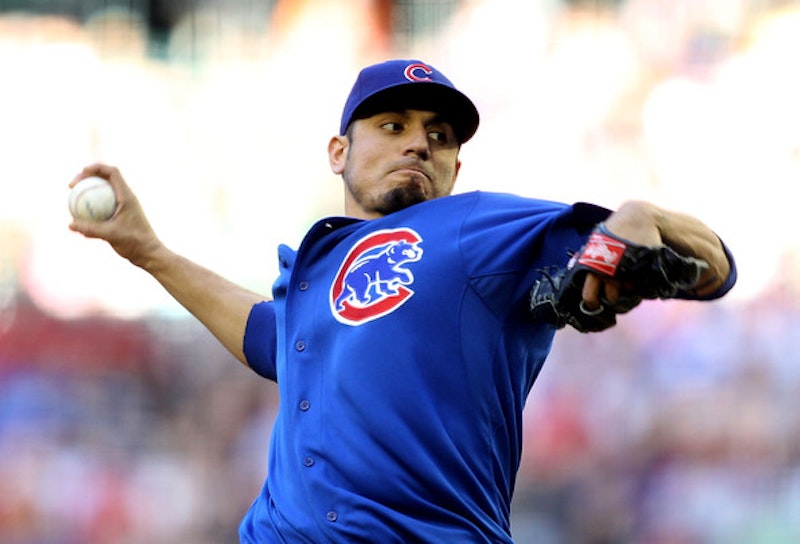 Chicago Cubs president and head of baseball operations Theo Epstein was recently struck with a skein of bad luck: Matt Garza’s tricep injury and Ryan Dempster’s sudden aversion towards the state of Georgia. Even though Chicago didn’t wind up with the glut of prospects they originally thought they’d be adding to their newly improved farm system on July 31, the team still managed to come out on top and improve the future outlook of the club.

Epstein and GM Jed Hoyer probably aren’t on good terms with Dempster. The right-hander had previously approved the Braves as a desired landing spot in any potential trade, listing Atlanta Number Two on a list of teams he’d like to play for, right behind the Dodgers. Well, when a deal was completed (a quite good one, I might add), the former reliever got cold feet, stating that he would now only approve a trade to Los Angeles. The problem is, he said that to the media. Not only did the original deal fall apart, but so did any leverage that the Cubs initially had. Oops.

It kind of worked out in the end, because, in the face of spending the rest of his season with the 43-59 Cubs, Dempster expanded his selective list to include the Rangers and Yankees. Texas acquired the pitcher for starter Kyle Hendricks and, more importantly, infielder Christian Villanueva, who ESPN’s Keith Law describes as having “major league potential as a plus defender with doubles power.” Top pitching prospect Randall Delgado, who the Braves had offered, would have represented a better return and addressed a serious organizational need for the club. Still, Villanueva fits the bill as the high upside minor leaguer Epstein and Hoyer were looking to acquire. As a pretty lucrative silver lining, had Dempster not reneged on his original trade list, the Braves would have never foolishly surrendered Arodys Vizcaino for Paul Maholm (the most average pitcher on the planet) and Reed Johnson (a fourth outfielder). Vizcaino, who is shelved for the year due to the increasingly common Tommy John Surgery, ranked as the 14th best prospect in baseball on Law’s top 100 list this winter.

The real bummer for Cubs fans is that Matt Garza wasn’t traded. Had the right-hander been injury free, Epstein would’ve needed another cellphone just to receive all the calls. Honestly, who knows why, because Garza isn’t that great. The 28-year-old is a solid number 3, but that’s it. Regardless, the Dodgers, Reds, Yankees, Red Sox, Diamondbacks (that one was weird), and a slew of other teams were reportedly interested. Looks like Epstein will have to wait till the offseason.

Either way, the trade deadline of 2012 can be viewed a success for the Cubs, even if the team didn’t get exactly what they wished for. Fans should be exited; the new regime has morphed the Cubbies from an utter joke to an up-and-coming force. The farm system, which was recently barren, is now stacked with high-upside talent like shortstop Javier Baez, outfielders Jorge Soler and Albert Almora, first-baseman Anthony Rizzo (who is showing off his ability on the major league club), and the newly acquired Villanueva and Vizcaino. The Cubs will contend again before you know it.