Rangers Let the Tigers Off the Hook 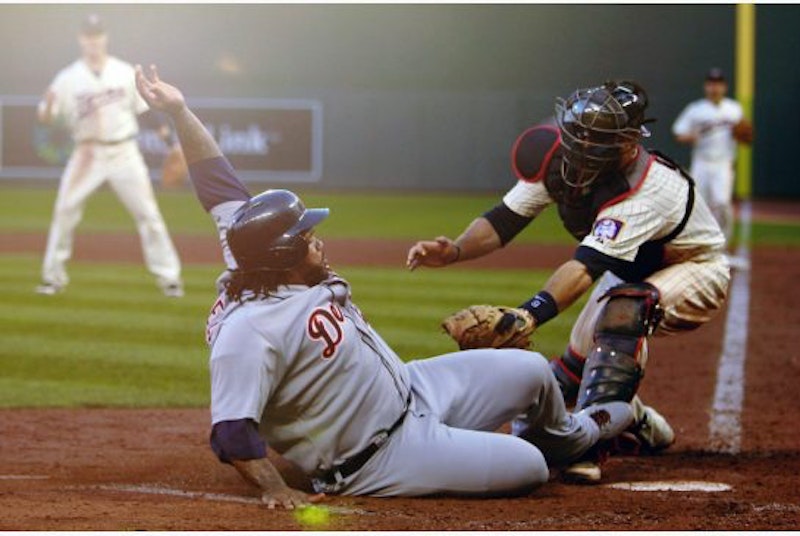 Two years ago the Detroit Tigers, in a moment of weakness and desperation following a knee injury to Victor Martinez, handed free agent slugger Prince Fielder a nine-year contract worth $214 million. The signing shifted 1B Miguel Cabrera to the more demanding hot corner and gave the Tigers two of baseball’s most feared sluggers. Now, after flopping in the postseason Detroit has sent Fielder to the Texas Rangers for 2B Ian Kinsler. The deal serves the Tigers on several fronts.

As the baseball hot stove cranked up the talk was that Detroit would entertain offers for AL Cy Young Award winner Maz Scherzer. The 29-year-old Scherzer is set to become a free agent following the 2014 season and with Cabrera, Fielder, Justin Verlander and Anibal Sanchez signed to expensive long-term deals the prospects for retaining Scherzer seemed dim. The Fielder trade frees the Tigers from one of those deals and could provide the flexibility to retain Scherzer, or sign a suitable replacement next offseason.

The Fielder trade also brings a much-needed leadoff hitter to the top of the Tigers’ order with the acquisition of Kinsler. The former Texas Ranger and three-time All Star has a career .349 OBP and a much higher contact rate than Austin Jackson, Detroit’s incumbent leadoff man. Jackson was ultimately dropped to eighth in the order during playoffs due to his struggles. Kinsler’s addition also bolsters the Detroit defense. The second sacker has accounted for a defensive WAR of 8.0 during his career, including a dWAR mark of 1.5 in 2103. Kinsler will replace free agent Omar Infante at second base and should form a dependable keystone with defensive whiz Jose Iglesias. The subtraction of Fielder will allow two-time reigning AL MVP Cabrera to shift to the more appropriate and less physically demanding first base. Moving Cabrera across the diamond should help to keep the slugger healthy while freeing up third base for rookie Nick Castellanos. The Tigers moved the highly-regarded Castellanos to the outfield in Triple-A last season but he figures to revert back to third base now and could start the 2014 season in the big leagues. Castellanos, Detroit’s top prospect, slammed 18 home runs and 37 doubles in 134 games for Toledo in 2013.

Prince Fielder became the face of Detroit’s postseason failures of the past two seasons. Fielder was a total non-factor in the playoffs for Detroit, tallying a single home run and three RBIs in 24 games over the past two Octobers. He took the blame for Detroit falling to an inferior Red Sox club in the ALCS and the lasting image of his time in Detroit will be his large frame sprawling across the Fenway third base line as his mad dash back to third base came up a few feet short. The Rangers, looking for a slugger to replace Josh Hamilton, are hoping that Fielder’s regular season production will propel the franchise back to the playoffs. They’ll worry about October if they get there. The Tigers on the other hand were no longer happy to simply be a part of MLB’s postseason and are hoping that the trio of Kinsler, Castellanos, and Scherzer will deliver more long-term value and playoff success than one expensive one-dimensional slugger.