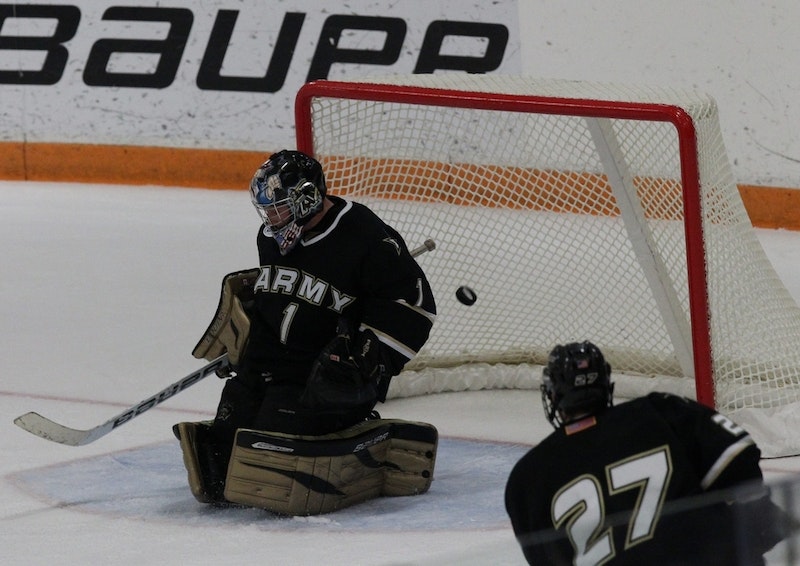 Sometimes you have to drive to Danbury, CT, to find out what is wrong with the Army hockey team. How can they be 1-10 at this point in the season? The Black Knights’ token victory over somewhat lowly Sacred Heart University a few weeks ago was avenged by the Pioneers last Friday night at West Point when the cadets blew a 3-0 lead only to lose 6-5 in the final three minutes of the game. Damn Army hockey games start too early for a dayshift taxi driver to get down from Northern Dutchess county past Storm King Mountain in time for the 7:05 p.m. puck drop. So you have to wait for the Saturday night end of the home-and-home played on the relatively neutral ice of Danbury, since Sacred Heart—the main campus being in Fairfield—play home games all over the Nutmeg State.

One night it’s Milford, then the next game is in Bridgeport and now Danbury, just off Interstate 84 near the New York state line at the northern fringe of the NYC commuter belt.

Ritualistic college football is one thing at West Point, but the hockey is a whole different animal. Tate Rink is fine and all, with lots of defense contractor-type adverts on the boards (McDonnell Douglas, Boeing, etc. in place of the usual Geico and McDonald’s logos). And instead of the usual rah-rah pre-faceoff bursts of The Offspring over the P.A., monastic silence tends to prevail. It is the standard-issue respectful competitive environment harbored by the U.S. Military Academy tradition dating back to Aaron Burr or whoever, so the overall Army hockey experience is quite sober. And if you are more accustomed to Marist hockey or the Garden or even the Hartford Whale, Army hockey comes off as Masterpiece Theater without the leather chair.

My first trip to West Point for hockey was actually a bit of a stunner as once I was through the intense security checkpoint I found the dark parking lot near the Tate Rink riddled with tipped over trash cans and workaday detritus. Expecting the spit-shine precision promised by Army Sports marketing types, I was reminded instead of the civilian lack of honor and discipline. The usual inky-black Hudson Valley night did not help my vision, so it looked like the West Point campus could have easily been an auxiliary green at Manhattan College or some fieldhouse lot at Iona. With the Army vs. Navy gridiron clash not scheduled until Dec. 14 this year in Philly, it is good for Americans to know the Army hockey team stinks.

Navy hockey, meanwhile, is coasting with an 11-5 record and an early October clash between Army-Navy on the ice was cancelled due to the government shutdown. They have since rescheduled for March, but by then Army hockey might be suffering more than the wretched Buffalo Sabres of the NHL and ensconced well within the cellar of the Atlantic Hockey Association, barely in sight of conference leaders Air Force. And for the Cadets, that’s almost a worse sin than lying, cheating or stealing (and tolerating those who do.)

The Army hockey problem seems to be puck handling, as was in evidence Saturday night in Danbury. The Black Knights had trouble connecting more than two passes per play and often simply lost possession of the puck while skating solo through the neutral zone. But if you ask the father of Army forward Shane Hearn, the snag for this year’s team is youth. “We’re young,” he says standing along the boards next to the Danbury Ice Arena penalty box. Checking the roster reveals only one senior skating for the Black Knights, captain Brian Schultz. “But if you look at the games we’ve played, except for BC, we’ve been there—been close—in almost every game,” Mr. Hearn says. The BC he refers to is nationally-ranked Boston College where Army received an 11-0 drubbing in front of 5500 fans on a Sunday afternoon in Chestnut Hill in early November.

Mr. Hearn identified himself after his son slammed a Sacred Heart player into the plexiglass right in front of us. “That’s my son! When you’re small like that you gotta be a scrapper!” Soon there was a gaggle of hockey dads along the boards and there was talk of the Black Knights being better on the road because the military routine of West Point was not in effect at the Motel 6. “They can sleep in until nine instead of getting up at five,” one father said. Army notched its first win against Sacred Heart at Bridgeport two days after the Chestnut Hill massacre. But the suffering continued last Saturday in Danbury as the Pioneers outsized the freshman-heavy Black Knights and won 4-1 in front of 624 onlookers, including the low-energy Sacred Heart pep band. The Danbury Ice Arena is a great place to watch a game. There is that certain Connecticut efficiency to it.

The only excruciating detail from Saturday was the Zamboni driver clad in shorts. That is just wrong. Standing near center ice near the penalty box is a fine close-up vantage, and as the Army team unraveled in the third period with two players receiving game misconducts for hitting from behind and elbowing, there was ample opportunity to examine these specimens. There is, of course, a scary sameness to the Army team. Identical haircuts under the helmet, skin color consistent. They have perfect well-groomed brows and long eyelashes. Flushed faces. They are silent: even the captain stands dutifully near the ref’s circle waiting to hear his teammates’ punishment, stoic and staring ahead like Kurt Russell in the 1998 movie Soldier.

Seeing junior defenseman Maurice Alvarez spring from the penalty box and gracefully blend into an odd-man rush toward the Sacred Heart goal was like being on a hockey safari and catching sight of a springbok in full stride. The Army hockey dads were glad to see Alvarez playing more like a forward, and listed as six-foot-two, 220 pounds, they called him a “gentle giant” which isn’t always a hockey compliment. If the Black Knights had three or four more Maurice Alvarezes, they might carry the appropriate air of menace required to succeed in this sport. Another glance at the Army roster reveals a built-in, permanent fault: zero Canadians. For Sacred Heart, half the roster hails from Canada.

Army was shut out until late in the third period when Shane Hearn himself scored on a disorganized power play. With two minutes remaining until Army was assured double-digit losses on their record, the crowd seemed to finally get the joke foisted into the air by the Sacred Heart band. They had been playing the intro to The White Stripes’ “Seven Nation Army” throughout the period, concluding with a full version of the song at game’s end.