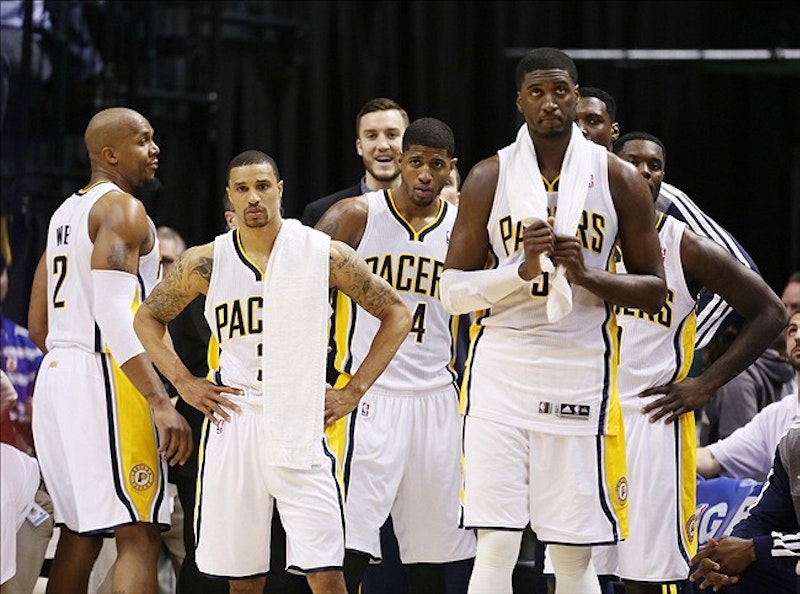 The Indiana Pacers’ 13-1 start has them atop the NBA’s Eastern Division Standings. The Pacers are building off last season’s success that saw them push the Champion Miami Heat to a seventh game in the Eastern Conference Finals. While Miami’s East Coast version of the Lakers’ Showtime was built through shrewd contract construction and heavy recruiting efforts, the Pacers have built a contender the old-fashioned way.

In a league increasingly dominated by superstars the Pacers may be the league’s best team without such a player. Small Forward Paul George is the closest thing Indiana has to a star but the third-year player has toiled in the Midwest after playing his college ball at the unheralded Fresno State. George is a fine player but he lacks national name recognition. George, who was selected 10th overall in the 2010 draft, leads Indiana in scoring and has outperformed fellow 2010 lottery picks John Wall, Gordon Hayward, Evan Turner, and Wesley Johnson.

George is joined in the Indiana frontcourt by free agent import David West, formerly of the New Orleans Hornets, and 2008 draft pick Roy Hibbert. West provides some scoring punch and rebounding up front. Hibbert has developed into one of the league’s best big men over the past several seasons. While Dwight Howard tortured franchises with his indecision, Hibbert’s ascension to a shot-blocking and rebounding force went largely unnoticed. The seven-footer was overlooked when he entered the league out of Georgetown and lasted until the 17th pick in the 2008 draft when he was selected by Toronto. The Pacers shrewdly shipped aging veteran Jermaine O’Neal to the Raptors for the rights to Hibbert. Patience and forethought have paid off for Indiana as Hibbert now leads one of the NBA’s best teams in rebounding (8.9) and blocks (4.1).

The Indiana backcourt features another pair of interesting players in PG George Hill and SG Lance Stephenson. Dubbed “Born Ready” as a high school basketball prodigy, Stephenson entered the NBA draft after a single season at the University of Cincinnati. The former Bearcat played sparingly as a 20-year-old rookie and struggled to find a consistent role until his third season in the league. The 6’5” 230 lb. Stephenson, who looks more like a tight end than a prototypical NBA two-guard, has grown up alongside George and Hibbert. After averaging just 8.8 points per game last season Stephenson has upped his average to 13.2. He also leads the Pacers in assists per game (5.0) and has registered two triple-doubles in the first few weeks of the season. Stephenson is joined in the backcourt by Hill, a late first round pick by San Antonio in 2008. Hill played behind All Star PG Tony Parker with the Spurs for a few seasons before being dealt for Kawhi Leonard during the 2011 draft. The 27-year-old Hill is shooting over 40 percent from three-point range this season for Indiana.

Even Pacers’ coach Frank Vogel comes from a rather pedestrian background by current league standards. After breaking into the league as a video coordinator with Rick Pitino’s Celtics, Vogel spent four seasons on the Indiana bench as an assistant coach. The 2011 firing of Jim O’Brien made Vogel the interim head coach in charge of a talented young squad. Rather than chase a big name retread for the permanent coaching job Indiana handed Vogel the reins. Vogel’s amassed an impressive .623 winning percentage in his two-plus seasons on the bench.

While the Knicks and Nets try desperately to recreate Miami’s “Big Three” magic, and the Lakers pine for a big name free-agent to pair with the aging Kobe Bryant, the Indiana Pacers have eschewed the checkbook and used solid drafting and player development coupled with shrewd trades and signings to build the least sexy contender this side of San Antonio.