The Matt Wieters Charade in Baltimore

Don’t believe rumors that the O’s will ditch their catcher. 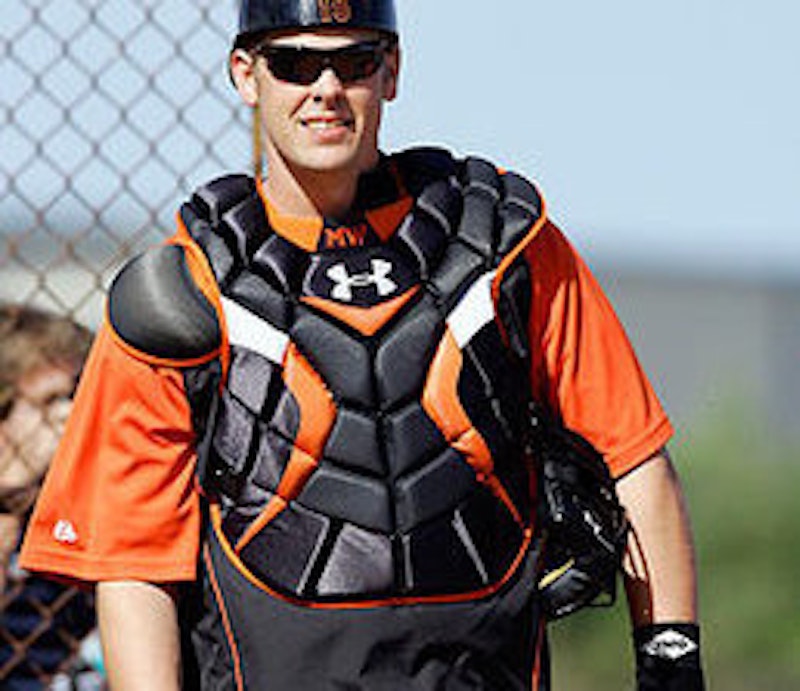 When Matt Wieters was making his rapid ascension through the Baltimore Orioles’ minor league system he was dubbed "Mauer with power," a nod to Twins' All Star catcher Joe Mauer and Wieters’ own long-ball potential. When Wieters arrived in Baltimore some enterprising fans created a Wieters’ facts website that made boastful claims about Wieters' general manliness and fictional feats of strength. O’s first baseman Aubrey Huff dubbed the young catcher "the switch-hitting Jesus" as fans and media flocked to get a glimpse of Baltimore’s next shining star. That was 2009.

Now, in the winter of 2013, Wieters’ future with the club is cloudy. Manny Machado has dethroned Wieters as Baltimore’s hardball savior. The Mauer and Johnny Bench comparisons have receded as Wieters has settled into his role as a dependable though not spectacular catcher. While Wieters has excelled on defense his offensive production has lagged. The two time All Star bottomed out offensively in 2013, posting career lows in batting average (.235), on base percentage (.287), and slugging percentage (.417). In Wieters’ defense, he did post a career low BABIP of .247, a number that is substantially under his career BABIP of .283, which suggests that he could see a significant rebound in 2014.

The talk in the early going of baseball’s hot stove season says the Orioles are reportedly shopping Wieters in an effort to bolster the starting rotation. The assumption is that the Orioles can’t add pitching without subtracting a large salary from the payroll. Wieters, two years from free agency and represented by Scott Boras, has been dangled as trade bait in this scenario. This is total crap.

The Orioles are shopping Wieters not because they’re cash-strapped and can’t add a much-needed starter but because they have no intention of meeting Wieters’ price tag when he becomes a free agent following the 2015 season. Baltimore has plenty of money to spend even without taking into account the additional $25 million each MLB franchise will receive as part of the expanded national TV deals. The Orioles could also dump closer Jim Johnson and his hefty salary to free up payroll. Baltimore has a solid core in place, of which Wieters is an important piece, and a chance to compete over the next two seasons. The Orioles need to add a dependable second baseman, a designated hitter, and a frontline starting pitcher to make a run at the defending champs from Boston.

Rather than fanning Wieters trade rumors Baltimore should be taking some of that MASN money they’ve been hoarding and make a run at Matt Garza or turn the AL East on its ear by bidding a Darvish-like posting fee for Japanese hurler Masahiro Tanaka. The Orioles should be trying to win before Wieters bolts rather than proactively dumping him. Instead the O’s are once again more concerned with expanding Peter Angelos’ healthy profits than competing for a World Series.

ESPN’s Buster Olney reported over the weekend that Boras and Wieters were seeking a contract in the neighborhood of the eight-year/$184 million contract the Twins gave to Mauer a few seasons ago. Wieters is no Mauer: hell, Joe Mauer isn’t even Joe Mauer anymore. The former All Star catcher will be playing first base for Minnesota going forward, putting a huge damper on his overall value. My guess is that Baltimore’s asking price for Wieters is just as unreasonable as Wieters’ asking price to Baltimore. The Orioles need an ace and no one is dealing an ace for a .230 hitting catcher who’s looking for huge money. Maybe the Orioles are dangling Wieters as a negotiating ploy. If so, Boras can see right through it. Wieters is more valuable to Baltimore than he is to any other team and the O’s have no internal option ready to replace him behind the plate. A rumor was floated last week that Baltimore would be interested in Jarrod Saltalamacchia in the event that Wieters was dealt. Baltimore would pay a premium for Saltalamacchia, who’s coming off a career year in which he posted an absurd BABIP of .372 and was benched during the World Series. They’d also be selling low on Wieters.

The Orioles finally have a solid team that could compete and the financial wherewithal to acquire several reinforcements. Instead of taking aggressive action to push the franchise forward Baltimore seems to be crying poor yet again. Small markets can win in MLB these days, but small minds never will.