On the night before a gun show, Marist Hockey was stirring. 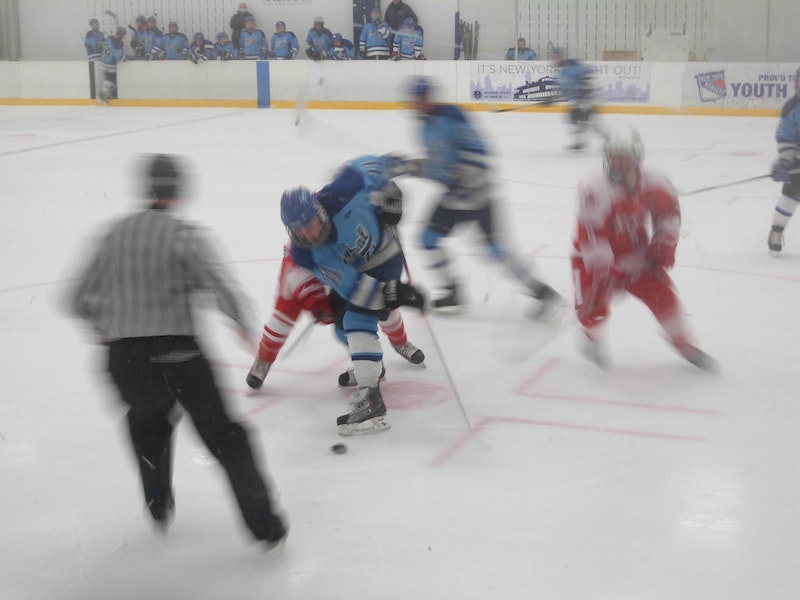 College hockey will always have the aroma of wet socks. This needs to be reaffirmed every once in awhile, so I was off to see Marist College vs. Central Connecticut State University on a Friday night in Poughkeepsie, NY. The game had to wait for the local rink “DJ skate” session to end, so three periods of Super East Collegiate Hockey League action would take fans well toward midnight.

Marist, known more for its powerhouse women’s basketball program, offers its hockey games for free. The Red Foxes play home games at the McCann Ice Arena, an architectural afterthought attached to the Mid-Hudson Civic Center and the Poughkeepsie Grand Hotel. Free admission to live hockey is a thing of beauty, yes, but along with the scraping of skates and the hustle of student-athletes slamming into the boards there is a sampling of H.G. Wells time travel.

The Civic Center block of Poughkeepsie is wedged permanently in the year 1975. Poughkeepsie bought into some horrible urban planning that called for giant pedestrian malls and one way multi-laned streets expediting car traffic in and (mostly) out of this rough and tumble Hudson Valley city. If you can find Vassar College, good for you.

The rest of Poughkeepsie is a discarded omelet of on-ramps, dead-ends halting at railroad tracks and askance views of the Hudson River. Bad lighting and abused public spaces tease courthouse workers and MTA lollygaggers alike. It is the drop ceiling covering Hudson Valley splendor to its north, a city of cheap pizza and horrible Chinese food. The giant megamall sited near the IBM work camp along an already strip-mall choked Route 9 is actually called “The Galleria.” This retail homage to Dallas of course rendered the mom-and-pop (mostly just mom) downtown merchants obsolete before the Bicentennial souvenirs could be stashed in the attic. But despite this accumulation of malaise, some nights in Poughkeepsie there is free college hockey.

Arriving at Marist hockey means entering a classic creepy parking garage with no attendant in the booth. Drainage pipes defy code. Flood-damaged Florida-plated cars gather soot in the corner. To the right is the McCann Ice Arena with the usual bank of locked doors and a shared lobby with the rectangular Civic Center space. Concerts there, especially metal like Judas Priest, suffer the torturous acoustics of the room. To the left, set at an odd angle from Market St., is the optimistically-titled Grand Hotel. Larry Hagman would’ve looked perfect in the crystallized entranceway. The nervous check-in staff puts away their usual fisheye when Marist hockey fans saunter in for between-period beverages at the bland Market St. Bar in the Muzak-filled lobby. The disinterested, effeminate bartender has a weak selection of bottled beers and the whole place has the itchy leisure suit feel that Poughkeepsie continues to master to this day. Without irony.

The recent Friday saw the bar peppered with gun dealers as the weekend event at the Civic Center was “Big Al’s Gun and Premier Knife Show.” A boozy pair–including one of the organizers not named Al—talked loudly about lack of gun show venues in Long Island, which they saw as a good market for firearms. They were sick of the travel and being away from their dogs and dealing with tenant complaints on their properties back home. When two German tourists sent from

Central Casting sat between the gun show guys and me, it was time to choke down the rest of my beer and get back to the game. I had to ask, though. “Are you here for the gun show?” The Germans said no, they did not know about the gun show. They ordered Bud Lights and I got the hell out of there.

Back on the ice the Red Foxes and Blue Devils were battling an evenly-matched tilt in front of about 73 onlookers. CCSU went up 2-0 and toward the end of the first, Marist unveiled a compact rally within a three-minute window to equalize. A great steal by senior Steve Milanesi on a failed clearance put him in place to whistle one past CCSU’s jittery goalie. A minute or two later, Milanesi assisted on the tying goal which was a pretty sweet deflection in front of the net. A minute after that, he was in the penalty box for hooking. He did everything except his calculus homework right there on the McCann ice.

This was certainly not Russia versus Canada in the World Championships. It wasn’t even the Butte pre-dawn beer league. It was just low-level college hockey played in the delivery entrance of the northeast, a region boasting NCAA programs that could crush half the AHL squads currently skating and maybe a few NHL outfits. But Marist vs. CCSU entertained because these kids are hungry and most of the games feature very open play with end-to-end action. It was a delight to see sophomore Marist defenseman Trevor Larkin cannonball his way through the slot with a burst of speed to make it 3-3 near the end of the second period. Larkin’s squib-explosive velocity turned his hulking teammate—the Marist captain and the biggest kid on the ice—into a Mary Shelley reanimation experiment looming on the blue line, amazed and astonished and probably very tired. Despite the Red Foxes’ tenacity, CCSU would dominate the third period and leave Poughkeepsie with a 5-3 win. It was a home-and-home series, so the next day the Red Foxes left behind Big Al and his gun and knife show, aiming their team bus toward the Newington Ice Arena in Newington, Conn., for a rematch with those pesky Blue Devils.