"With Thanksgiving approaching, I began thinking last week about the things in sports for which I am most thankful." 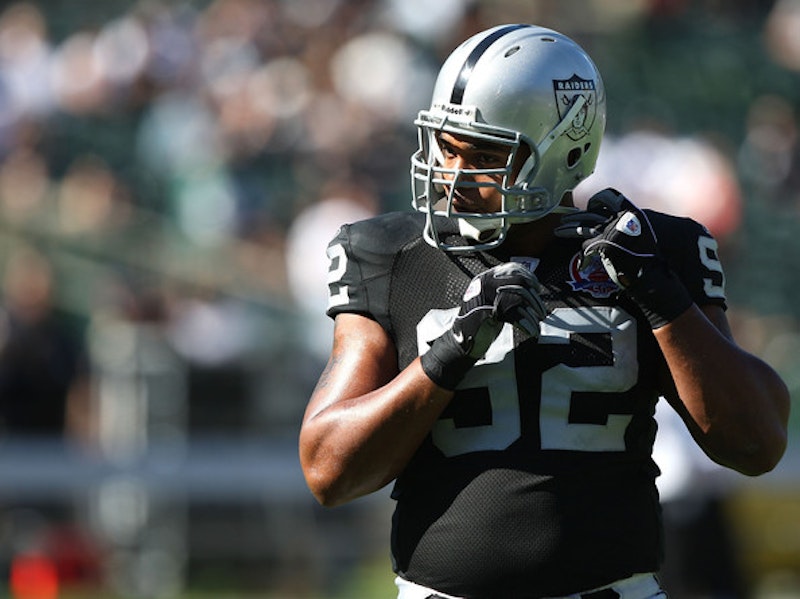 I began compiling my list, which you’ll see below, when out of nowhere on Sunday afternoon Raiders’ Defensive End Richard Seymour shot to the number one spot. If you haven’t already seen the video of Seymour smacking Steelers QB and serial creep Ben Roethlisberger in the face go ahead and Google it. The Steelers had just scored in the second quarter to take a commanding lead and were lining up for the extra point when Roethlisberger approaches Seymour from behind. Seymour quickly turns around and smacks Big Ben in the facemask with an open hand, dropping him to the turf. No one can be sure what Roethlisberger said to set off Seymour. Perhaps he merely mistook Seymour for a defenseless 20-year-old coed only to be jolted back to reality. Regardless, the smack offered a bit of poetic justice for a “man,” and I use that term very loosely, such as Roethlisberger who historically uses bodyguards and/or law enforcement to assist in the procurement of his play toys. I think I speak for fathers of daughters everywhere when I say, “Thank you, Richard Seymour.”

Gary Williams—I’m putting Williams on the list because his run of success at the University of Maryland should be marveled, and yet he’s the constant target of scrutiny. Perhaps he’s a victim of his own success in taking Maryland from a sanctioned program to a championship and all of the expectations that come with it. Williams’ teams always play hard, are well prepared, are free of off-court and recruiting scandals and admirably represent my birth state. Plus, you have to love a coach who sweats through $3000 suits and cusses like a drunken sailor.

Joe Flacco—I was going to put the Baltimore Ravens on this list but I think that’s too big picture. The NFL returned to Baltimore over 14 years ago and we’re well past the point of just being happy to be in the league. The 2000 Super Bowl team offered up some treasured lifelong memories, but that success was fleeting. Today’s NFL is predicated upon one thing: offense. We may never see another defense like the 2000 Ravens and with that comes the realization that without a big time quarterback you can’t win a Super Bowl. Flacco is that big time QB that Baltimore fans have waited for since the days of Bert Jones. Sure, Joe isn’t perfect, but he’s young, successful, and gets better every week.

York Revolution—My wife and I moved to York, PA about six years ago for the lower cost of living, rolling hills, dairy fresh ice cream and polite citizenry. The York Revolution of the Atlantic League opened shop about two years later and reduced the necessity for me to drive an hour to Camden Yards to watch the lackluster Orioles to get my baseball fix. No, the Revolution is not Major League quality (insert Orioles joke here), but they are about 10 minutes from my house, very entertaining, family friendly and have quickly become a source of civic pride. I can take my two kids to a Revs game for about $20, which includes tickets, parking and dinner. Plus you’re guaranteed to see some former Big Leaguers on just about every team’s roster. That’s a good deal in my book.

Wrigley Field—If you’ve never been to Wrigley Field, go book the trip. I made my first and only pilgrimage to Wrigley about eight years ago and am planning a return trip next summer. The Wrigleyville area is a bustling, dynamic baseball theme park the likes of which every stadium built in the last 30 years has tried unsuccessfully to duplicate. I love Camden Yards, and Fenway Park is pretty cool too, but there’s nothing like a day game at Wrigley. Heck, they even had a college football game at Wrigley over the weekend, complete with all the expected quirks associated with playing football in a 96-year-old baseball park. If they played the MLS final in Wrigley I may have even logged a few minutes watching soccer, though probably not.

NHL’s Winter Classic—I’m by no means a hockey fan. Other than wasting brain cells staying up until four a.m. playing Blades of Steel as a 12-year-old I don’t have much history with Canada’s game. I’ve been to one NHL game in my life, which featured a vastly overpriced ticket to watch the then moribund Caps. Now that I live in York my family typically makes a couple trips a year to Hershey to watch the AHL’s Bears. My four-year-old son likes the Zamboni and chocolate bars and I enjoy watching the athleticism of world-class athletes moving at breakneck speed on ice. It’s still not enough to get me to watch hockey on TV regularly, but I do tune in to one NHL game each year, the NHL’s Winter Classis on New Year’s Day.  The league picks two rivals each season to play a game outside in the elements. In years past the Winter Classic has been played at Fenway Park and Wrigley Field. This season’s match-up features the Penguins and Caps at Heinz Field in Pittsburgh. There’s something about the looming threat of snow that gets me amped up for a sporting event.

The NCAA Basketball Tournament—There is simply no sporting event better designed or as consistently appealing and dramatic as those three weeks in March.