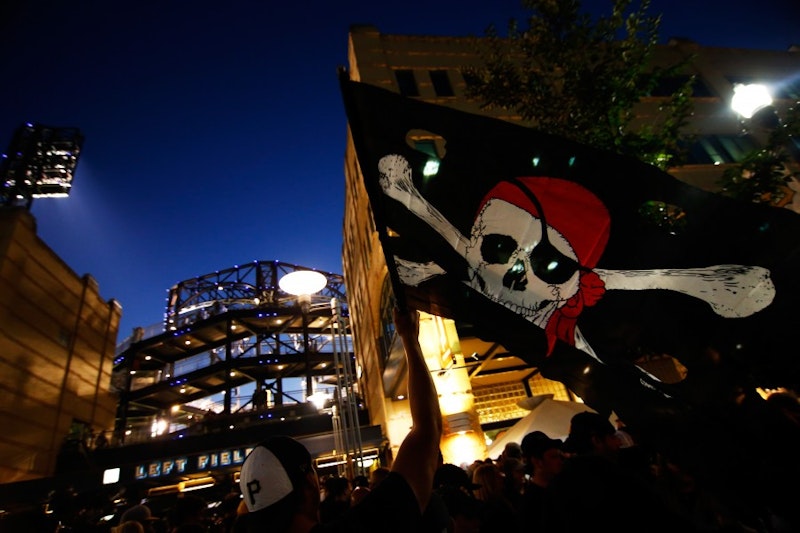 There is really no way for a fan to “prepare” for a one-game playoff to stay in the postseason. The chaos experienced last season by Pirates fans began anew when I listened to “Religion” by Public Image Limited on Spotify. John Lydon penned the nasty ditty back in 1978, and the final line rings in my head: "This is religion. Your religion."

He’s right. I look at my grandfather’s pocket watch on a Pirates shrine. It is permanently set to 3:36 pm which is the exact minute Bill Mazeroski hit the game-winning homer to beat the Yankees in the 1960 World Series. This is my religion, and I am not losing it.

On Wednesday night ESPN will show my Pittsburgh Pirates hosting the San Francisco Giants at PNC Park in a win-or-go home special, just like the contest the Bucs won in 2013 against the Cincinnati Reds. Faith, loyalty, spiritual drive, intuition and perseverance—all of these come into play during a nervous one-game clash that kind of defies the 162 game marathon of a baseball season. I got through it last season, barely. The hours leading up to the game against the Reds were frantic and featured epic shouting matches with good friends who had the nerve to ask about the nuances of the MLB two-team Wild Card format. Wednesday will be another fan “blackout” at PNC as the Bucco minions will don black garb and fill the stadium with beer-and-pierogi fueled energy that could create another Arthur C. Clarke ebony monolith looming over all diamond foes who dare enter the 412 area code.

Religion also plays a big part this week as a man known as John of God descends on my upstate New York town just about the time the Royals and A’s begin their AL Wild Card clash in Kansas City. He’s a Brazilian medium who is guided by the spirits of King Solomon, Ignatius Loyola and other famous doctors throughout history. I’ve never seen him in person, but from the photos I notice he has a certain Luis Sojo quality about him. His given name is Joao Teixeira de Faria. He’s 72 and speaks only Portugese and claims to be just a simple farmer from the mountains of Brazil who happens to know how to heal people. He makes very few appearances in the States, so his stop at the Omega Institute outside Rhinebeck always turns into a midweek frenzy of the desperate and ailing. I'll spend most of this week driving a taxi full of people pouring off the Amtrak trains and Trailways buses to see this man. They are told to wear all white and no underwear when appearing in front of John, and after his “psychic surgeries” he often commands them to immediately rest in bed. That means a 25-minute wait for a taxi and a 40-minute drive to their motel south of Poughkeepsie. Luckily the passenger seat reclines, so many of John of God’s customers are at least able to lie back while I guide the Crown Victoria through rush hour traffic in Hyde Park as a bed at the Holiday Inn Express on Route 9 awaits their miracle.

A few years ago I had repeat trips to see John of God from a West Coast family denouncing childhood vaccinations as they toted their autistic son back and forth. They told me the Nazis invented all of the vaccines currently given to American toddlers. Then it was Chrissy Amphlett, the singer from the Australian new wave act The Divinyls, spilling her meds in the back of the taxi as her assistant tried to keep her calm. She was fighting breast cancer and was seeking John’s help in kind of a last ditch effort. It was late summer of 2012, and she held on until April of 2013 when she died in New York City at the age of 53.

So many enter the taxi with so much hope, and leave with their own version of a one-game playoff. Thousands attempt to see John of God during his rare U.S. appearances, but relatively few get in unless they have the dough and the ways and means of getting to a pretty remote location in upstate New York. He did Atlanta a few years ago, but insiders say there were too many cops and the convention center atmosphere kind of killed the channeling and healing meditations and prayers.

The Pirates are facing a left-handed Southern Baptist on Wednesday night. His name is Madison Bumgarner and he is from Hickory, N.C., where the Buccos used to have a class A minor league squad called the Crawdads. Five current Pirates toiled there in the mid-2000s, including reigning NL MVP Andrew McCutchen, so we have already won over his home soil. Bumgarner is a devout Baptist who lived in a log house growing up. So he will be no match for his mound opponent Edinson Volquez, who has changed names, been busted and suspended by MLB for an illegal substance in his drug test and wears major bling on the mound.

If Billy Martin were still managing (or if Volquez ever faces a Buck Showalter-managed team) he will certainly be asked to remove his Oil Can Boyd-style gaudy gold rope dangling way down from his neck. I’m surprised no managers or opposing stickler type players have called attention to this accessory, especially during the recent hot run by Volquez on the mound. Anyone who can channel Oil Can Boyd is certainly going to prevail in a contest against a guy named Madison. I certainly don’t want to jinx it all as I decide where to watch the NL Wild Card tilt (if it wasn’t for John of God, I might be in Pittsburgh to see it live). The local bar might be good. It has a horse theme and contains a carriage once used by the 22nd Vice President of the United States, Mr. Levi Morton. He would have been president had he accepted James Garfield’s invitation to be his running mate, as Garfield was assassinated just 200 days into his term in 1881. Nine years later, Morton would become Vice President on the ticket with Benjamin Harrison, who is no relation to Pirates superstar Josh Harrison, though they are both native Ohioans, as am I.

I feel bad for the folks at Kool-Aid as they continuously suffer through the Jonestown metaphor often misemployed in the media when sports talk radio hosts and columnists accuse people of “drinking the Kool-Aid” (i.e. falling in faithfully with the company line). Actually, it was not Kool-Aid that was used at Jonestown for the mass suicides. It was Flavor Aid, which is an entirely different brand. When it comes to old time religion, or even new age chicanery—or for that matter the madness of the MLB Wild Card—we should always try to get it right. Accuracy counts, and as Pirates pitching coach Ray Searage has helped cure Volquez of his control problems, look for Edinson to hit his spots and take the Pirates to the Promised Land.