On to the ALDS. 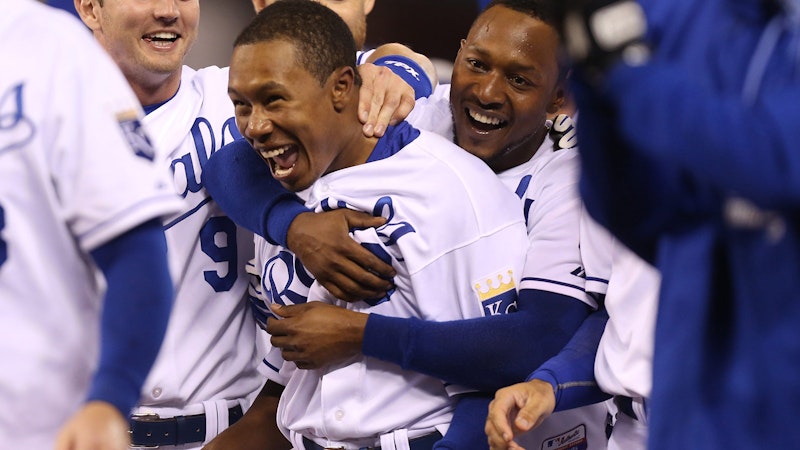 Terrance Gore: a name 99 out of 100 baseball fans probably never heard of before last night. Today, maybe that number drops to 90.

When your eyes set upon Terrance Gore, standing there on first base in the bottom of the 8th inning of the American League Wild-Card Game, you probably think one thing: “Man, he’s TINY!” Selected to run for the rather glacially-paced Billy Butler, who had just trimmed Oakland’s lead down to two runs (7-5), Gore came in with one purpose. Replace the man nicknamed “Country Breakfast,” and take second base. But let’s set the proverbial stage first.

The Kansas City Royals have been held out of baseball’s postseason festivities since 1985. To put that into my perspective, the Kansas City Royals haven’t played a truly meaningful baseball game since I entered Kindergarten. Which is why I want them to win at least a few games this October. Today, I have a few broken-hearted friends, those admirers of the Oakland Athletics. I have lots of love for former (and possibly future) Red Sox starter Jon Lester, who pitched relatively well for seven-plus innings last night, before handing the ball to manager Bob Melvin (who appeared anxious all evening). Lester walked steadily off the mound with a 7-4 lead.

Sinkerball specialist Luke Gregerson, who has a little Rollie Fingers imitation mustache twirl, relieved Lester and gave up a solid single to the aforementioned Billy Butler. Butler goes out. Terrance Gore hops out of the dugout and there he is, with a foot on first base and the other foot itching, like Willie Mays Hays in Major League, or like Dave Roberts in that fateful Game 4 comeback in the 2004 ALCS. The moment when the rabid fans in a collective stadium know a stolen base attempt is about to occur is simply awesome. It’s why we watch these games.

The pinch-runner is an after-thought. He is never discussed before a playoff series, or before a big game. He is just one of the several role players, who wait patiently (or biting their fingernails) on the bench for the moment when the spotlight shines on them. Roberts’ steal of second off Mariano Rivera will go down in MLB history and Boston sports history as one of the indelible moments of fandom that stay with baseball lovers for a lifetime.

Terrance Gore is 5’7” and weighs 165 pounds, according to baseball-reference.com. He is 23 years old. Before last night, he had stolen five major league bases in five attempts, all since his September 1 call-up. In his short minor league career, he has swiped 168 and been caught only 17 times. Terrance Gore has hit exactly 0 homeruns in his 1,245 minor league plate appearances. The miniscule center fielder is on the roster for one reason. He moves faster than everyone else. Like most of the Royals, who hit the fewest number of home runs in the regular season of any postseason team in decades, he has to do other things because the power isn’t there.

The Kansas City fans had quieted after the A’s struck for five runs in the top of the 6th. Down 7-3 with six outs remaining in their season, the Royals simply took off and their fans became delirious. First it was Alcides Escobar on the third pitch of Nori Aoki’s at-bat. Next, Lorenzo Cain, late in Eric Hosmer’s tough at-bat, in which he’d worked the count to 2-2. After Billy Butler’s line-drive single, it was Gore’s turn.

First pitch and he was gone. Dust rising behind him and no-doubt about the call as he slid feet first, popping up safely. Gregerson was rattled. The stadium rocked. A wild pitch later and the A’s lead was down to a single run. Gregerson came back to strike out the following two hitters, preserving the lead for another inning.

It wasn’t until the 9th that the Royals tied it, a lead-off single by Josh Willingham the only hit they needed. Sacrifice. The legs of Jarrod Dyson allowing them to take third base with one out. Another sacrifice fly. The whole team sacrifices. Let’s be honest. This team has to play this way. It’s the only shot they have. In the top of the 12th, after many east coast fans had likely turned off the television, the A’s plated one more run. Using their speed once more, the Royals triumphed in the bottom of the 12th, with Hosmer’s triple, an infield chopper that third baseman Josh Donaldson had no chance on, and another stolen base, before Salvador Perez’ game-ending single down the left-field line.

It was not to be for Billy Beane’s team. Another brutal loss for the A’s and their fans to absorb. Another year that was not to be. All the mojo that they’d strung together and the waves of praise that crested in mid-summer, before the trades, all that gone now as the calendar flips to October.

However, I’ll be happy watching Terrance Gore and Jarrod Dyson. I’ll be hoping for more of this Royals run, a shot at redemption after decades of misery. The Angels used to play small ball, too. Chone Figgins played the role of stolen base specialist. But now they have all the power. Home-run mashers in Trout, Pujols and Hamilton. A dinged-up rotation that will hope to get through the 5th inning.

The series starts Thursday. In Sunday, there will be another baseball game in Kansas City. Those crazy Midwesterners, who live in the shadow of Cardinals country, they deserve it. Run, Terrance, Run.