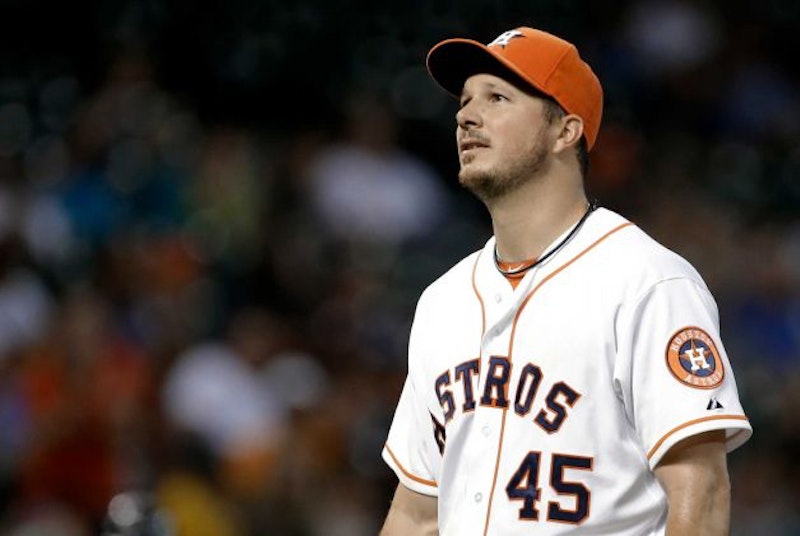 The Baltimore Orioles clearly stated their intention to stay in the thick of the American League playoff hunt with Tuesday’s trade for reliever Francisco Rodriguez. The trade for K-Rod served dual purposes for Baltimore as it simultaneously bolstered the bullpen while keeping the best available reliever from going to the Red Sox or Tigers. The ongoing struggles of Jason Hammel and inability to find a right-handed designated hitter could mean more trades are in the Orioles’ immediate future.

In his Wednesday column Fox’s Ken Rosenthal suggested that the Orioles could be interested in Astros’ hurlers Bud Norris, Lucas Harrell, and Erik Bedard. Norris would be an upgrade over Hammel, with the bonus that he’d be under Baltimore’s control for an additional two season. Harrell, already 28, leads the AL in walks and may be a downgrade from Hammel. The suggestion of a Bedard return to Baltimore is laughable. The pitching equivalent of the cowardly lion, Bedard frustrated and annoyed Orioles fans for years as he continuously begged out of starts upon completing six innings or tossing 90 pitches. The Red Sox learned all about Bedard when they acquired him to fill out a depleted starting rotation late in 2011 only to see him end up on the disabled list. Bedard signed with Pittsburgh in 2012 but was cut by the surprise contender after posting a 5.01 ERA in 24 starts. Bedard most recently removed himself from a no-hitter after tossing 6 1/3 innings. Quite simply, when the going gets tough Erik Bedard takes a shower.

Given the remarkable chemistry of Buck Showalter’s Orioles the addition of Bedard would be questionable at best. Bedard isn’t particularly effective these days and probably isn’t enough of an upgrade over Hammel to be worth the headache or the fan backlash. The Orioles should be content to let Bedard’s lasting legacy be the trade that brought All Stars Adam Jones and Chris Tillman to Baltimore.

The trade for Rodriguez sent one of the Orioles’ best tradable assets (Nick Delmonico) to Milwaukee. The trade of Delmonico demonstrated how far this organization has come in just a few years. It wasn’t so long ago that a mid-level prospect like Delmonico would have been deemed “untouchable” and held up to fans and local media as a bright hope for the future. The concept of “win now” has crept back into the local lexicon as the 2013 pennant chase has taken precedence over 2016. Delmonico has flashed power potential but, as a corner infielder for an organization that has Chris Davis and Manny Machado at the big league corners, he was expendable.

The Orioles would no doubt like to add another starting pitcher but with Matt Garza off the market, and Delmonico removed as a trade chip, it could be difficult for Dan Duquette to swing a trade for an impact arm. The Orioles got an up-close view of Kansas City’s Ervin Santana on Wednesday night. The big right-hander would look good in orange and black but the Royals’ asking price could be too steep. If the Orioles can’t swing a trade for Santana or Norris they may be better off sticking with Hammel or giving young lefty Zach Britton another shot.

The designated hitter position has been troublesome for the O’s throughout 2013. The recurring injury woes of Nolan Reimold have given Danny Valencia and Cuban import Henry Urrutia a chance for fill the spot. Valencia is hitting just .200 in 70 at bats. Urrutia was a line drive machine in the minors and has looked good in his limited big league duty. If the Orioles can’t pull off a trade for a hitter like Kendry Morales they may be best served by giving Triple-A outfielder L J Hoes an opportunity. Hoes has posted a .405 on base percentage in 97 games for Norfolk, including a staggering .460 OBP in 77 at bats against lefties.