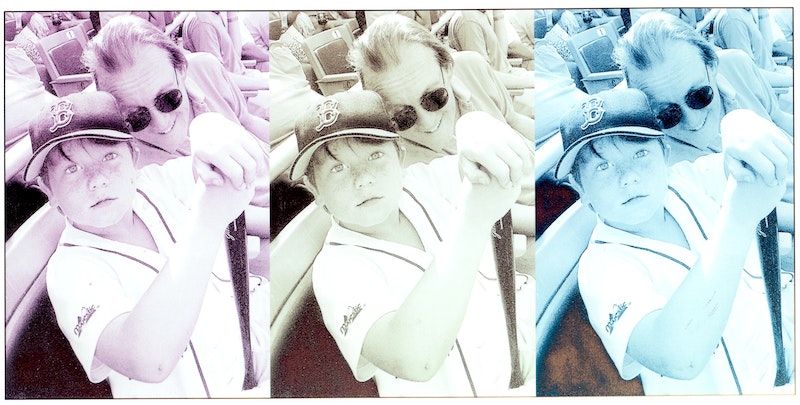 It’s not often I fall for April Fools’ jokes—I’m indifferent to the humdrum tradition—but on Easter Sunday I was flummoxed twice. Early that morning my friend Tom Joyce posted a meme on Twitter that showed the purported pastel uniforms MLB players would wear that day to celebrate the holiday. For a minute, I thought, well, that makes sense: MLB, in its quest for attention and viewers, is never short of gimmicks. Jackie Robinson Day (legit, though I’ll note once again that labor leader Marvin Miller was just as important as Robinson in the game’s history, helping players become millionaires instead of indentured servants); pink and blue ribbons, bats and such for Mother’s and Father’s Day in service of cancer charities; throwback uniform days, which have mercifully receded in popularity; and Independence Day stars & stripes.

(The above photo, snapped by Don McLeod in 2002 at Shea Stadium, shows my then nine-year-old son Nicky and me in the stands.)

In that context, Easter made sense in a wacky way. But I quickly realized the joke, and then thought, hmm, it’d be pretty cool if all players had an oversized image of Jesus Christ Rising From the Dead on their jerseys. Now, that would cause a very pleasing stir.

Later that night, my onetime Tribeca neighbor and Sox partisan Rick texted, at 11:45, that Boston’s closer Craig Kimbrel was off to see Mr. Tommy John Surgery James Andrews in Alabama on Monday because he felt a “pop in his elbow.” I was tired, but this ominous missive snapped me to attention: I scoured Twitter, beat writers at The Boston Herald and Boston Globe, as well as Major League Trade Rumors and came up empty. I even texted my son Booker in Manhattan with what could be a devastating blow to Boston’s chances, slim to begin with, of defeating the outrageously fortified New York Yankees for the A.L. East title. After this scutwork, finding zip, I went to bed reasonably assured that Kimbrel was okay—and since he’s in a walk year, I suspect he’ll be even more reliable than in 2017—and that ineffectively wild Joe Kelly would not be elevated to ninth-inning duties.

All this after Boston took three of four from the decimated Tampa Bay Rays, behind dominant starting pitching—a sweep of the season’s opening series was nixed on Thursday after the Sox bullpen imploded, thanks to Kelly and Carson Smith, wasting a stellar performance by Chris Sale. It’s really too early for nail-biting, but I couldn’t help it, since Boston’s dormant offense won the three games by scores of 1-0, 3-2 and 2-1, before exploding (sarcasm!) against the Miami Marlins on Monday night by a 7-3 score.

That just over 11,000 fans attended that game in Miami was testament to the new skinflint owners of the Marlins (I was familiar with just three or four of their players), even as the broadcast panned repeatedly to the Face of the Franchise, Derek Jeter, as if his mug wasn’t already burned in my brain from that horrendous Yankees dynasty at the end of the last century. On Tuesday night, the Sox again prevailed, 4-2 in 13 innings, lifting their record at this writing to 5-1. That the Sox have scored just 21 runs in those six games isn’t ideal—and new manager Alex Cora’s prescription of resting a regular or two every game, even with a scheduled day off upcoming, will take getting used to; on Tuesday night new acquisition J.D. Martinez butchered a ball in right field, playing in place of premier defender Mookie Betts, and that led to a run—but one supposes the bats will get going.

I live in Baltimore, but don’t at all care for the Orioles—manager Buck Showalter’s cringes and grunts can make anyone grimace—since they’re nasty Red Sox rivals. Still, I had to side with the O’s in their understandable chagrin at the Minnesota Twins’ carping—who had a 7-0 lead!—about Baltimore rookie Chance Sisco bunting on Sunday against an inexplicable defensive shift in the bottom of ninth inning and reached first for a legit base hit.

The Twins, any number of them, complained that Sisco violated those murky “unwritten rules” in baseball, and that veteran teammates like Adam Jones and Chris Davis would set him straight. I was glad that the O’s lost—though not as happy as Yankees relievers Dellin Betances and David Robertson blowing games on successive days to the Blue Jays—but Jesus Christ (whose image, unfortunately, wasn’t on uniforms for Easter), the Twins took two of three from the O’s, in convincing fashion, so what’s their beef?

Not like a no-hitter was on the line, and even in that case, I still don’t think opposing clubs should lay down. After all, there’s a written rule that players can’t ingest or inject PEDs (which I also think is dumb; if a player wants that edge, at the cost of possible future health difficulties, that’s his choice to make), but for MLB’s bigwigs, as always several steps behind the pharmacists, that doesn’t appear as high on the list of infractions as bunting against the shift or sliding hard into second base. Oh wait… that last one was done away with by the “Utley Rule.” So clean, but hard, slides trying to break up double plays are verboten. As a replay will, and often does, show.