We’re In An Era of Media Saturation

Star athletes have reached a level of celebrity that gives them a platform and an easy audience. 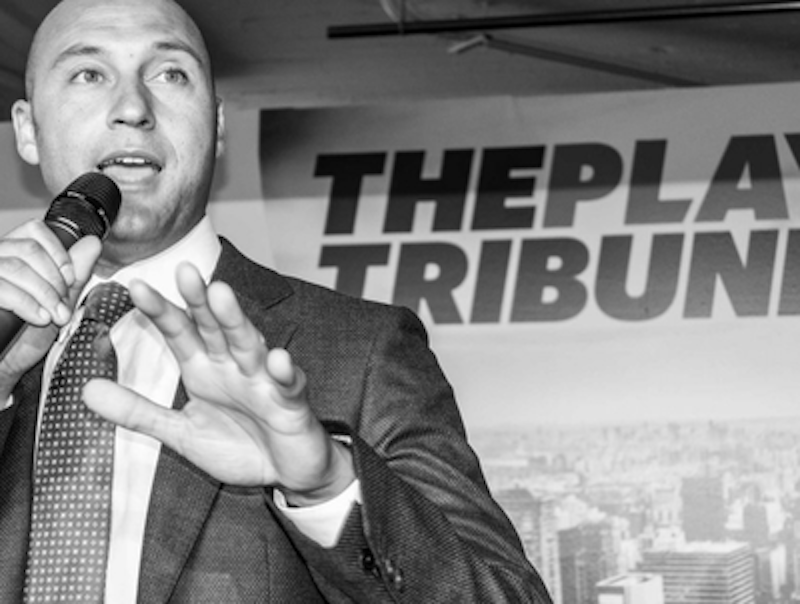 In a February New York Times essay headlined, “What Happens When Athletes Do the Sportswriting,” Amos Barshad writes about The Players’ Tribune. The website is a new type of outlet. Derek Jeter teamed up with sports marketing executive Jaymee Messler in 2014, launching the site with the idea of giving athletes an outlet for first-person narrative essays. Due to Jeter’s following and the sports-marketing expertise of Messler, one might’ve guessed the site would survive the initial phase. In the last three and a half years, it has become the go-to site for free-agent athletes to formally announce their free-agent decisions.

While old school fans may cringe at the idea of the free-agency-wooing process, unrestricted free-agency remains the biggest decision of a professional sports career, often involving leaving a city where an athlete matured. Sometimes an athlete leaves for a bigger market and more exposure, other times in order to chase a title, and in some cases, in order to return home. A cynic might say these essays, often heavily edited/co-written, are simply opportunities for athletes to spin the story to soften the blow to the departed city’s fans. An idealist might say these essays are an opportunity for athletes to take honest control of their voice. Either way, as professional sports (players, front offices, and the fan experience) have increasingly become financially motivated over the last three decades, the site is a marketer’s dream.

We’re in an era of media saturation, where attention seems to be the primary currency of our late-capitalistic age. Headlines are more critical than ever. People want to read what celebrities have to say. Star athletes have reached a level of celebrity that gives them a platform and an easy audience. Twitter and Instagram deliver messages directly. The impact on “journalism” has been dubious. Reporting often takes a backseat to immediate breaking news (completely accurate or speculative). Still, people are reading and listening to podcasts more than ever. All of this generally means that for stories to get read, they need to be more sensational, outrageous, or news-breaking. The Players' Tribune offers the news-breaking angle for athletes.

I love certain pieces I’ve read on the site. One of the highlights was Isaiah Thomas’ “This is For Boston.” The essay ran in September, weeks after the Boston Celtics and Cleveland Cavs front offices shocked the NBA with a Kyrie Irving-centered deal, in which the Cavs traded him Boston for Isaiah Thomas, Jae Crowder, and a Celtics-via-Brooklyn-Nets 2018 lottery pick.

Thomas’ run in Boston was remarkable. The emotional rollercoaster of the playoff run, the tragedy of his sister’s death, the tooth and hip injuries... all culminated in a wonderful Game 7 win in over the Washington Wizards in a brutal Eastern Conference Semifinal series. Then the hip injury made it impossible for Thomas to continue. Then the season ends. After it all settled, the shock of the trade felt like a visceral gut-punch. Many of my fellow Celtics fans felt somewhat torn about the deal, though the attraction of gaining Kyrie Irving seemed to quiet the frustration with losing Thomas.

We’ve entered a sports era where most of us rationalize any deal no matter how cold it leaves us. The emphasis on salary cap gymnastics and contracts, and the quantifiable metrics have replaced any feelings of individual loyalty to players. While we can say, “There’s no loyalty in sports,” that doesn’t mesh with how we actually watch the games and the passion that playoff hoops stirs up in us. The analytical brain versus the passionate heart of the sports fan. How do we balance both?

We rationalize the trades too easily. When players are talked about it terms of calculating financial terminology, it’s easier to consider the ramifications of losing a player you’ve loved to watch. In this framework, people are stocks, to be overvalued, undervalued, or properly valued. NBA talking heads and writers often have no hesitation in describing players as “assets,” and “pieces.”

The obsession with trades and roster management is dehumanizing. None of this is new to the NBA discussion, but it’s widely accepted, which is the problem I have. We can appreciate the philosophy of “The Process,” in Philadelphia while acknowledging how frail our bodies are and how difficult it is for a 7-footer like Joel Embiid to stay healthy in such an athletically-demanding 82-game NBA season. Ironically, I originally wrote this mere days before Embiid was inadvertently tackled by teammate Markelle Fultz, fracturing an orbital bone near his eye, possibly torpedoing the Sixers’ playoff hopes.

We don’t follow the NBA in the same way, but when the actual humans who we cheer for get injured, everyone with a conscience takes a moment to realize that something horrible happened to an actual person. Two weeks later, we read about injury updates and obsess about the player’s return.

From November 2016-May 2017, Isaiah Thomas suddenly rose from pure scorer to dominant fourth-quarter scorer, and leader of a 53-win Celtics team. Despite his 5’8” stature (he’s not 5’9”), Thomas’ star had unexpectedly risen, propelling him from the last pick in the 2011 NBA Draft to scoring guru and cult hero. After that, he dealt with the personal tragedy of his sister’s death on the eve of his first playoff game. At that point, hoops fans were forced to reckon with the fact that he was heroic and human. Cameras showed him grieving hours before tip-off against Chicago, supported by then teammate Avery Bradley. Not only did Thomas play, but he provided his usual offensive spark. The top-seeded Celtics struggled at times against the 8th-seeded Bulls as former Celtics point guard Rajon Rondo rekindled his all-around game and it wasn’t until an injury kept Rondo out that the Celtics regained their swagger.

As Boston advanced to the second round to face Washington, the drama somehow escalated. Thomas was elbowed in the mouth and lost a tooth early in Game 1. Incredibly, he grabbed the tooth during game-action, and kept on playing. Nothing seemed to stop the player whom Celtics legendary announcer Tommy Heinsohn dubbed, “The Little Guy!” But a hip injury suffered later in the Wizards series slowed the dynamo to normal-human speed. Despite the hip, Thomas put on a memorable display in front of the Garden crowd in a Game 7 win (29 points, 12 assists), pushing the Celtics on to face Cleveland in the East Finals. After attempting to play through the decreased mobility and pain of the hip injury, Thomas was forced to shut it down mid-way through Game 2. The series was not competitive, but the future seemed impossibly bright.

Cue the stark reality of salary cap sheets and roster construction. Cue the dimly-lit front offices of the Garden while the NBA Finals concluded in Oakland. Cue the seemingly strange trade request of Kyrie Irving… the first NBA player to declare he wanted freedom from LeBron James (and James’ shadow) in order to create his own legacy. Back to the question of agency. Kyrie bet on himself. And the new Cavs GM Koby Altman decided it made sense for Cleveland to prepare for life after LeBron and grab a high lottery pick from Boston (via Brooklyn). Isaiah and his possibly damaged hip were suddenly headed to Boston’s nemesis.

In summary, Thomas’ improbable rise was followed by his improbable departure. This was a whirlwind for Celtics fans. Those that obsess about the future or refused to get caught up in the heroics, understood Thomas as a salary cap number waiting to be paid what he obviously hoped was a max contract. Add in the hip injury that caused serious concern, and the size (defensive liability) and it’s no longer such a shock. He’s a risk. Then he’s gone. But the analytical sides of our brain shouldn’t always win. In the biggest moments, we cheer with something other than our brains, we cheer with our hearts.

Then, in early September, in a first-person essay for a website called The Players’ Tribune, Thomas filled in the gaps: How he wanted to hang up on the Celtics general manager, Danny Ainge; how he broke the news to his two young sons; how, after some time, he forced himself to accept that his Boston ascendancy was done. Sports fans had long ago ceased to expect access to the intimate concerns of superstar players: They were too famous, too rich, too big. But here was access not just to the life of a star but also to the star’s internal monologue. The Celtics front office had revealed that they saw Thomas as a mere asset — fungible, mobile, dispensable — and he responded by demonstrating his singularity. “When I say this hurts, man, just know that it isn’t because of anything anyone else did,” Thomas wrote. “It’s only because of something I did. I fell in love with Boston.” Reading it, I damn near cried.

This is what makes The Players' Tribune necessary. Through the site, he can air his thoughts in an eloquent, thoughtful way, with some editing as needed. Twenty years ago, reporters would’ve been salivating in front of Thomas’ locker when Cleveland arrived in the Garden. They would’ve urged Thomas to provide a negative sound bite, lashing out at Danny Ainge for making the decision. Or maybe 20 years ago, people wouldn’t have cared so much about what Thomas had to say about being traded... except he had become a legitimate cult hero in Boston over last year’s season the resurrection of a contending Celtics team.

In a well-known Letterman interview, Jerry Seinfeld described the hypocrisy of fans turning on players after they’re traded, concluding with his famous line, “We root for laundry.” In the interview, he’s describing being a New York Giants (NFL) fan. It’s also from the 1994, long before society really began to accept that athletes were more than just athletes and had a right to speak freely, or somewhat freely, on non-sports-related topics. It also describes football fans more than NBA or MLB fans. Football rosters are enormous, injuries are more widespread, careers are shorter, and there are only 16 games in a season. With the exception of quarterbacks, football players are certainly seen as part of a collective by most fans, rather than individuals. The tribal aspect of football, military/warriors only adds to the collective sentiment. The Us vs. Them aspect of our innate tribal human psychology has been ratcheted up by social media in our era of outrage while a decline of empathy is palpable. We can still make the choice to root for the people whose names are on the back of the jersey, as well as the team on the front. Reading athletes through their own words (with some polishing up) helps us root for those people as people.