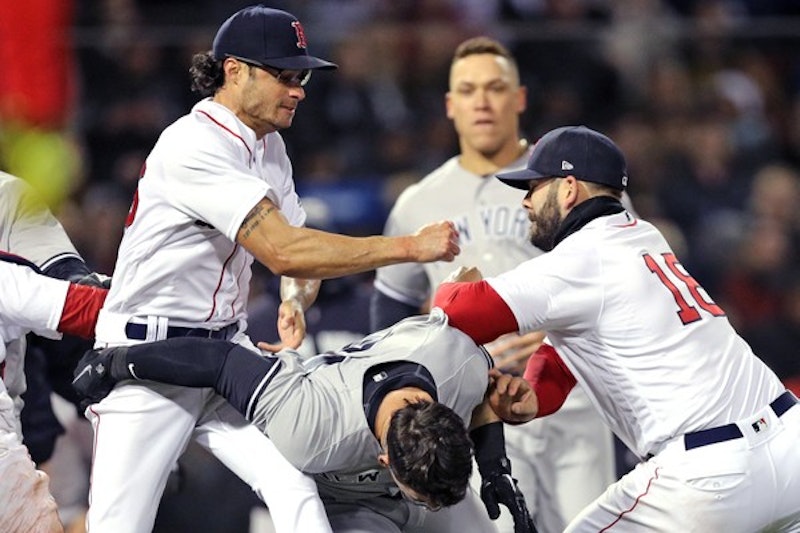 A couple of Yankees-Red Sox bench clearings on the same night as a dust-up out west between the Padres and Rockies got the blood going again for the former national pastime. All of the colluded-against unsigned free agents must be itching to get out there when they see a Brock Holt (with his Dutch Boy haircut under his winter gear head cover) glare down a Yankees rookie whom he thought slid too hard with spikes up.

Of course, if MLB hadn’t forced the umpires to scrap the “neighborhood play” at second base, none of this would have happened. Photos of the bespectacled Joe Kelly throwing his right fist at angered DH Tyler Austin later in the same game show the skinny pitcher has his wedding date tattooed in Roman numerals on his lower bicep. That’s only somewhat creepy. Yes, there’s a lot of good in the game right now, and that’s not just because my team—the Pirates—is in first place in the National League Central.

The Yankees are making their fans squirm already. Just when Giancarlo Cruz-Michael Stanton suffers his second “platinum sombrero” game in an excruciating Sunday loss to the Orioles, the clueless fans of course boo, perhaps unaware they have baseball’s version of an ICBM in their batting order among other inflators of a weapons-grade gonfalon bubble. The Steinbrenner tight-asses have gone the unlikely route of loosening the house rules in the Bronx as Yankee Stadium finally is allowing fans inside early enough to watch batting practice. The “Judge” box in right field is also another humanizing element to the alleged Dark Side that is Yankees Inc.

The lack of depth in the Bombers roster couldn’t have been more pronounced when bad-tempered beanpole Chris Sale led his Bogaerts-less Red Sox against the Yankees for a 14-1 humiliation at Fenway. It was a good set-up scenario for the next night’s donnybrooks, with the ghosts of Bill Lee, Lou Piniella, Carlton Fisk and Jason Varitek swirling around Yawkey Way.

For the bragging fest that is the current version of the New York Mets, well, never mind that they can beat up on the Phillies and Marlins. The real story it is “praise the Lord and pass the Heisman Trophy” as college football star and religious fanatic Tim Tebow led off his season with the Mets’ AA team in Binghamton with a home run. He had twice before turned fastball water into home run wine—once for the Columbia A-ball squad and another with the low-A hopefuls known as the Port St. Lucie Mets. It is the “miracle man’s” version of Genesis 1:1.

Tebow, the former NCAA football star at Florida and Denver Bronco playoff game winner, also hit a three-run homer in the Binghamton Rumble Ponies home opener against Portland. Since then, he has been striking out more than Giancarlo Stanton. I feel a calling in a baseball Jim Jones type of way and will seek out Tebow soon in the jungles of the Southern Tier of New York State. Stay tuned to this space for further reportage when the weather improves.

The Pittsburgh Pirates have overachieved against some smelly teams, while lost superstar Andrew McCutchen has sputtered in San Francisco except for his six-hit, walk-off homer performance against the Dodgers and another walk-off single. New Pirates Colin Moran (Gerrit Cole trade) and Corey Dickerson (Daniel Hudson trade) have quietly gone about their business: raking base hits all over the park. And Gregory Polanco has grown into his swing, off to a hot and somewhat healthy start piling up the RBIs and towering home runs.

It was also a delight to see the Bucs go into the permanent renovation/Yuppification project once known as Wrigley Field to take two of three games and then get the hell out to go down to Derek Jeter’s personal hellhole in Miami. Pittsburgh manager Clint Hurdle was wise to point out the immaturity of Cubs catcher Willson Contreras and hot dog infielder Javier Baez. They are unwatchable showboats and remind me of the me-first antics of former Mets shortstop Rey Ordonez.

Many might not have noticed the Oakland A’s have returned to using a mechanized “Harvey the Rabbit” robot to deliver baseballs to home plate umpires. It is a high tech, mobilized version of the scary rabbit that would emerge from a panel in the turf next to the home plate circle back when Charlie O. Finley was the zany owner of the A’s. I’m somewhat surprised a tech-company hasn’t stepped in with sponsorship of this “ground-based drone” delivery system.

And if you’ve watched any televised games, MLB’s new Six Mound Visit Limitation rule has given announcers countless minutes of mockery, sniping and caustic irony. The veteran geezers also like to call out the new managers in Philly, Boston and New York that are true rookie skippers with no previous managerial experience on their resumes. It makes me miss Art Howe—the ultimate scapegoat and Moneyball victim.

College baseball has heated up in the D-3 Liberty League, my favorite cold weekend activity of late. The unlikely Vassar Brewers sit atop the standings while the more unlikely Bard College Raptors are at 4-4 in league action. Bard swept R.I.T. in a Sunday doubleheader with a walk-off hit by pitch in Game One and a walk-off two-run single in Game Two. The defending champion Tigers (22-1 last season) were preseason favorites to win the league, so losing three of four games in Annandale was definitely not part of that blueprint. Vassar tortured Skidmore taking three out of four from the Thoroughbreds and they all sit well above the apparently overrated Rochester Institute of Technology guys in the standings. A study of the Skidmore roster shows not one player from the south or California. They’ve got a ton of New Englanders and Jersey guys. Vassar, meanwhile, has a Hawaiian catcher, a Pilipino pitcher and dudes from Texas, Miami and of course Southern California.

As I turn 54 this week, I find the simplicity of low-level college ball and the high-stakes MLB stuff to be a good combination to soothe the soul. For some reason I’m compelled to write about it and share the information with even the most befuddled and uncaring readers who may not get the jokes or references until months later, or perhaps never. This is my calling now as Uber attacks my taxi gig, just as Craig’s List attacked the newspaper gigs. It is, as Devo wrote, a “strange pursuit.” I’m here to stay, however, and I recently heard about a high school kid in Beacon, NY, named Torres who is attracting MLB scouts and has committed to St. Johns. Would love to drive down and see him, but most of the high school action is midweek, which rules me and my day job out of that scenario.