Andrew Triggs Stands On the Mound

In Front of 7000 fans in Oakland on a chilly Monday in April. 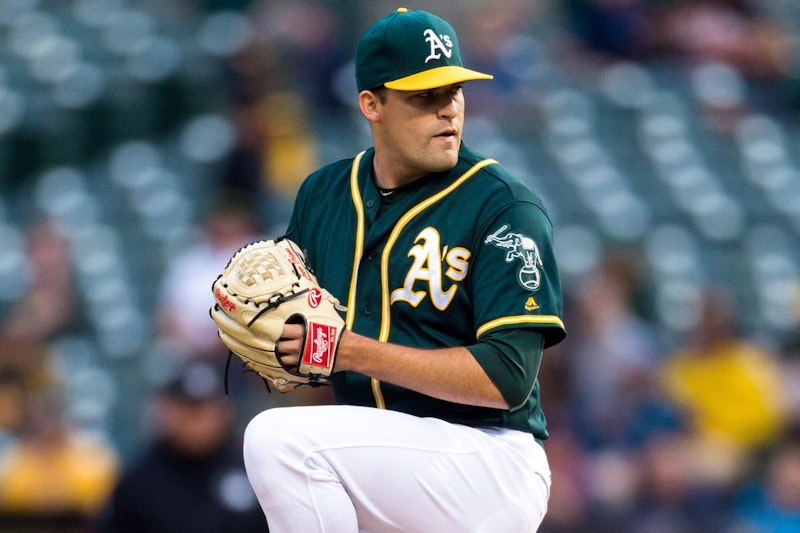 Andrew Triggs is a tall man from Nashville. According to Baseball-Reference, his nickname is "Triggonometry." A wonderfully dorky moniker befitting his craftiness on the mound. He made his major league debut at age 27, in middle relief. He’s now 29.

In most fantasy drafts, Triggs was completely ignored... that could imply he’s nobody's fantasy. Because I live near Oakland, and am mildly obsessed with pitchers, I know his name. His uniform number is 60, a high number and a strange one for a starting pitcher. He doesn't throw very hard, topping out at 92, though he gets some heavy sink on his fastball, which limits most of the hits he allows to singles and doubles. In addition to the two types of fastballs, Triggs offers sliders, curves and change-ups from a three-quarters arm slot that helps him deceive hitters.

Fifth starters in a pitching rotation are never secure. Fifth starters who’re over 27 are often temporary place-holders, soon replaced by hard-throwing young prospects. They live tenuous baseball lives. They don't usually get the big games. They get "skipped" on occasion, especially early in the season, when baseball still feels fresh, the grass slightly greener, and the sweltering August afternoons are a long way off. Skipped because they aren't exactly trusted. Like temporary employees in an office, fifth starters are relatively anonymous. Triggs makes the major league minimum for players with his experience level. It’s for these reasons that I enjoy the successes of fifth starters.

In game number five for the A's and Rangers, Triggs matched up with the ageless Bartolo Colon. For the last three years, Colon has managed to stay in the major leagues simply by throwing the ball near the edges of the plate. Doesn't matter how slow or how straight, desperate teams keep giving him the ball. As my friend Mike said, perhaps he has access to some scientific discovery that none of us know about. Or he has some serious blackmail on certain GMs in Atlanta and Texas. In any event, Colon's 6.48 ERA and .318 batting average allowed didn't keep the Rangers from offering him a minor league deal.

The low-budget A's gave Triggs a chance at the beginning of 2017 and his sinker was indeed heavy. He limited opponents to zero earned runs in four of his first five starts. In mid-May, (eight starts) he was among the AL’s ERA leaders with a 2.12. Then he ran into the Red Sox and Yankees and two starts after that, a hip injury ended his season. Such is life as a fifth starter.

On this Monday night in Oakland, Triggs is back in the rotation because two of Oakland's younger, more dynamic starters, are injured, both likely for the season. Jharel Cotton's elbow caught on fire in March. Top prospect A.J. Puk, whom many are eager to see in Oakland, felt his elbow crumble around the same time. Tommy John's name is always a whisper away for modern pitchers. Here comes inning number one of this 29-year-old's season.

From my television, there are more empty seats than full. I look it up: 7416 showed up. That's about one-fifth of the stadium's capacity. The NCAA title game combined with a chilly Monday night and a stadium that doesn't entice many... the end result is a smattering of humans in the stands. For the 19 teams that have even played a home game less than one week into the season, Oakland is now 18th. Only the Marlins, who have cleaned out their roster and are best considered an AAA team this year, have sold fewer tickets.

The Rangers already lost their speedy leadoff man Delino DeShields (Jr.) to a hand injury, so the first pitch Triggs delivers is to Shin-Soo Choo. A whopping 89 miles per hour and right down the middle, with same expected sink. Choo takes lots of walks, but has lost some of his power over the last couple of years. Another two-seamer for a strike, perfectly placed on the inside corner, at the bottom of the zone. Triggs misses twice with the curve, just outside. On a 2-2 count, Choo lines a single up the middle.

Number two hitter Joey Gallo, all home runs and strikeouts, drives a 2-2 fastball deep to left-center but it's caught on the track. Sigh of relief for Mr. Triggs.

Elvis Andrus is up third. Used to be all speed and no power, but with the fly ball-craze and age, the Venezuelan shortstop smacked 44 doubles and 20 homers last year. Andrus chases a curve off the plate for strike one, then takes the next three pitches. Another 2-2 count. Andrus takes the heavy sinker the other way, lining a single to right.

Three batters, three hard hit balls. Then Triggs saves the day. Adrian Beltre's best days are behind him. Triggs mows him down on three pitches, finishing him with a curve down and away. Promising outfielder Nomar Mazara works the count full, but just misses a sharp curve down and in. The location of Triggs' curveball was precise. No runs, two hits, two left on. Another inning in the Triggonometry book.

Colon will manage to limit the A's to a single run over six innings, giving up only a Matt Chapman solo shot in the 3rd.

Triggs will have a chance for a win as he steps to the mound in the top of the 5th with a 1-0 lead, but it won't happen for him tonight. A questionable strike zone (two of the balls appeared to catch the corner) will lead to a Drew Robinson walk. Robinson will steal second and come home on a Gallo single. Triggs will leave after the 5th, a 1-1 tie.

It's one game in a long season. Most experts predict the A's won't win more than 80 games this year, but Andrew Triggs will make at least a dozen starts, maybe even stay in the rotation for the whole season if his hip holds up. And maybe that's enough. They can't all be aces.