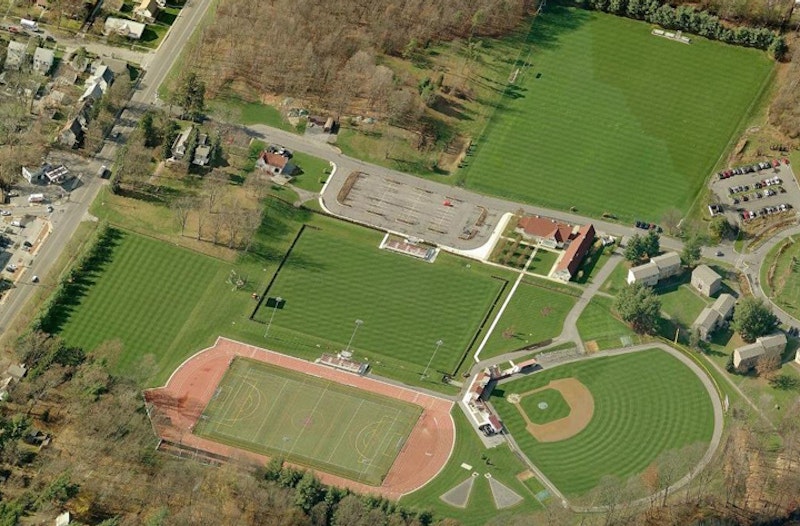 Try to watch local college baseball and the punishment is gale-force, scything winds roaring off Hooker Ave. in Poughkeepsie. The Vassar College Brewers were entertaining the Clarkson Golden Knights, who descended from their own Arctic Potsdam, NY, to play a doubleheader in the southlands of Dutchess County, New York. The twinbill was originally scheduled to be at home for Clarkson, but weather conditions indicated no dice.

The Brewers sat atop the Liberty League with a 1-0 record thanks to a win over the Skidmore Thoroughbreds at mid-week when weather finally permitted the student-athletes to take to the diamond. Division III NCAA baseball in the northeast usually features a half-dozen postponements on the schedule which begins optimistically in early March. Most teams use their spring break to play a slate of games at various invitationals in Florida, spicing up their schedules with exotic non-conference opponents such as Waynesburg, Medaille or Grinnell. Doubleheaders are pretty much the norm.

Vassar’s Prentiss Field is a tidy facility stretched out a few rural blocks from the gothic gates of the college. It’s very near the Vassar Farm and Ecological Preserve where the college holds an annual deer cull that always draws controversy.

Game one of the weekend of doubleheaders was chock full of Vassar wheel plays and bold pick-off attempts because Clarkson had lots of runners to go with plenty of road fan support of the parental variety. Moms and dads scratched their heads every time Vassar catcher Cory Wuenschell would step in front of the plate and bark a three-digit code relayed to him from the dugout and the infield defenders became a blur of crimson and white uniforms performing what used to be called a Chinese Fire Drill but is now just called “running around.” Wuenschell’s Pittsburgh accent didn’t really come out when he was yelling numbers, but he is a yinzer, according to the Vassar game program.

Clarkson hurler Jarrod Mattingly (from Philly, no relation to Donnie Baseball) had the Brewers off balance at the plate for much of the game, but the wheels came off in the bottom of the sixth as two Golden Knights relievers could not keep Vassar from putting up a six-spot and taking the lead for good.

The story for the Vassar boys thus far has been the smelting hot production of senior Brett Zaziski of Randolph, NJ. He plays the game with an ease rarely seen at the Division III level. His dad watches from beside the Vassar dugout wearing an official Brewers windbreaker with Zaziski’s number 23 on it and just “Brett” embossed above the number. Counting the parents that travel with teams, attending college baseball can seem like a Big Little League, except instead of sixth graders there are economics majors on the hill and maybe an unshaven environmental science hopeful in the on-deck circle.

Zaziski is coming off an All-American 2013 campaign and was honored for that last year by the Jewish Sports Review. Brett is a political science major and his favorite movie is the Denzel Washington football vehicle known as Remember the Titans, according to the Vassar athletics website.

Though Saturday’s arctic blasts made it very difficult to endure the twinbill split, the teams returned to Prentiss Field to bright sunshine and more favorable conditions on Sunday. They split again, and Zaziski actually went hitless in the first game. That aforementioned Vassar website also lists among the box score stats an easily-compiled attendance figure for each home game. I’m doubtful of the accuracy of the 66 souls who were supposedly on hand for the Saturday chillfest. But who are we to argue with Vassar sports information officials? Who shall cast that first stone?

Being one of the Seven Sisters but having no athletic conference to reflect such a dated femininity, Vassar sits in Poughkeepsie with a library that is a thing of beauty. Driving back home after the ballgame my frostbitten eyelids sprung open at the sight of a white-haired gentleman on a bicycle near the college gate. He looked just like the late Newsday columnist Murray Kempton who probably invented the word “wordsmith” because his copy was a three-course meal every time he tapped a keyboard. I thought about Kempton’s rich antics such as quoting LaFontaine at the drop of a hat—how he reminded his readers the French poet “taught us that misfortune is a kind of innocence”—and then Murray would tie it all into a current Board of Ed scandal or a tree blight in Van Cordlandt Park.

Kempton memories gave me a stinging thirst, so I seized the afternoon opportunity to stop into a forgotten barroom—a rectangular collection of siding propped up on the wrong side of Hyde Park on Route 9G. The Amber Lantern is a daytime place that used to get workers from a nearby printing company, but few people stop in now because it’s pretty much unmarked. Its amazing feature is a stone fireplace with a waist-high hearth opening up against the left side of the bar. One log was burning on the cold Saturday. A local couple known as the Roosevelts had been visited long ago, way before the drop ceiling was installed. Busch beer, as advertised in the faded window neon, is the only draft for $1.50 a mug. The ubiquitous flatscreen high-definition TV (every Blarney Stone in Manhattan has six of these now) had the Mets game on and two guys grumbled when Ike Davis came in to pinch hit in the ninth inning with the bases loaded and the Reds up 3-2. Isaac Benjamin Davis, a Minnesotan who played his college ball at Arizona State, has been the Mets whipping boy for the past year or so and benched in favor of Lucas Duda at first base. Davis proceeded to hit a grand slam for a walk-off winner, a majestic towering drive to right. Unlike the weekend full of Vassar splits, Ike’s homer had baseball flashbulb memory written all over it.