At 25, no closer compares to the Atlanta pitcher. 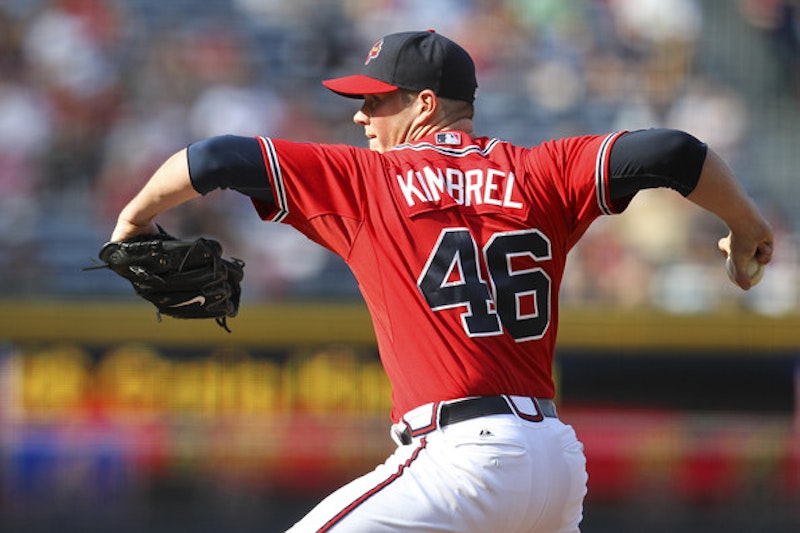 The retirement of future Hall of Fame closer Mariano Rivera left a hole in the Yankees’ bullpen and in baseball’s roster of shutdown closers. The Yankees have replaced Rivera with his long-time protégé David Robertson, a strikeout machine and seemingly worthy successor. (Robertson just went on the DL.) While Robertson’s value as a closer and Rivera replacement will be judged over the next several seasons the next Rivera has already arrived.

Craig Kimbrel is a former National League Rookie of the Year, the Atlanta Braves closer, and the stats he’s has amassed in his brief career are astounding. In just three full seasons the right-hander has saved 141 games, compiled a 1.37 career ERA, and fanned 385 batters in 229 1/3 innings. Kimbrel has allowed just 123 hits in those 229 1/3 innings and his career WHIP of 0.894 would rank as the lowest in baseball history if he had the required 1000 innings to make the list. Rivera, considered by many to be the greatest reliever ever, ranks third on the all-time list with a WHIP of 1.003.

Kimbrel is a three-time All Star and has led the National League in saves in each of the past three seasons. The Braves, at one time a national brand thanks to the reach of TBS, are now more of a regional team which means that Kimbrel is a regional star. Atlanta has made the playoffs three times in Kimbrel’s four seasons but have failed to advance past the opening round. As a result Kimbrel has lacked opportunities to shine on the national stage. The 25-year-old fireballer has made just six postseason appearances in his career and has yet to pitch in a championship series.

The Braves lost All Star catcher Brian McCann to the Yankees in the offseason, then lost pitchers Kris Medlen and Brandon Beachy to arm injuries during Spring Training. Atlanta starts the 2014 season as a middle of the pack ballclub in the National League East, just another team chasing the favorite Nationals. While the Braves face great uncertainty this season the one constant figures to be the otherworldly reliever at the back of the bullpen.