He could be flipped in mid-summer. 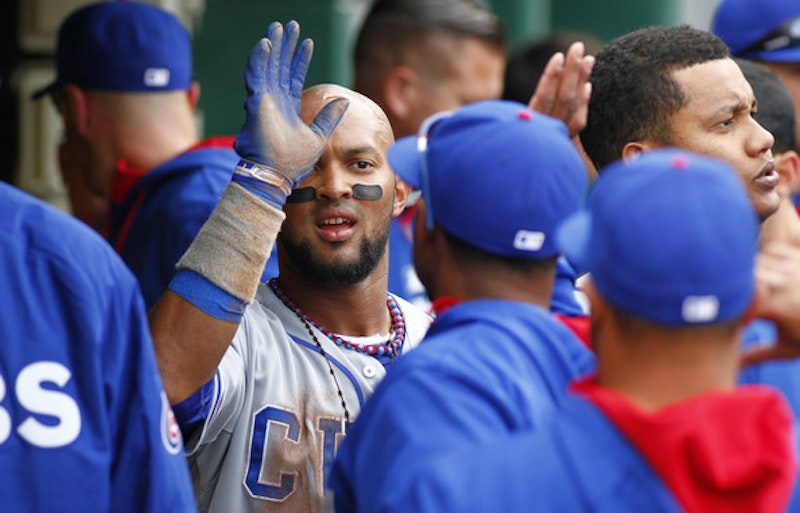 The Chicago Cubs didn’t make many headlines during the winter. The team’s biggest news was whiffing on Japanese import Masahiro Tanaka. Chicago did make several smaller moves designed to stabilize the team and build a bridge to the influx of prospects expected over the new few seasons. The under-the-radar addition of Emilio Bonafacio has been a huge boost to rookie manager Rick Renteria’s lineup over the first two weeks of the season.

The Kansas City Royals released Bonifacio after his dismal 2013 season prompted the club to sign free agent second baseman Omar Infante. The Cubs added Bonifacio in mid-February hoping that his speed and versatility would be better served in the National League. The 28-year-old has established himself as Chicago’s leadoff hitter and the reincarnation of former Tigers’ Mr. Everything Tony Phillips. Bonifacio has already started games at third base, second base, and center field. His hot hitting and versatility has allowed Renteria to mix and match youngsters like Mike Olt, Junior Lake, and Ryan Kalish depending on pitching matchups. Cubs fans shouldn’t get too comfortable with Bonifacio among the league’s leading hitters (he has a career .670 OPS) but his versatility should pay dividends throughout the season.

The Cubs also added starters Jason Hammel and James McDonald, both coming off injury plagued 2013 campaigns. Chicago was no doubt hoping to buy low and sell high on the pair just as they had with Paul Maholm in 2012 and Scott Feldman last season. McDonald, who was dismal in Spring Training, was placed on the disabled list at the end of March, with no timetable for his return. On the other hand, Hammel has been terrific in his first two Cubs starts. The former Oriole right-hander is 2-0 with a 2.63 ERA and has walked just two batters while striking out 11 in 13 2/3 innings. If Hammel can regain the form that led him to a 3.43 ERA in 20 starts for the 2012 Orioles he could join Bonifacio as a prime trade candidate after the All Star break.

Despite the strong starts of Bonifacio and Hammel, the Cubs are still the odds-on favorite to bring up the rear in the NL Central. The veteran duo should help buy some additional minor league development time for prospects like C.J. Edwards, Arismendy Alcantara, and Javier Baez. Chicago is no doubt hoping that Bonifacio is having a career year in his age 28 season and can be flipped for a prospect or two later this summer. If Hammel can stay healthy and bring a similar haul to last year’s Feldman trade (Jake Arrieta and Pedro Strop) his signing will be a big win for the Cubs.