There’s no clear favorite in MLB’s most competitive division. 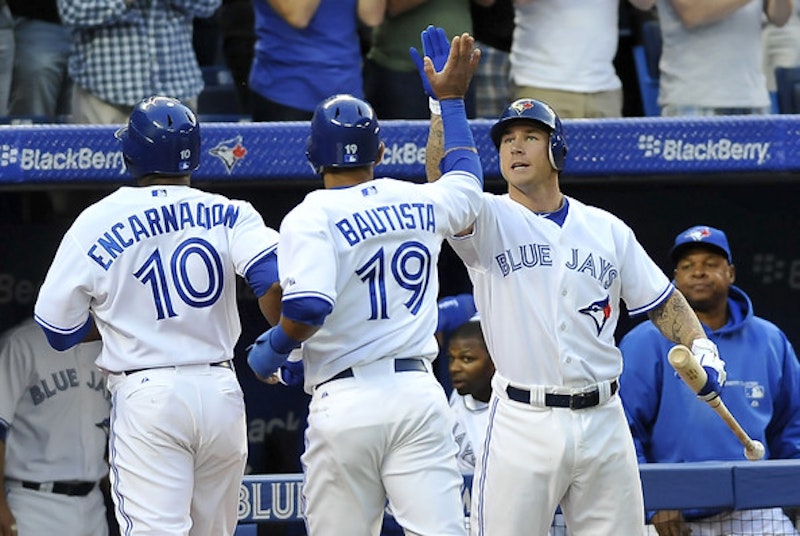 Boston Red Sox: Let's start with the defending champs. The Sox rode a hot pitching staff and some unpredicted offensive contributions by the likes of Jarrod Saltalamacchia, Stephen Drew, Daniel Nava, Jonny Gomes, and Shane Victorino to the World Series crown. Now with Saltalamacchia in Miami, Drew still looking for work, and the others unlikely to repeat last season's output the Red Sox will rely on a trio of young players to fill in the gaps. Xander Bogaerts and Jackie Bradley Jr. are the new hot shots but just two seasons ago Will Middlebrooks was the jewel of Boston's farm system. Middlebrooks posted an impressive rookie campaign in 2012 but succumbed to struggles and injury last season. The 25-year-old may never be a defensive standout but his four Spring Training home runs, and new contact lenses, could be a harbinger of good things to come in 2014. Middlebrooks, who has 32 home runs in 615 Major League at bats, looks poised for a breakout.

Tampa Bay Rays: The Rays will be powered by a dominant starting rotation, the bats of Evan Longoria and Wil Myers, and human Swiss Army knife Ben Zobrist. The 2013 Rays finished behind Boston in the division race last season thanks in part to Fernando Rodney’s eight blown saves. Tampa’s biggest offseason move was replacing Rodney with free agent closer Grant Balfour. The Orioles originally inked Balfour to a two-year contract but that pact fell through after a failed physical. The Rays came to Balfour’s rescue with a two-year offer of their own and hope that the veteran closer can provide some much needed stability at the back of the bullpen. If Balfour can stay healthy and productive—he saved 38 games in 40 chances for Oakland last season—the Rays could have the firepower to overtake the Red Sox.

Baltimore Orioles: The Orioles added free agents Nelson Cruz and Ubaldo Jimenez to a talented roster that was in the Wild Card race until the final week of the 2013 season. Jimenez will front Baltimore’s rotation alongside Chris Tillman and ahead of Miguel Gonzalez, Wei-Yin Chen, and Bud Norris. Former first round pick Kevin Gausman was recently option to Norfolk despite being the Orioles’ third best starter in Spring Training. Gausman is expected to remain at Triple-A for the foreseeable future but the youngster’s impending emergence could propel Baltimore to the top of the division. The trio of Tillman, Jimenez, and Gausman will soon be a formidable force and it could be coming to Camden Yards this summer.

New York Yankees: The Yankees’ recent spending spree was obnoxious even by Yankee standards. The additions of Brian McCann, Jacoby Ellsbury, and Masahiro Tanaka were enough to get the Yankees back into the national forefront and steal some headlines from the Red Sox but they won’t make up for an infield featuring Brian Roberts, Derek Jeter, and Kelly Johnson. Tanaka will be under the most pressure but the Yankees’ x-factor this season is right-hander Michael Pineda. New York sent prospect Jesus Montero to Seattle following the 2011 season for Pineda. He has yet to throw a regular season pitch for the Yankees. After Tommy John surgery in 2012 and another year of arm problems Pineda is finally healthy and ready to contribute. Pineda was dominant in Spring Training and his high strikeout totals could lessen the defensive downside of pitching in front of Roberts, Jeter, and Johnson.

Toronto Blue Jays: The Jays’ quick fix scheme prior to the 2013 season resulted in a last-place finish. The outlook for 2014 isn’t bright but the continued maturation of third baseman Brett Lawrie could provide Toronto fans with some hope. Lawrie came to Toronto with the reputation of being a premium offensive prospect. To this point the Jays have only witnessed brief glimpses of Lawrie’s potential. After battling injuries for much of 2013 Lawrie is finally healthy and sporting a more mature attitude according to Spring Training reports. Lawrie could team up with Jose Bautista and Edwin Encarnacion to give the Jays the kind of long-ball power needed to rise from the basement of the AL East.