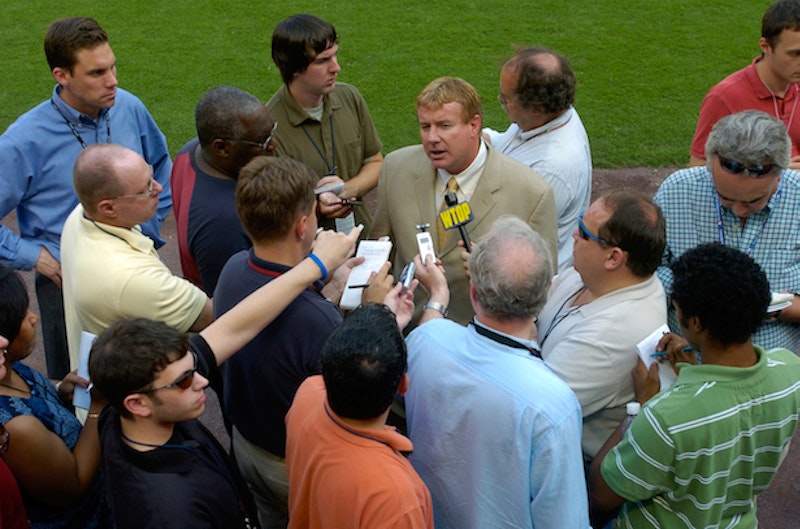 Jim Bowden finally made a good point. In a recent article for ESPN, he listed 13 young players that should be locked up to long-term extensions. He was even realistic about it. He broke the players up into two groups: Scott Boras' clients and non-Boras clients.

Praising Bowden is no easy task. We’re dealing with the man who criticized the seven-year/$130 million Shin-Soo Choo contract not for its dollar value or the player’s concerning platoon split, but because “[Choo] has never won a Silver Slugger, Gold Glove or ever been voted or named to an All-Star.” Nice insights, Jim.

I’m swallowing a lot of pride with this statement, but Bowden is right on this score. Manny Machado, Wil Myers, Michael Wacha, Josh Donaldson, and everyone else he listed, need to be locked up as soon as possible.

The article generated the type of comments Bowden usually receives:

Swamilee’s Sportscards & Collectibles: “Yes, if you had a good year in 2013, you should get a 6-8 year deal. It's so easy to be a GM these days. I'm surprised they bother paying the big bucks for GMs. Any moron can dole out a 6 year contract to a 23-year-old with one good season in the majors!”

Mary Brick: “And that’s why [Bowden’s] not a GM any longer.”

Jonathan Brown: “Just do us all a favor and die, Jim Bowden. Just die.”

But for the first time, I’m siding with Bowden. Extensions have been handed out like crazy in the last year, and now premium players won’t make it to free agency until their declining years. There’s benefit to this: Buster Posey, for example, with be a lifelong Giant. Joey Votto will always wear a Reds uniform. The Braves are paying Freddie Freeman only for the seasons they actually want him. There’s a downside, too, though: free agency will suffer badly.

Most people probably take that as a positive. It just means there will be fewer players for the Yankees and Dodgers to steal away from small market clubs. That’s not true, though. It means that the premium players who do reach free agency will have virtually no shot at re-signing with their previous club, because the low supply of premium talent will skyrocket their price tags.

There’s also the inevitable fact that many of these extensions will go sour. Sure, right now it looks like Matt Carpenter (six years/$52 million) and Craig Kimbrel (four years/$42 million) are good investments, but we’ve seen far better players tank after securing a nice paycheck. Injuries are another obvious worry.

But the pros far outweigh the cons. Small market clubs now have the ability to keep their star players because of the TV money flowing into baseball. Machado would have been a virtual lock to bolt for free agency once his six years of service time had elapsed in Baltimore. Now the O’s have a legitimate shot at retaining the budding superstar. Even the Rays can afford to extend their youngsters.

But the time is now. If Baltimore waits another two or three years, the barren free agent market will look awfully tempting to Machado, who will be eligible for free agency at the age of 26.

This extension bubble will burst at some point—either due to player or team unwillingness. My bet is the former. Young players will see how potentially fruitful the free agent market can be, and they’ll decide to shirk long-term extensions for the big money potential that free agency can grant. I bet it starts with José Fernández. The 21-year-old is quickly establishing himself as one the best pitchers in baseball. There’s also no way he agrees to a long-term pact: he plays for the Marlins and is represented by Boras.

Barring injury or a dip in performance, Fernández, who will enter the open market at age 26, could become the richest player in sports history. So yes, Jim Bowden is right. Lock up your players now, before Fernández inspires them to sign with the Yankees.