Jeremy Lin Will Run You Down

But is all the hype just about his race? 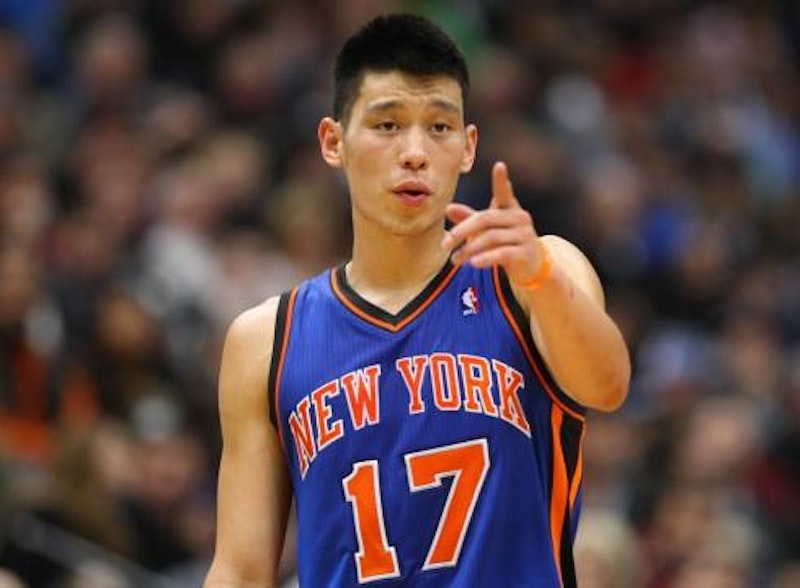 In just one week Jeremy Lin went from an unknown New York Knicks benchwarmer to the NBA's story of the year. Lin has captured the hearts of the Madison Square Garden faithful, drilled game winning shots, out-dueled Kobe Bryant, and sparked an unprecedented pun parade. Most importantly Lin has done something Carmelo Anthony, Amare Stoudemire, and Isaiah Thomas couldn't do, make the Knicks a relevant NBA franchise.

Madison Square Garden is often revered as the most famous basketball arena in the world. The Knicks of the past 30 years haven't done much to add to that legacy. Other than a NBA Finals appearance against the Rockets and some fistfights with the Miami Heat in the 1990s the Knicks have been largely irrelevant. The team’s only saving grace has been playing in New York, and in MSG. As for on court performance they might as well be the Bucks or the Hornets.

Enter Jeremy Lin. The young point guard was inserted into the lineup by coach Mike D'Antoni out of desperation; Anthony was out due to injury, Stoudemire was out after the death of his brother, and the once dynamic Baron Davis hadn't been medically cleared to play. Lin took hold of the opportunity and ran with it, or at least he has for the past week and a half. The ridiculous focus by ESPN on all things Lin has taken on Tebow-mania proportions. Much like Tebow, the public shouldn't hate Lin for the attention he's receiving. ESPN has three networks worth of airtime to fill. They need to talk about something and Lin is the topic du jour. If you're tired of hearing about Lin then turn off ESPN. They'll pound him into sand over the next few weeks and then spend just as much time tearing him apart after he eventually cools off.

Yes, he will eventually cool off. Lin has proven that he's good enough to play in the NBA. He's a great story while it lasts but comparisons to Steve Nash are ridiculously premature. The league will catch up to him, defenses will find his weaknesses, and then it will be up to Lin to adjust.

I think much of the craze over Lin's performance is the fact that he is Asian-American. Yao Ming was a once in a generation physical freak. Lin is a 6'3" 200 lb. guard. As a society, we are simply not accustomed to seeing an Asian player dominate on the basketball court, and NBA players sure as hell aren’t used to being beat off the dribble by an Asian kid. It is entirely possible that team's were reluctant to give Lin extended playing time because of his race. Fans, coaches, and scouts develop opinions on players after small sample sizes, or sometimes based solely off of physical appearance. The fact that Lin is Asian and played his college ball at Harvard was two strikes against him before anybody even looked at game tape. I'm not saying that the NBA teams that passed on Lin did so because of an anti-Asian agenda, but they may have been biased towards Lin because of his race and the stereotyping that goes along with it.

The Lin story is a perfect example of what makes sports great; 10 days ago I’d never heard of Jeremy Lin and now he's blowing up my Twitter feed. He'll crash to Earth at some point, and all the naysayers will pat themselves on the back for predicting his demise, and ESPN will have to create some other story to obsess over. If someone had produced a movie about an Asian-American kid who re-invented the Knicks and took NYC by storm we would've called it a pile of sappy, feel-good nonsense. Well, it's happened for real. Let's enjoy it while it lasts and remember Jeremy Lin as an example of hard work, seizing opportunities, and breaking through stereotypes.