A story about a bodybuilder who was determined to set a personal record but died trying. 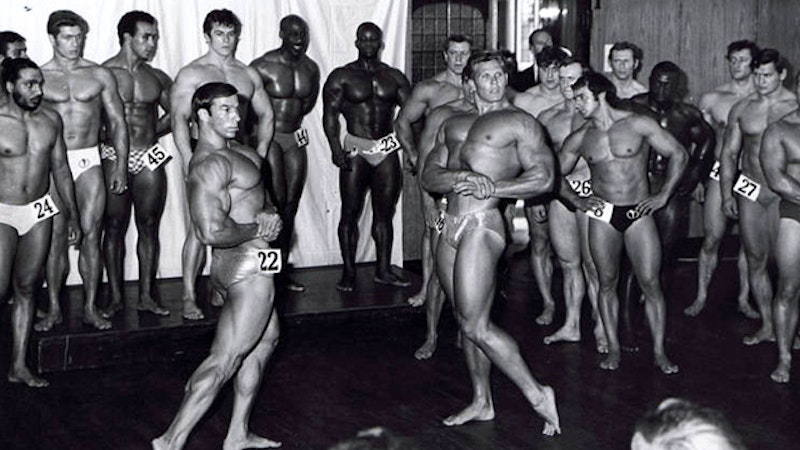 Davy “Brick” Shidaus, Anytown’s most perfectly developed man, admired his pectoralis major muscle in the full-length mirrors of the “hardgainer” gym. As far as thick, fan-shaped muscles situated at the anterior of the body went, his pectoralis major took the carb-free, gluten-free cake.

“Take a gander at these bad boys,” he said to his rival Chayne “Link” Hughes, who was the most perfectly developed man in nearby Real Big City. “Ever see anything like that here in the Quad Cities region?”

“Hot dang,” “Link” Hughes said, clicking his tongue in admiration. “You sure got a nice pec deck, ‘Brick.’ It might even be the best one in the Tri-State area. You going to the physique sectionals next week?”

“Hell, ‘Link,’ I’m ready to go right now now. These are just about the prettiest pecs that the Tri-State area has ever seen,” “Brick” said, pounding his pectoralis major with his huge ham hock of a fist to punctuate this statement. When his fist struck his pectoralis major, he suffered an acute myocardial infarction and collapsed to the ground.

“‘Brick,’ good god, you all right, man?” “Link” asked, inwardly quite relieved that one of the leading contenders at the physique sectionals had probably eliminated himself from the competition. “You having another stroke? Or is it your heart this time?”

“Brick” vomited all over the floor, shook for a little bit, and then fell still.

“Well don’t that beat all,” “Link” said to Paul “Punching” Bagge, Dullsville’s most perfectly developed man. “Hey ‘Punching,’ you mind giving me a spot on these shoulder presses? I’ve got to get these reps in before my hemorrhoids start leaking too bad.”

“That time of the month, eh?” joked “Punching” Bagge.

“Yep, buddy, I’m ragging it,” “Link” admitted. “Anyway, let’s get moving. Looks like the ‘short man’s’ division of the Tri-State Physique Sectionals is up for grabs again.”

It was, all things considered, a rather pathetic way for a Tri-State hardgainer as well developed as “Brick” to go out. He had everything working for him, if by “everything” one means a willingness to lift weights and a reliable black market connection for steroids and human growth hormone. What happened today was tragic, at least if you’re among those people who get their rocks off misusing that adjective, but it was also understandable that a man whose blood pressure was something like 200/150 might end up dying of a heart attack. I mean, there was a kind of symmetry to it, is what I’m trying to say. It was also ironic or “ironical” that his best pals, who weren’t his best pals but in fact his fiercest enemies, abandoned him during this time of need in order to work on their own reps and sets.

What I’ve tried to tell you is one very sad story, but maybe I put too much of myself in it and what I wanted to convey doesn’t seem as sincere as it could’ve been if I genuinely cared about these idiotic characters. Not that it should, seeing as how I’m a lousy writer, but since when did you deserve Hemingway waxing rhapsodic about “our nada who art in nada” or whatever? I know you like the back of my favorite Michael Crichton novel, hotshot: You vape e-cigs by the carton, spend all night playing Overwatch, don’t use a washcloth, kiss dogs and cats right on the mouth, and are unable to distinguish between painlessness and pain. Nor, for that matter, can the late “Brick” Shidaus, because that poor old tub of growth hormone-engorged guts happens to be deader than dead, and when you’re that dead, you can’t distinguish anything at all.