He’s one of the NHL's greatest characters of the century. 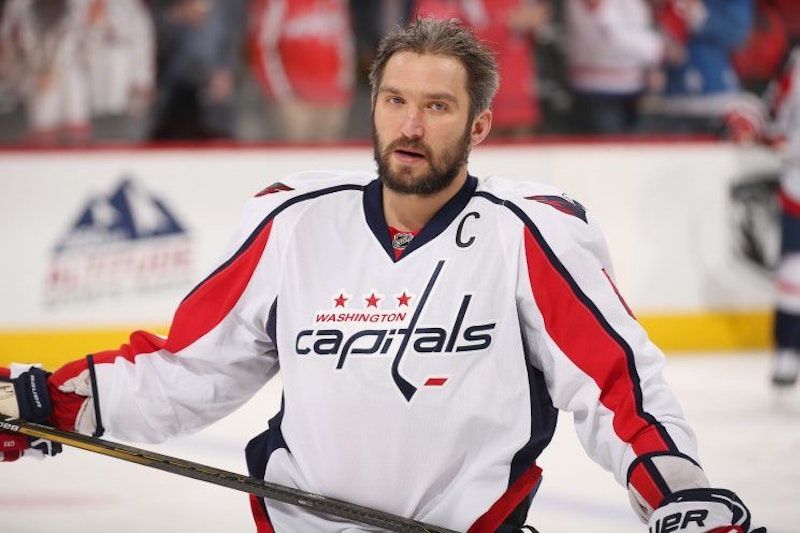 One night in Montreal not long ago, a hockey game between the Washington Capitals and Montreal Canadiens was tied at four with a few seconds to go in the third period. Canadiens defenseman Jordie Benn had the puck deep in his zone. Then Capitals forward Tom Wilson picked his pocket and whipped a pass cross-ice to superstar Alexander Ovechkin, who already had two goals in the game. Ovechkin was in his favorite shooting spot, the left faceoff dot, and dropped to his knee to rip a perfect one-timer. It should’ve been unstoppable. It wasn’t, because Canadiens goaltender Carey Price is an all-star himself; sliding to his right Price made a spectacular stop, deflecting the puck over the net out of play.

Highlight-reel shots by Ovechkin on the faceoff dot are common. Highlight-reel stops by Price are frequent. What happened after Price turned away the buzzer-beater was what made the play memorable: Ovechkin raised his eyes skyward, then slowly raised his gloves to clap along with the crowd before giving Price a congratulatory tap.

As a rule, hockey players don’t applaud their opponent. The Capitals won the game in overtime. But Ovechkin’s reaction was the story. He’s a rarity in the NHL, a charismatic superstar. He may be the greatest goal-scorer in NHL history, but he’s also one of the greatest characters to come into the league this century.

Ovechkin’s now 33. Drafted in 2004, a season-long lockout meant he started his career in the 2005-‘06 season, when he scored 52 goals and won the Calder trophy for rookie of the year. He’s played, at this writing, 1027 regular-season games in his career and scored 625 goals, throwing in 525 assists—and 661 penalty minutes. At 6 foot 3 and 239 pounds, Ovechkin’s a physical force, making it the more impressive that he’s never had a serious injury or missed more than 10 games in a season (the 2010 season, when he still hit the 50-goal mark).

To the foregoing, add 121 playoff games, with 61 goals, 56 assists, and 54 penalty minutes; also three trophies as the league’s outstanding player (voted by the NHL players), three Hart trophies as the league’s most valuable player (voted by the Professional Hockey Writers’ Association), one Art Ross trophy for most points in a year, and seven Rocket Richard trophies for scoring the most goals in the NHL. In more than half of the seasons since Ovechkin came into the league, he ended the year with the most goals scored.

Ovechkin’s about to move into sole possession of 15th place in goals scored in his career. He should end up a lot higher than that; it’s not impossible that he ends up eclipsing Wayne Gretzky’s all-time mark of 894. That’s impressive in an era when goals aren’t easy to come by. Gretzky scored a lot of his goals in the high-flying 1980s, when goalies hadn’t developed modern techniques, and third-pair defensemen and fourth-line forwards couldn’t play as quickly or as well as they can now. In any case, Ovechkin’s the kind of superstar who can’t be defined strictly by numbers.

Watch some of Gretzky’s old games, or games with the other great player of this age, Sidney Crosby, and you see consummately skilled athletes who know where everybody’s going to be on the ice before anybody else does, and position themselves accordingly. You can lose track of them. Ovechkin’s not like that; he’s the kind of player, like a Guy Lafleur, who draws the eye. He improvises, or so it seems, imposing his will on games at the moments you least expect.

Watch him on the ice and you see a goliath who has one purpose in life: score goals. This isn’t to say that he ignores the defensive zone, only that he comes alive when the puck’s moving toward the other guy’s net. For all his mass he can control his speed and acceleration like few players: glide in out of nowhere, or charge with skates flailing. Even knocked down, he can score while falling, score while flat on the ice.

Like Gretzky, there’s a spot on the ice that’s known as his office. Gretzky had the area behind the net. Ovechkin has the left faceoff dot. Everyone on every team he plays against knows his habits, but it keeps happening. He’s got a range of tactics, but also a knack for making things out of nothing. I was first really awed by Ovechkin in 2008, when his Capitals were in the playoffs for the first time, facing the Philadelphia Flyers. I saw the Flyers defensemen with the puck in their own end, their forwards flying the zone as Ovechkin came in on the forecheck. I knew what would happen next because it happened 100 times a game. There’d be a pass from one defensemen to the other, and the second defender would move the puck up to the forwards. Routine; a standard play. Except this time Ovechkin put on a burst of speed, the Flyers defender was flustered, and then Ovechkin had the puck and was in alone on the goalie, and then it was in the net and I was staring, my jaw dropped, wondering what the hell I’d just seen.

I already knew Ovechkin was a great player. And a great quote. Always smiling off the ice, for his whole career he’s clearly been having fun, approaching life and fame with an irreverence all the more engaging for his less-than-perfect English. At a ceremony awarding him the key to the city of Washington, he proclaimed “I’m the president this day in the city, so everybody have fun and no speed limit.” When the NHL considered banning tinted visors like the one Ovechkin wears, worried it somehow gave players a competitive advantage, Ovechkin argued, “I wear tinted visor not to trick other players, but so hot girls in stands don’t see me looking at them.” Once, when he showed up to practice the day after taking a bad shot off his foot, he told reporters “I’m okay; Russian machine never breaks.” (The quote’s now the name of a Capitals fan blog.)

Born to two star athletes in the mid-80s, just as the Soviet Union was collapsing, Ovechkin grew up in a hard neighborhood and switched into a specialized sports school that had him up at six a.m. each day. He noted, for a GQ profile in 2010, that a lot of his school friends had died from drug abuse; others were in prison. For Ovechkin, as so many other kids through the years, hockey was an escape. According to that profile, he was, ironically, a huge fan of Mario Lemieux and the Pittsburgh Penguins—as it turned out, the future home of Crosby, drafted first overall the year after Ovechkin, and of Evgeni Malkin, drafted second behind Ovechkin in 2004. The hockey press has subsisted for 14 years on Ovechkin-versus-Crosby articles; both came into the NHL tabbed as generational players, and both lived up to their hype. Crosby’s usually come out on top in head-to-head matchups. He’s had deeper teams, for the most part, both in the NHL and in international play.

That changed last year, when Ovechkin led the Capitals to the franchise’s first Stanley Cup, winning the Conn Smythe trophy as the most valuable player in the playoffs. The Capitals, led by Ovechkin, proceeded to go on one of the biggest benders in recorded history. You can understand why: for years there’d been questions about the team and Ovechkin’s leadership, character, ability to elevate other players, and ability to come through in the clutch. Those questions had all been answered. Winning does that.