To me this is a pretty obvious win for the good guys. 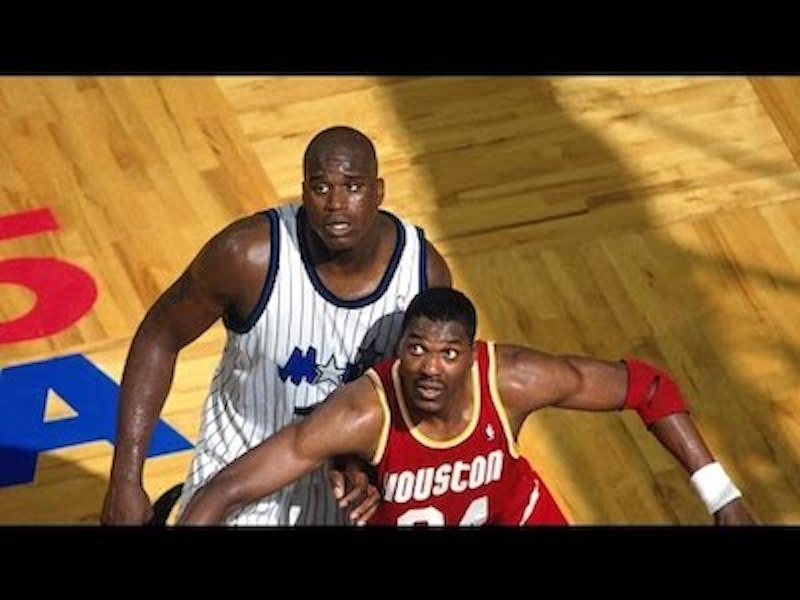 Splice Today’s Oliver Bateman and I recently played a favorite game of mine, choosing an all-time NBA Top Five. Given Oliver’s enthusiasm for entertainment and competition, his encyclopedic knowledge of sporting arcana, and his grasp of strategy, I assumed this would be a tough match-up. Imagine my surprise when Oliver made several gaffes that allowed me an easy victory.

With his first pick, Oliver takes Hakeem “The Dream” Olajuwon. I love Dream, but this is a terrible pick. First, center is the deepest position in NBA history, hands down, when assessing how many legendary players have manned the position. Chamberlain, Kareem, Russell, and so on. Picking a center last, you’re nevertheless guaranteed to draft a player for whom an argument can be made that he’s the greatest of all time.

I go with Magic first. This is risky for two reasons: first, he’s not the ideal fit for every team (my team, for instance), and second, I’m leaving Jordan on the table. However, Magic presents a fundamental match-up problem against any PG, so I take the risk. Moreover, Oliver’s Olajuwon pick suggests he’s being cute, which of course he is.

In the second round Oliver gets serious: LeBron James. Match-up problems for me. Three picks in, I steal the GOAT and add Jordan to my team. While these two now largely dominate the conversation about the greatest of all time, I’m confident that the gap between Jordan and anyone else at the shooting guard position is greater than that between James and another small forward. At this point I have the greatest point guard of all time and the greatest player, greatest clutch performer, and greatest competitor of all time. Looking good.

Bateman: Durant. Jenkins: Bird. I’m not so concerned about Bird facing up against the far more athletic James. Bird hung 20 on Dominique Wilkins in the fourth quarter of the ’88 Eastern Conference Finals to take the series. Pretty sure ‘Nique had an edge in athleticism, too. Durant is a nice pick and I think he’s earned the right to enter this conversation, though it’s clear Oliver is simply trying to find a player who can knock down a jumpshot.

In round four Oliver goes old-school and brilliant, grabbing Jerry West. I love this pick myself, as many people are stunned when they see his stats. West certainly gives the Batemansburg Balljigglers a legitimate outside presence and a first-class clutch performer (albeit an all-time great bridesmaid). I grab Dirk Nowitzki. It’s not my favorite pick, as he’s a poor defender (worse than Durant, who’s also somewhat of a one dimensional player in this company). Still, he is a better rebounder than KD and matches up well in offensive efficiency.

All I have to do is pick a center to dominate Olajuwon, and I take Shaq. I could’ve grabbed Wilt (the strongest player in NBA history, bench pressing over 500 pounds, who also registered the highest vertical leap ever at 48”), but I decide to let an Orlando-era Diesel run rampant against what is essential a small ball team. With Shaq getting up and down the floor like he did with Penny Hardaway, with Magic running the break… backboards will be broken.

To me this is a pretty obvious win for the good guys. I have a major edge at point guard and shooting guard. I have the edge at center, and a center whom no player on Oliver’s team can realistically hope to defend. One could argue that LeBron is a far superior player to Bird, but then we’d know you’re young and stupid. And I have the GOAT.

I’m outrebounding Oliver at every position except center, where Hakeem grabs an additional 0.2 boards a game. Overall, I have a 7.3 rebound edge across both teams. It’s not the sexiest stat, but it’s one of the best predictors of game outcomes: rebounds = possessions.

From the outside, Oliver’s shooting with Durant and West, while I have Bird and Nowitzki. I call that a wash, though I know which two who I’d rather have to carry a team to a championship. West won his lone championship with Elgin Baylor and Wilt Chamberlain on the team, and Durant plays with an all-star team around him. Neither ever won a championship as the unquestioned best player on his team, which Bird and Dirk were.

I have nearly twice the number of Finals MVP awards on my team, 15 to eight. With the possible exception of Shaq/Olajuwon, I can claim the more clutch performer at every position, in my (correct) judgment. My aggregate points per game comes in about a point a half better than Oliver’s, largely because of Nash’s lack of firepower.

And then, of course, there’s Jordan. I have the GOAT. Oliver had two chances to take him, but I somehow stole the best offensive player and the best defender with the fourth pick. Michael Jordan’s points-per-game average is nearly three points better than that of LeBron, Durant, or West, providing us with a clear number one option on offense. On the other side of the ball, though Dream won two DPOY awards to Jordan’s one, his Airness was awarded first team all-defensive honors nine times to Olajuwon’s five. There are no others in this conversation.

In the end, Oliver’s inspired selection of Jerry West could not compensate for squandering the first overall pick and starting Steve Nash on a team of all-time greats. Though I look forward to many more iterations of this diverting exercise, I hope that Oliver will step up his game in future match-ups.