Jackie Bradley Jr. is a Reason to Root for the Red Sox

This year’s World Series is up for grabs. 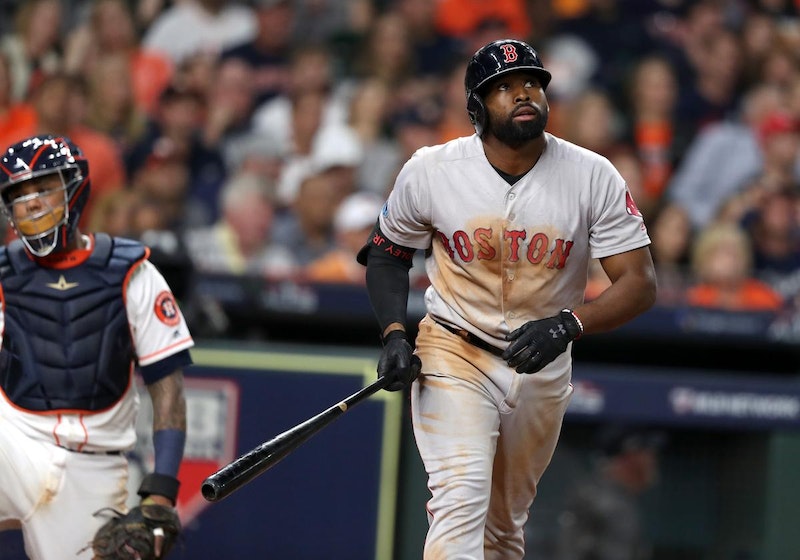 The Boston Red Sox are one of two teams remaining in the MLB Postseason, having advanced to the World Series. This means if they win four more games, they will have won the World Series, which should really be called the MLB Championship, since most of the world has no idea that a World Series will start on Tuesday.

The Red Sox have home field advantage, which means Games 1 and 2 will take place at Fenway Park and, if they become necessary, Games 6 and 7 also at Fenway. Boston’s outfielders are excellent defenders, as they showed over the last two-plus weeks of postseason play. They know Fenway Park whereas the Dodgers outfielders will likely be confused by the eccentricities of the outfield in Boston, having little experience with the AL park.

Dodgers manager Dave Roberts will go down in Boston sports history as a legend for his epic steal of second base in Game 4 of the 2004 ALCS, inspiring the greatest comeback in the history of comebacks. Nothing against Roberts, but Red Sox manager Alex Cora will out-manage him.

Through 116 postseason ABs vs. left-handed pitchers, the Dodgers have only four extra-base hits. Boston's two best starters, Chris Sale and David Price are lefties. Sale looked very good against the Yankees, but had a rough start against Houston. Price had a brutal start against the Yankees, but tossed a gem in Game 5 in Houston. The Dodgers are not as balanced a lineup as Houston and their power plays better against righties.

Though regular season success doesn't necessarily predict postseason success, its clear these 108-win Red Sox are a force to be reckoned with. Dethroning the Astros in only five games, with 2-strike hits coming from up and down the lineup, stellar pitching by deadline-addition Nathan Eovaldi, great work from the whole bullpen (except closer Craig Kimbrel), and Price in Game 5. All the while, the Sox provided highlight-worthy defensive plays by Betts and Benintendi covering every inch of the grass beyond the infield.

The Dodgers, on the other hand, squeaked by Colorado with a tiebreaker win in Game 163, giving them 92. Milwaukee's pitching staff made the Dodgers offense look anemic through the first four games. The Dodgers have two very powerful hitters with advanced approaches at the plate in Manny Machado and Justin Turner. The others have power, but aren’t reliable. Max Muncy reinvented himself this year, but has struggled in the postseason. Cody Bellinger burst onto the scene last year. However, before his Game 7 homer in Milwaukee, Bellinger was even worse than Muncy. Center field is platooned by Chris Taylor and Joc Pederson. Taylor’s done an admirable job getting on base when he's replaced Pederson, who has no hope against lefties. Its tough to know what to expect from Yasiel Puig, though his three-run blast in Game 7 proved fatal to the Brewers hopes.

Jackie Bradley Jr. plays center field with an ease of movement and instinctive grace that’s hard to explain. Bradley always seems to take the best route to the ball, rarely makes a mistake, and knows how far he has to go before negotiating the aforementioned eccentricities of Fenway. His defense is rarely questioned. His offense often is. Bradley is notoriously streaky, his worst lasting more than a month. Bradley was barely above the Mendoza line (.200) for the entire first half of the season. In such a deep lineup, Bradley's defense kept him in against all righties, but he began to sit against lefties. Finally, as the calendar flipped to August, Bradley cranked more doubles, and occasionally popped one out. He finished the second-half with a .487 slugging percentage, a remarkable turnaround, salvaging what had been a woeful offensive year.

Those who appreciate Bradley for his defense and his very mortal experiences at the plate were overjoyed as they watched him connect on three gigantic hits against the Astros. Suddenly, one of the least feared hitters in Boston's lineup had nine RBIs in the series.