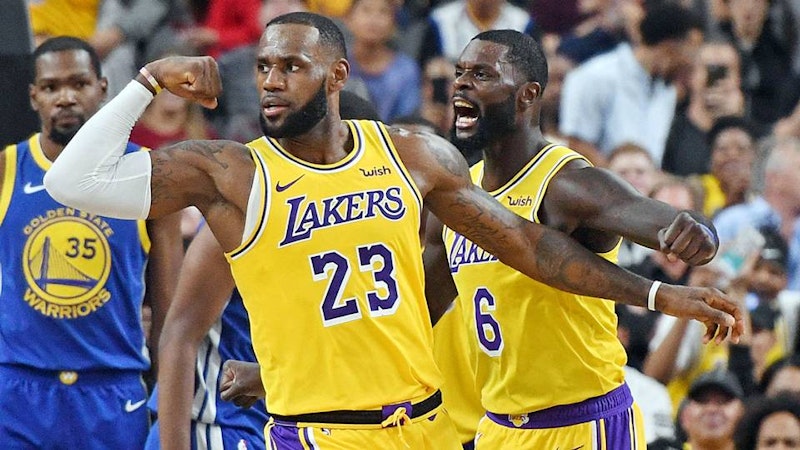 Healthy Celtics: Gordon Hayward's long trip back to the parquet won't allow for a seamless transition. Coach Brad Stevens has indicated Hayward will start the season with a minutes restriction. Celtics aficionados hope his explosiveness returns by December or January. He looks bulkier than in previous years. With Al Horford playing more center to make room for the trio of Hayward, Jayson Tatum and Jaylen Brown at the forward spots, Hayward will called on to rebound more than he did in Utah. Terry Rozier, whose playoff run will likely earn him a giant payday next summer, will be forced into a diminishing role. Assuming Kyrie Irving is 100 percent, it's a reasonable question to consider whether or not Rozier is traded to a fringe playoff team with a need at point guard for a future pick. With Brown and then Tatum extensions on the horizon, the Celtics can't afford to keep everyone. Boston's talent and depth will likely propel them to the top seed in the East, though they'll look best after the All-Star break.

How will Hayward's health progress and how will Rozier respond to limited minutes?

Toronto Revision: The Hitchcockian drama of Kawhi's Quadriceps is over. He was sent to the Raptors with gritty defender Danny Green for DeMar DeRozan and solid back-up Jakob Poeltl. Toronto's flame-out against the Cavs was too ghastly to absorb. GM Masai Ujiri chose to roll the dice on a disgruntled, yet truly dominant, MVP candidate. Most pundits believe Kawhi is healthy enough to assume 65+ games. In a new situation, with pending free-agency, he'll be plenty motivated. The young Raptors surrounding Kawhi are intriguing. How he meshes on the court with Lowry will go a long way in determining if they end up in the East Finals. Also, Fred VanVleet is the new Sam Cassell. Fierce and unflappable little guys are fun. Paskal Siakam is tantalizing. East contenders are hoping his range remains limited.

How will new, first-year head coach Nick Nurse balance the youth with the addition of Kawhi?

Budenholzer Boost: The Milwaukee Bucks may finish third in the East, benefitting from new coach Mike Budenholzer's player-friendly, modern approach. With the Hawks, Budenholzer and his staff were long-known as player development gurus. Brook Lopez will help space the floor and rebound underneath. What Lopez lacks in athleticism, he makes up for in savvy. The offense will be fluid and without Jabari Parker or John Henson, shooters will surround the unguardable Giannis.

Will the Brewers success carry on to the Bucks in late April?

Sixers Adjustment: The Sixers might finish fourth, regressing while they incorporate Markelle Fultz into the starting five. Fultz will eventually be a very good all-around player, but not right away. From a long-term perspective, restoring his confidence by having him play with such a dynamic group makes sense. Embiid and Simmons need to remain on the court for 70 or more games for Philly to keep up with the other three at the top of the East.

Will Brett Brown show he's as capable of outcoaching opponents as he is at encouraging and leading his young roster?

Pacers Now on the Radar: Victor Oladipo turned heads around the Association with his post-OKC rise in Indianapolis. The former Hoosier won the NBA's Most Improved Player Award, taking lessons from watching Westbrook and unleashing himself on the Eastern Conference. The Pacers won 48 games and gave Cleveland a huge scare in the first round of the playoffs. They added shooting in the reinvented Tyreke Evans, and should see continued improvement from Myles Turner and Domantas Sabonis. The Pacers played as intensely as any team last year. Don't expect that to change this year. The Pacers’ timing isn't great. Three of the East's top four seeds, health permitting, are all but guranteed to consist of Boston, Toronto, Philly, and Milwaukee. This means the Pacers will likely face one of those teams in the first round.

Heated Rumors: If Miami does land Jimmy Butler, they become a much more difficult out in the playoffs. Butler has demanded a trade from Minnesota but Tom Thibodeau is both the coach and GM. GM Thibs is trying to save Coach Thibs from getting fired, though there may not be much he can do at this point, despite a solid year with Butler. Miami needs a focal point for their offense. Their hard-nosed defenders keep them in most games, but to get beyond 45 wins, they'll need more shooting and slashing to the hoop. If healthy, Butler gives them what they need this year. At his age and with his miles, its not clear whether a max extension would be a wise move.

Low-Flying Hawks: Though Atlanta will be awful, Trae Young will get plenty of experience, showing the NBA his ridiculous range and giving Hawks fans reasons for optimism. Taurean Prince will not hesitate to launch. John Collins is a human pogo stick, ready to collect double-doubles. If they add some veteran defenders, the Hawks will be back around .500 soon.

Ragingly Inconsistent Bulls: Expect the new-look Bulls to have great and miserable nights. Rookie Wendell Carter Jr. can clean the glass. Jabari Parker returns home to add dynamism to the offense. Zach LaVine can get to the rim and knocks down enough threes, but he needs to prove he can make his teammates better and defend. Point guard Kris Dunn can smother opponents, but isn't yet consistent enough with his playmaking. The early injury to sharpshooter Lauri Markkanen hurts. The Bulls are another year away from the playoff bubble.