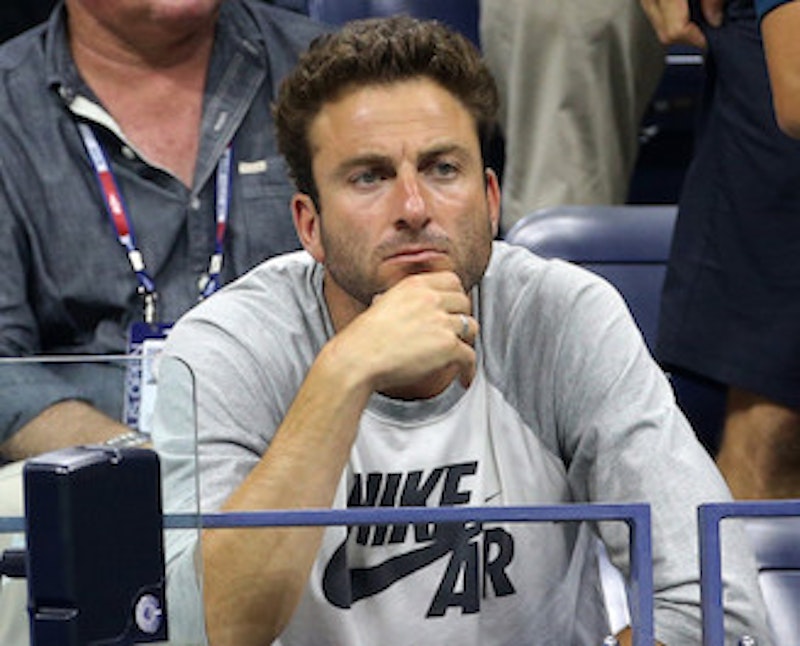 Back in July, during a six-and-a-half-hour marathon match between John Isner and Kevin Anderson at Wimbledon, a member of Isner’s traveling crew in the stands was so animated and vocal in support of his player that some people were asking, “Who is the man in the blue suit?” On October 31, according to an LAPD police report, the same man, this time dressed as a “Top Gun” pilot for Halloween, allegedly snuck up on a former friend, Randall Kaplan, who was walking in West Los Angeles at 6:30 p.m. with his wife and two-year-old daughter. Kaplan says Justin Gimelstob struck him in the head and face approximately 50 times while continuously yelling, “I am going to fucking kill you.” LAPD released photos of a bruised and scratched Kaplan, who’s still friendly with the ex-tennis player’s estranged wife, who then said in court that his entire family is terrified of Gimelstob and that he feared for his life.

The man in question, 41-year-old Gimelstob, turned himself in to the police on November 21 and was arrested on suspicion of felony battery. Those who don’t follow the sport closely are unlikely to know who Gimelstob is, but he’s a major figure in professional tennis—a rising star, you could say. After excelling at junior tennis for years, he went on win 15 pro doubles championships, two of them at Grand Slam tournaments.

Currently Gimelstob’s a top announcer for the Tennis Channel, an ATP (Association of Tennis Professionals, the governing body of the men's professional tennis circuit) board member regarded as a strong candidate for ATP president when Chris Kermode steps down. Gimelstob’s a master networker who’s has a reputation as something of an ambassador of tennis.

One of the many odd aspects of this story is how low-profile it’s been in the media. The New York Times, ESPN, and his employer, Tennis Channel, haven’t reported on the arrest. The New York Post and The Los Angeles Times covered the story, but that’s about it for American newspapers. Tennis Channel just released a statement, when asked, revealing that they’d granted Gimelstob a leave of absence and were not going to rush to judgment. It’s a big sports story, however, as the arrest poses a major threat to the meteoric career of someone who’d been heading towards becoming the most influential figure in tennis. Gimelstob’s become friends with such tennis stars as Andre Agassi, Andy Murray, Andy Roddick, Roger Federer, and Novak Djokovic. He’ll need all the friends he can get to weather this storm, because in addition to facing a felony charge, numerous incidents of bad behavior from Gimelstob’s past are now being dredged up for re-examination.

It’s been reported that Randall Kaplan’s received numerous texts, calls, and emails about previous alleged threats and assaults by the UCLA graduate.

The Telegraph has released an article, based on court documents, that allege violent acts Gimelstob’s committed against both his estranged wife, Cary Kendall Sinnott, and Sinnott’s friend Kris Thabit, who had a 2016 altercation with Gimelstob, who accused him of flirting with his wife and allegedly left him with a cut lip. Eight months later, Thabit claims, Gimelstob accosted him in a restaurant, knocked his cell phone to the ground, jumped on his back and started hitting him after Thabit bent over to pick it up. In another alleged incident that several spectators witnessed and confirmed, Gimelstob had to be restrained after putting his hand on the throat of an opponent at a paddle-tennis tournament in Los Angeles last year. The opponent had disputed a line call Gimelstob made, and that Gimelstob had said to him, “If you start something I am going to fucking finish you with my left arm, I will hit you.”

Cary Kendall Sinnott, who works as a psychologist and filed for divorce July of 2015, claims that the face of Tennis Channel first abused her in February 2015, alleging that he tackled her to the floor and pinned her there after she saw something on his phone he didn’t want her to see, according to a 22-page domestic restraining order filed in 2016 that claimed Gimelstob had “physically assaulted, harassed, verbally attacked her, stole her cell phone, and broke into her residence several times.”

Sinnott alleged that Gimelstob had assaulted her twice in front of their son. She said that he claimed to have installed surveillance equipment in her bedroom and was in possession of a videotape of her having sex with another man, and that he was threatening to show it to their son, who was born in 2013.

Gimelstob’s mouth has landed him in hot water in the past. Speaking about former WTA player Anna Kournikova during a radio interview in 2008 he said, “She has a great body but her face is a five,” and also called her a “bitch,” and said he despised her. Gimelstob described French players Tatiana Golovin and Alize Cornet as "sexpots," and said Czech player Nicole Vaidisova was a "well-developed young lady."

Pro tennis isn’t like the NFL, NBA, or MLB, where a domestic abuse allegation has immediate ramifications. This felony arrest would’ve ended his career in those leagues, but all the ATP’s done is release a statement saying they’re waiting for the legal system to make a judgment. Many within the ATP would like Gimelstob to take a leave of absence, but there’s speculation that he won’t in order not to weaken his position in court.

The incestuous ATP has a history of favoring its insiders, including burying Andre Agassi’s positive drug test—methamphetamine—back in 1997. Gimelstob has claimed he was the victim of the domestic abuse, and that he lives in fear of Sinnott and her powerful family, but that looks less credible after his arrest and reports of other violent incidents. The only prominent tennis insider to call for Gimelstob’s removal from the ATP board’s been former number one player, Australian Lleyton Hewitt. Gimelstob’s tennis player buddies are holding their tongues.

The ATP has to face the image problem posed by having a possible felon as one of its most prominent faces. I don’t see this working out for Gimelstob. His lawyers say they’ll show that he’s done nothing wrong, but in light of all the information available, this seems unlikely. He could end up doing jail time.