Michigan quarterback Denard Robinson is the most exciting player in college football, and Saturday's heart-stopping come from behind victory may have been his most virtuosic performance. 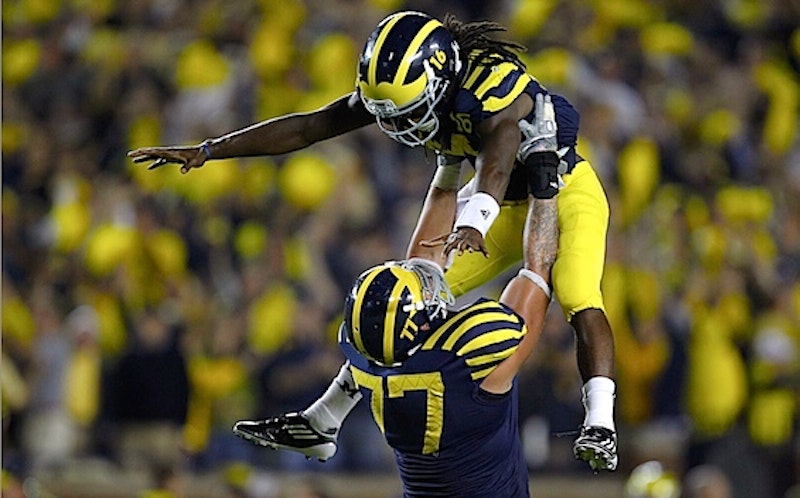 I was already planning on naming my firstborn after Michigan quarterback Denard Robinson, but now I’m starting to think QB WOLVERINES might be a better tribute to the man who keeps putting up ridiculous Tecmo level stat lines and single-handedly willing his team to victory.

The junior from Deerfield Beach, Florida made play after play in the fourth quarter of Saturday night’s thrilling comeback victory over Notre Dame, willing the Wolverines to overcome a 17-point deficit with a flurry of touchdowns and thrilling the record setting crowd of 115,000 attending Michigan Stadium’s first ever night game. My girlfriend, no stranger to either football or hyperbole, scoffed at the announcers repeated descriptions of Denard as “magical,” and “scintillating”—but after his second go-ahead touchdown pass in the last minute and 12 seconds of the game, she’d have believed it if I told her his major was Wizardry.

We’ve been here before, in fact this is the second straight match-up with Notre Dame that’s ended with a last second Denard Robinson touchdown (and the year before it was Tate Forcier who broke Irish hearts, making this the first time since 1908 Michigan has taken three in a row). Last year he eviscerated their defense to the tune of 502 yards en route to a record-breaking season, this year he only put up 446. When told his stats in the post-game interview, Denard gave the most appropriate response possible: “WHAAAAAT?!?!”

Still, after three years of heartbreak and suffering under Rich Rodriguez, Michigan fans tend towards pessimism. Despite delivering the Wolverines their most dynamic and exciting player since 1997 Heisman winner Charles Woodson, Rodriguez was fired for “not getting it,” in addition to sporting the worst defense in Wolverine history. New coach Brady Hoke, whose resume was much, much less impressive than Rodriguez’s was when he was hired, has won over the media and fans for being a Michigan man, but I worry that while he might understand tradition, toughness, defense and all that, he might also change the one thing about Michigan football that worked—the offense.

Rich Rodriguez is now a TV analyst, and someone asked him how to stop Denard Robinson. His response: “Put him under center.” Transitioning back to UM’s classic “three yards and a cloud of dust” offense has been a stated goal of Hoke’s, though so far the talk about bringing a power, pro-style offense back to Michigan has been just that, talk. About 75 percent of the snaps this year have been out of the shotgun, where Denard is clearly more comfortable. Denard isn’t a pocket passer, and while he has a strong arm, accuracy isn’t a strong suit. Putting him in the gun creates an enormous amount of pressure on the defense to constantly defend the threat of a rush, effectively making every single snap play-action and often resulting in wide open receivers or holes you could drive a truck through.

Through the first three quarters of the Notre Dame game, the Michigan offense looked completely lost. They had three first downs in the first half, Denard looked uncomfortable and the rhythm was more off than a stoned high school reggae band. It wasn’t until offensive coordinator Al Borges dropped the pro-style pretense that the Wolverines started to move the ball down the field.

Much has been made about the wear and tear on Denard’s body from rushing the ball 20 times a game, but when your running backs combine for 10 (!) yards, what are you supposed to do? More over, what are we saving him for?

Denard is a once in a lifetime talent and after he graduates, Michigan is unlikely to ever recruit another quarterback like him. It’d be a shame not to put him in the system that maximizes his talents, and I think Hoke knows that, wants to win, and is talking up “manball” because he knows the rhetoric plays to the blue hairs.