Oscar Pistorius Has No Place at the Olympics

The man’s story is compelling, but he’s not an able-bodied athlete 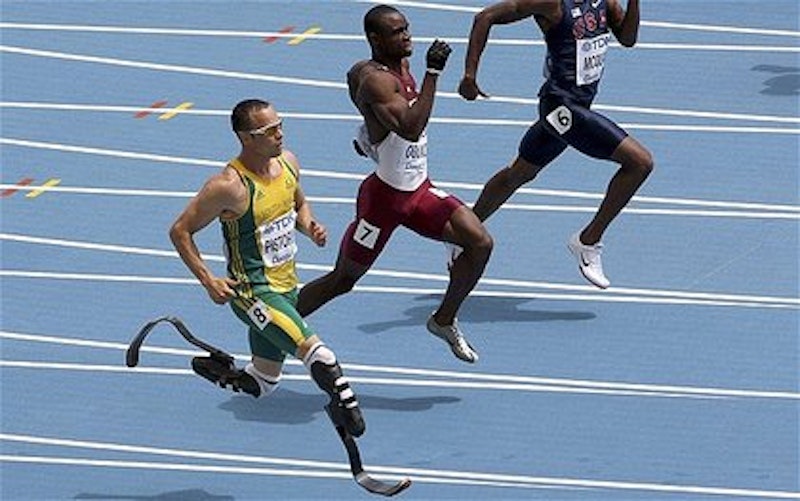 First man to the finish line wins. This simple and pure law has been the guiding rule of the footrace as long as we can remember, from childhood sprints to the end of the street to the Olympic track. In the age of technology, however, one man has caused us to question this, not in the terms of the rules of the competition, but in the definition of the "man."

Oscar Pistorius has caused a stir within the Olympic community during the 2012 Games by becoming the first disabled Olympian to compete in both the Paralympics and the Olympics in the same year. With both of his legs amputated below the knee before his first birthday, Pistorius, nicknamed "The Blade Runner" by the media, has been able to compete against able-bodied athletes on the Olympic stage with the assistance of the Cheetah Flex-Foot carbon fibre transtibial limbs, two claw-like appendages that attach to his thighs. These artificial appendages provide a springing reflex which mimics that of the calf and foot, and in the case of Pistorius, allow an individual who would otherwise be bound to a wheelchair or crutches sprint across a track and join the ranks of world athletes.

These carbon fibre blades have allowed Pistorius to follow his dream of becoming an Olympic athlete, yet they have also plagued his professional career since it began. Pistorius first came under controversy when competing to qualify for the 2008 Olympics in Beijing. In 2007, Pistorius participated in a two-day study at Cologne Sports University to test his eligibility to compete in accordance with Olympic ethical standards. The testing found that his artificial limbs used 25 percent less energy than runners with natural legs and that they led to less vertical motion and less mechanical work for lifting the body. The chief researcher of the study, a professor by the name of Peter Brüggemann, reported these results in Die Welt, a German daily newspaper, claiming that Pistorius "has considerable advantages over athletes without prosthetic limbs who were tested by us. It was more than just a few percentage points."

Citing this study as evidence, the International Association of Athletics Federations (IAAF), the global governing body for track and field events, banned the use of "any technical device that incorporates springs, wheels or any other element that provides a user with an advantage over another athlete not using such a device," which eliminated Pistorius from Olympic eligibility.

Pistorius vowed to fight on and brought the case to the Court of Arbitration for Sport in Lausanne, Switzerland, resulting in a two-day hearing in May of 2008 that effectively unearthed flaws in the Brüggemann's methodology. Pistorius' biomechanics while using the Flex-Foot technology had only been tested at full-speed when running in a straight line, a test that did not accurately reflect the acceleration, deceleration, or turns of a 400-meter race and did not consider other disadvantages the athlete faced at the start and acceleration phases of a race, like starting at a vertical position, making him slower off the blocks and more affected by wind resistance. The appeal resulted in a revocation of the IAAF decision, which allowed Pistorius to compete in Beijing qualifying races, in which he unfortunately fell short.

The controversy that surrounded Pistorius' battle to the Olympic track loomed over him during his competition in the London Games. While many athletes heralded him as a role model and inspirational figure, other questioned the ethics surrounding his presence on the track. The underlying question became how one actually defines Pistorius: as an athlete overcoming an obstacle or an athlete using an unfair advantage to compete.

Although there is to this day no other athlete that directly compares to Pistorius' example, there are two notable precedents to his story. In the 1984 Olympics in Los Angeles, a paraplegic wheelchair-bound archer named Neroli Fairhall competed for New Zealand and despite only finishing in 35th place, her disability led many to question whether she had an unfair advantage due to the increased stability provided by her chair as opposed to traditional upright archers.

A more direct comparison, though not an Olympic story, is Rohan Murphy, a legless wrestler who overcame his disability to become a star wrestler at one of the most competitive wrestling high schools in the country, East Islip (NY), eventually earning him a spot on the powerhouse Penn State varsity team. Although not aided by technology or prostheses, some could argue that Murphy had an advantage in his matches due to his ability to wrestle at lower weights, his low position on the mat which gave him an easier attack to opponents legs, and the fact that his lack of legs eliminated an entire suite of the most common takedown techniques in wrestling.

The controversy surrounding Pistorius, however, is rooted in the growing synthesis between sports and technology. Resisted by some but embraced by many more, technology has slowly become integrated into sports that have existed for centuries and has subsequently changed the way the games are played. Instant replay in baseball and football and computerized tracking in tennis have muted the effects of human error on the part of referees and officials. LZR Racer swimsuits made of specially-bonded seams and water-repellent fabric allows swimmers to swim faster by decreasing water resistance. New bats allow baseball players to hit the ball farther, fiberglass composite poles allow field athletes to vault higher, and specialized composite bows made of aluminum, magnesium fiberglass, and Kevlar allow archers to release shots at speeds exceeding 150 miles per hour with pinpoint accuracy. Anabolic steroids allow athletes to transform themselves into faster and stronger machines.

What separates these developments from the Pistorius case is the baseline of the human athlete. The technologies mentioned, whether legal or not, are available to all who perform. The "baseline athlete" is defined as someone with functional arms, torso, head, and legs, and any legal enhancement to that individual is accepted because equal opportunity exists for all athletes to utilize it.

There is no baseline for Oscar Pistorius. The back-and-forth trials and tests surrounding his eligibility did nothing more than prove that there is no sufficient evidence available to determine whether or not he has an advantage. One could argue that his lack of legs represents the ultimate disadvantage. One could also argue that spring-loaded mechanisms designed by top engineers provide a pretty distinct advantage. Pistorius' disadvantage in terms of starting from the block has been made clear, but any advantages he may have remain in the ether. As of yet, there is no way to tell how fast Pistorius would be if he had legs, just as there is no way to tell how fast Usain Bolt would be if he had Cheetah Flex-Feet.

However, when Oscar Pistorius steps up to the blocks, there is a significant distinction between him and the other racers. He is not the same type of athlete. Sprinting requires the synthesis of gluteal muscles, hamstrings, hip flexors, and calves, and for Pistorius, one of these muscle groups is engineered by scientists. The difference isn't nearly as stark as dropping a Formula One car in a cycling race, but he is essentially a different vehicle than his competitors, and while his story is no less inspirational because of this, it ought to preclude him from competing in the Olympics in the future. His venue of competition should be the Paralympics, and as disheartening as this may be to say, despite technological advances, Pistorius' disability effectively prevents him from ever competing with able-bodied athletes without leaving his athletic career perpetually in question and controversy.