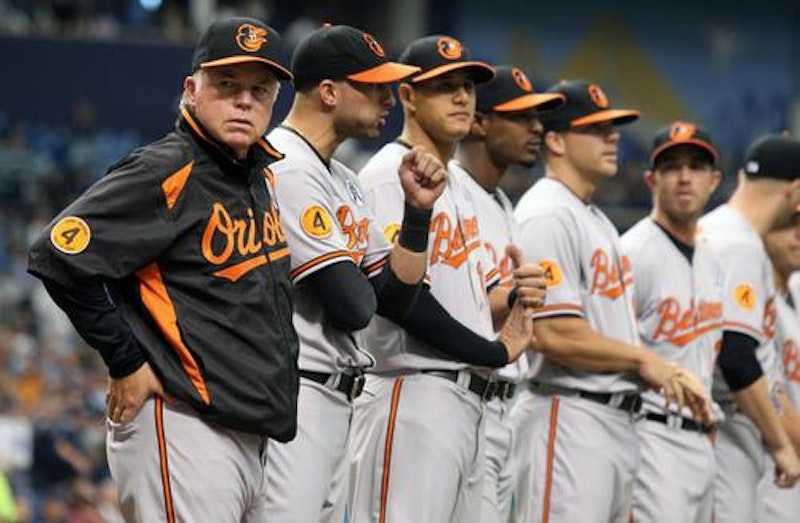 The Baltimore Orioles’ success in 2012 was labeled as lucky, a fluke, or unsustainable by most media outlets. The O’s are off to a great start to the 2013 season despite a grueling April schedule and a revolving door at the back end of the rotation. It’s time to recognize that Buck Showalter’s club may just be pretty damned good.

The Orioles didn’t look so lucky when the 2013 schedule was released. Baltimore started the season with nine of its first 12 games on the road, including trips to division rivals Boston, Tampa Bay, and New York. After a 10-game homestand the Birds hit the road again for an 11-game/11-day trip to Oakland, Seattle, and Anaheim. Baltimore went 7-4 on the extended West Coast swing thanks in large part to the daily heroics of Manny Machado. The Orioles are at 20-13 after defeating the Kansas City Royals last night in just their third homestand of the season. Baltimore has played a league-high 20 road games and have gone 12-8 in those contests. Showalter’s club is just 8-5 at home but will look to improve upon that record with 12 of their next 15 games to be played at Camden Yards.

Baltimore has already used four pitchers in the fifth starter slot with veteran re-tread Freddy Garcia the latest to take a turn. Garcia’s uplifting debut last Saturday followed unimpressive performances from Jake Arietta, Zach Britton, and Josh Stinson. The 36-year-old Garcia is likely just holding a spot for rookie Steve Johnson, currently on a minor league rehab assignment, or 2012 first round pick Kevin Gausman. If they can find an adequate fifth starter Orioles could be poised to take over the division lead as the early season scheduling inequities level out.

The Rays are off to a disappointing start this season but it should be noted that they have played 18 of their first 31 games on the road. Tampa Bay has gone just 6-12 on the road in 2013 but is 8-6 at home. The Rays went 44-37 in road games last season. The Rays are currently 6 ½ games behind the division leading Red Sox but could get right back in the race as their schedule evens out. The bigger questions for the Rays will be the performance of David Price (6.25 ERA in seven starts) and the arrival date of top prospect Wil Myers.

The Red Sox have been riding high atop the division due to the resurgence of Clay Buchholz, accompanied by his questionable new repertoire, and a schedule heavy on home games and light on tough opponents. Boston has played 18 of its first 32 games in the friendly confines of Fenway Park. The Sox have also put a beating on the dregs of the American League amassing 9-3 record in games against Toronto, Houston, and Minnesota. The Red Sox are just 1-5 this season against Texas and Baltimore.

The Yankees have been one of baseball’s biggest surprises of 2013. New York sits just two games back of Boston in the AL East standings despite injuries to Derek Jeter, A-Rod, Curtis Granderson and Mark Teixeira. The Yankees have received unlikely contributions from former star players like Vernon Wells, Travis Hafner, and Lyle Overbay. The Yankees have also benefitted greatly from a schedule top heavy with home games. New York has gone 12-7 at Yankee Stadium compared to 6-6 on the road. The Yankees began an eight-game road trip to Colorado, Cleveland, and Kansas City last night that could answer some questions about their legitimacy.

The Blue Jays have been baseball’s biggest disappointment. The Jays have struggled on the mound despite a pitching staff that was completely overhauled last winter. Toronto can’t even blame its early season struggles on the schedule maker. The Jays have played a league-high 19 home games and have gone just 7-12 at the Rogers Centre. Things may soon go from bad to worse for the Jays who play nine of their next 11 games on the road.