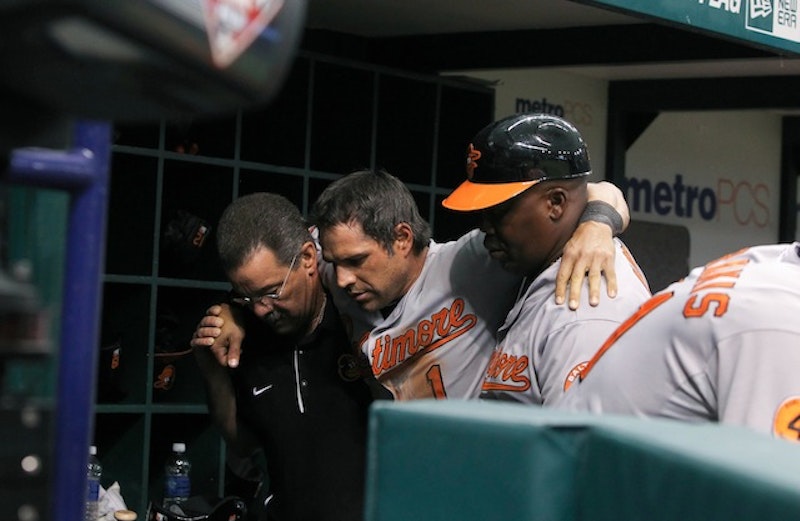 The never-ending string of injuries to Baltimore Orioles’ second baseman Brian Roberts has been well documented. Roberts’ latest setback—he had hamstring surgery on Thursday—and the offensive struggles of replacement Ryan Flaherty have once again left Baltimore in search of a keystone partner for J.J. Hardy. The resurgence of Chase Utley, coupled with the Phillies’ crummy start, has led to some rumors that the free-agent-to-be could be headed to Baltimore. Don’t bet on it.

At face value the Utley to the Orioles rumor has some merit. The O’s clearly have a need and the Phillies need all the young talent they can get to supplement their bloated payroll. Utley is posting solid offensive numbers in 2013 after missing extensive time to injury over the past three seasons. Sound familiar O’s fans?

Utley’s .828 OPS and .506 slugging percentage would be a massive upgrade over the combination of Flaherty and Alexi Casilla. The problem is that Utley’s recent injury history is only slightly less gruesome than Roberts’. The Orioles are paying Roberts $10 million for the 2013 season. Utley is in the final year of a long-term contract that pays him $15 million this season. Even if the Orioles overlooked Utley’s injury troubles, and waited until the July 31 non-waiver trade deadline to make a deal, they’d still be on the hook for nearly $5 million of Utley’s contract. In that scenario the second base combination of Roberts and Utley would cost the Orioles in the neighborhood of $15 million for 2013.

If Utley’s own injury woes and hefty price tag aren’t enough to scare off the Orioles then his no-trade clause and looming 10-and-5 status should be. Utley can block a trade to 21 teams and will likely be given special consideration to choose his preferred trade destination by the Philadelphia front office. The more likely scenario may be for Utley to play out his deal with the Phillies before re-signing in the offseason after agreeing to move to third base.

If Utley isn’t the elixir for Baltimore’s second base woes then who is? There’s no simple or attractive solution. Roberts’ expensive salary didn’t allow the Orioles the type of payroll flexibility required to obtain a qualified second baseman in the offseason. Flaherty inherited the position by default when Roberts went down with a hamstring injury in the third game of the season. The 26-year-old Flaherty has emerged as a popular whipping boy for O’s fans but in fairness he’s a former Rule 5 draft pick who has just 211 Triple-A at bats. Flaherty’s .122 batting average, along with Nolan Reimold’s lack of production, has left a major void at the bottom of the Orioles’ batting order. Flaherty has played solid defense but he may not have the bat for anything more than a utility role.

If Flaherty continues to flag at the plate he could give way to Triple-A second baseman Yamaico Navarro or top prospect Jonathan Schoop. Navarro hasn’t enjoyed much success in his brief big league trials but he is just 25 and has posted a career .832 OPS in 171 games at Triple-A. Schoop delivered some big hits for the Netherlands during the World Baseball Classic and has rebounded from a slow start at Triple-A Norfolk. The 21-year-old Schoop is generally regarded as Roberts’ heir apparent at second in Baltimore. He struggled at the plate in April but is hitting .293 over the past 10 games for the Norfolk Tides.

The Orioles’ second base struggles aren’t the least bit surprising. If not for his contract, Roberts would have been released long ago. Schoop has promise but he’ll need more than a mildly successful week in Norfolk to get the call to the show. Chase Utley is a pipe dream with a price tag sure to scare off Peter Angelos. It’s not going to make many O’s fans happy but for the time being the defense first platoon of Flaherty and Casilla is the Birds’ best option.