It’s Hammel Time for the O’s. 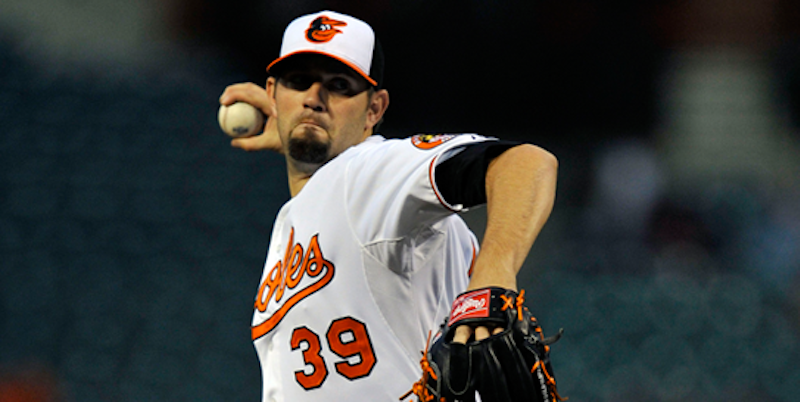 Over the past 12 months the Baltimore Orioles have morphed from a Cinderella story riding a wave of good luck to a legitimate contender with a lineup of young stars. While Chris Davis, Adam Jones, and Manny Machado have powered the Orioles, the team’s most important player might be pitcher Jason Hammel. With Wei-Yin Chen and Miguel Gonzalez on the DL, and the fifth spot in the rotation a smoldering dumpster fire, Hammel needs to re-kindle some of his 2012 magic.

Baltimore acquired Hammel from the Colorado Rockies prior to the start of the 2012 season. He’d started out in the big leagues as one of the Tampa Bay Rays’ top prospects but was relegated to the bullpen after three lackluster seasons in Denver. Hammel’s arrival in Baltimore was met with skepticism but he posted the best season of his career for the Orioles. Hammel went 8-6 with a 3.43 ERA and 1.24 WHIP in 20 starts for the O’s last season. He set career highs in WHIP and strikeout per nine innings and capped off the season by striking out 11 and allowing just four runs in two postseason starts.

The hope was that Hammel had finally figured it out and would have another stellar campaign in 2013. But the first quarter of the 2013 season has only given fuel to the fire of Hammel’s doubters. The big right-hander has pitched more the like the guy that was dumped in the Rockies’ bullpen than the guy who started Game One of the 2012 ALDS against the Yankees.

Hammel is 5-1 on the season but his record is largely the function of the O’s emerging offensive firepower. The Birds have scored a staggering 56 runs in Hammel’s eight starts this season. Hammel’s current 4.93 ERA is in line with his career mark of 4.78. He’s also reverted back to pre-2012 form when it comes to WHIP, hits per nine innings, and strikeouts per nine innings. Hammel isn’t missing as many bats as he did last season and that’s a problem.

Hammel’s early season warts were easy to mask behind the surging offense, emergence of Chris Tillman, and stellar pitching of Wei-Yin Chen. Last week within the span of three days Hammel was rocked for six runs in four innings against the Twins and Chen was lost for several weeks to an oblique strain. All of a sudden Hammel’s flaws were exposed. When Hammel takes the mound against Tampa on Friday night he’ll do so with the chance to once again silence his critics and establish himself as a dependable innings eater for a contending ballclub. As a free agent after the season Hammel has added motivation to author a strong finish to 2013.

Hammel isn’t the biggest problem on the Baltimore pitching staff but he’s been the most disappointing. The loss of Chen prompted the recall of former Braves’ pitcher Jair Jurrjens from Triple-A Norfolk. Jurrjens has pitched well for Norfolk after a disastrous 2012 season and will take the hill Saturday. He’ll be given every chance to earn a full-time rotation spot. The Orioles are currently employing veteran righty Freddy Garcia as the fifth starter after Jake Arrieta, Josh Stinson, Zach Britton, and Steve Johnson flubbed their chances. Garcia’s outings have ranged from so-so to awful. Another clunker like Wednesday’s start against the Padres and Garcia could be on his way out. The Orioles’ rotation is in turmoil as fans clamor for the promotion of top prospect Kevin Gausman and anxiously await the return of Chen and Gonzalez. Buck Showalter’s crew is counting on Hammel to shake off his early season struggles and re-establish himself at the front of this ever-changing rotation.