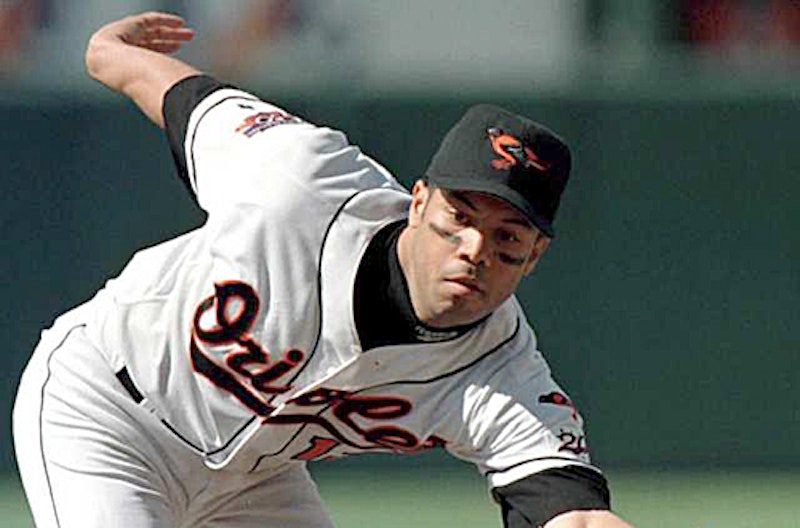 The Baltimore Orioles announced on Wednesday that former second baseman Roberto Alomar had been elected to the team’s Hall of Fame. Alomar experienced incredible highs and one deplorable low during his three-year tenure in Baltimore. His induction will give Orioles fans the chance to honor and remember him for his on-field contributions and stellar play.

Alomar is one of the five best players I’ve ever seen. He could single-handedly tilt the balance of a baseball game with his switch-hitting abilities, adept base-running, and jaw dropping defensive acrobatics. If Alomar didn’t beat you by driving balls into the gaps and over walls he’d work a walk or infield single and drive the pitcher crazy as he danced off first base. When Alomar slumped at the plate his defense never failed to deliver. No second baseman went to their left like Alomar, who routinely turned would-be singles into almost routine outs as he tossed to first base from his knees in shallow right field. I’ve paid admission just to see Alomar play baseball.

On a side note Alomar is credited with a negative dWAR (defensive Wins above Replacement) in eight of his big league seasons. This means that according to the calculation used for dWAR Alomar was a subpar defender for most of his career. The validity of defensive metrics is iffy at best, and in the case of Alomar dWAR may be completely worthless. Any statistic that tells us that Robbie Alomar was subpar needs some serious revision. I’ll trust my eyes and 30 years of watching baseball in this case.

Though Alomar played just three seasons in Baltimore he was the catalyst on back-to-back playoff teams in 1996 and 1997 and more often than not the best player on the field. Unfortunately, Alomar may be best remembered, by many Baltimoreans and casual baseball fans, for the ugly incident between him and umpire John Hirschbeck that occurred late in the 1996 season. In a September game in Toronto Alomar got into an argument with Hirschbeck over balls and strikes. The argument took a turn for the worse when Alomar spit in the face of the umpire. Alomar later apologized, after first making insensitive comments regarding Hirschbeck's deceased son, and the umpire has seemingly buried the hatchet.

Alomar can't undo the events of that September night, but he has paid a price. He served a suspension, donated money to charity, and missed out on being a first ballot Hall of Famer when baseball writers imposed their own penalty. The time for celebrating Alomar the player has arrived. His induction into the Orioles' Hall of Fame is just the latest honor in a career that included 10 Gold Gloves, 12 All-Star games, two World Series rings and enshrinement in Cooperstown.

Alomar's inclusion in the Orioles' Hall of Fame comes a year after the induction of Mike Mussina, another O’s lightning rod. While Alomar's transgression was despicable Mussina's departure for a free agent deal with the Yankees was high treason. The benefit of hindsight, and John Feinstein's excellent book Living on the Black which covered the latter years of the careers of Mussina and Tom Glavine, leaves me with the conclusion that Mussina's departure could have been easily avoided with just a bit of effort from owner Peter Angelos. Most of my ire has shifted from Mussina to Angelos, but it was never really acceptable to see Mussina in pinstripes. Mussina and Alomar belong in the Orioles HOF, though the franchise would have been much better off if they had played more seasons in Baltimore.

The next issue for the Orioles’ Hall of Fame will be Rafael Palmeiro. The first baseman had five monster seasons in Baltimore from 1994 to 1998 and ranks among the franchise leaders in home runs (223) and RBI (701). Palmeiro’s place in baseball history has been marred by his positive test for a banned substance in the summer of 2005. He served his MLB imposed 10-game suspension but will likely never make it to Cooperstown. My guess is he’ll also never receive his rightful honor from the Orioles. A baseball Hall of Fame, or Orioles’ Hall of Fame, without Raffy Palmeiro fails to tell the entire history of the game and one of its great franchises.