Mediocre is the best Pat Riley can hope for. 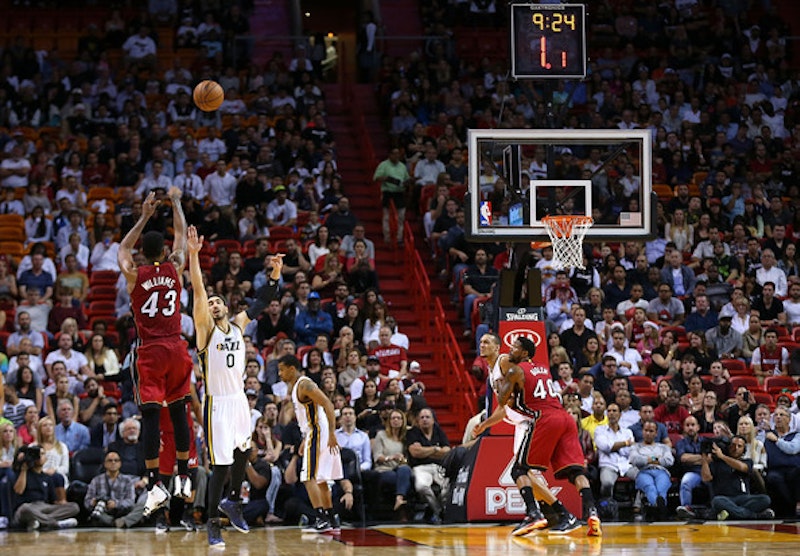 After going 32-9 at home last season Miami has already dropped 12 of its first 19 home games this year including losses to the barely-trying Utah Jazz and the tanking Philadelphia 76ers. The Heat had a six-game homestand over the holidays that looked like a make-or-break stretch. They broke. Other than the Christmas day dethroning of James and his Cavaliers the homestand was a bust.

The departure of James dropped the Heat from the ranks of the Eastern Conference elite but the return of Bosh and the additions of Luol Deng and Josh McRoberts looked like a decent save by Pat Riley. Now with 36 games of hindsight both newcomers have failed to make a significant impact. Deng’s been solid, and generally healthy, but his scoring and rebounding is down over his career averages. McRoberts is a disaster. Check that: “was” a disaster as he’s now sidelined with a season-ending knee injury. After starting the season slowly due to a training camp toe injury McRoberts finally seemed ready to make a positive contribution. He played sparingly in November with the thinking that Spoelstra would ramp up the big man’s minutes as the season progressed. He finally regained his starting role in early December only to suffer a knee injury that ended his season and wreaked havoc on Spoelstra’s rotation. The minutes planned to go to McRoberts will be shared by the Birdman, the ancient Udonis Haslem and former D-leaguer Justin Hamilton. None of them offer McRoberts’ passing talents or ability to stretch the floor from the power forward position.

McRoberts isn’t the only Miami player to be hobbled early in the season. Bosh missed eight games with a calf strain. Wade missed seven games in November related to his lingering knee troubles. The December loss to the Jazz had to bring back bad memories for Wade as he scored 42 points in a blowout defeat. It was shades of the pre-Big Three days for the noted Heat lifer and an unenviable position for both the player and the franchise.

Riley and Spoelstra no doubt hoped that they could cobble together a playoff team to lessen the sting of losing James to Cleveland. Injury and ineffectiveness have ruined those plans. The team ranks nears the bottom of the league in scoring, rebounding, and points allowed. In short, the Heat sucks. The team is currently clinging to the eighth seed in the Eastern Conference but a tough stretch of upcoming games (Clippers, Thunder, Warriors, Kings) could have Miami closer to the Knicks than the playoffs by the end of the month.

The team has few bright spots: the increased offense of Bosh and the recent emergence of D-League refugee Hassan Whiteside about the only things to generate any excitement. Whiteside has been terrific... for a week. The 25-year-old has posted three straight games of double digit points, and looks like he has a future as a rebounder and shot blocker. At best he’s a solid big man prospect, at worst he’s a reason to tune in for the next couple of weeks before the league catches up. Shabazz Napier, the point guard selected in the first round, presumably as a gesture to LeBron, has disappointed. The former UConn star has shuttled between Miami and Sioux City. It’s clear that Mario Chalmers and Norris Cole aren’t long-term solutions at the point. Spoelstra may soon just decide to ride or die with Napier for an extended period to see if he can be an asset.

Miami’s injuries, short bench, and insufficient point guard play has derailed the plan to bridge the gap between LeBron’s departure and the summer of 2016. The hope was that the team could remain competitive for two seasons before going balls to the wall to lure a top-flight free agent to South Beach in 2016. Wade and Deng are both on two-year deals and trade rumors are already swirling around Deng. Pat Riley no doubt despises the notion of rebuilding, especially in the weakened Eastern conference, but at this point a spin in the NBA lottery may be Miami’s best bet. If the Heat finishes outside the Top 10 of the draft its 2015 first rounder goes to Philadelphia. Mediocre is the last thing anyone wants to be in today’s NBA where stars and lottery picks are the most important currency. Right now the Heat are mediocre and it’s getting them nowhere.