Why didn’t he wait for Atlanta? 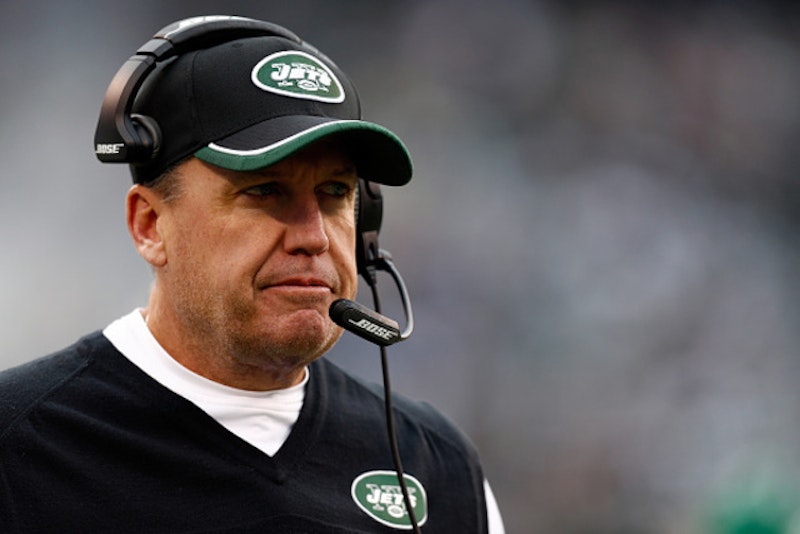 Rex Ryan was fired by the New York Jets shortly after the conclusion of New York’s predictably disappointing 2014 season. The Jets courted disaster with the Geno Smith/Michael Vick quarterback carousel and no one batted an eye when it all went to crap. Ryan’s ouster was as much the result of his own bombast as it was the team’s quarterback issues. Ryan’s dismissal was perfectly timed with the open head coaching positions in Atlanta and San Francisco. After suffering through six years of Mark Sanchez, Smith and Vick under center Ryan was finally poised to take his brand of defensive chaos to a team with an established quarterback.

Before Ryan could fulfill his destiny at the helm of the Atlanta Falcons, where he and QB Matt Ryan would team up to reign over the NFC South, he made the head-scratching decision to become head coach of the Buffalo Bills. In choosing Buffalo before the Falcons’ situation became settled, Ryan finds himself in an eerily familiar position. After a week of freedom, Ryan hastily exercised his right to return to the shadow of Bill Belichick. The only difference between the Jets and Bills is the size of the media market and the bleakness of the quarterback spot. Where the Jets gave Ryan the ability to pick his poison (Smith or Vick) Buffalo offers no such luxury. It’s E.J. Manuel or bust for the Bills.

The Bills ownership is only slightly more settled than the quarterback spot. When franchise patriarch Ralph Wilson died last year, the team was sold to local Buffalo businessman, and owner of the NHL Sabres, Terry Pegula. The Sabres haven’t thrived since Pegula purchased the franchise in 2011. The team missed the playoffs in each of the last three seasons, and currently hold sole possession of last place in the Eastern Conference. Pegula is hoping that Ryan can deliver the Bills a postseason berth for the first time since 1999, and the first of his personal sports ownership career.

The hiring of Ryan makes perfect sense for Buffalo. Ryan has built up a tremendous reserve of AFC East knowledge over the past six seasons. He’s not intimidated by the success of the New England Patriots, players love playing for him (a potentially huge factor in luring players to Buffalo’s great white North), and the Bills have the dynamic players on defense to get Ryan’s creative juices flowing. Even if Ryan can’t deliver a winner to Buffalo, he’ll certainly spice up the autumns and bring some national attention to a team that has been an afterthought for over a decade.

In going to Buffalo Rex Ryan has taken a leap of faith with an ownership and quarterback unworthy of that trust. The most successful NFL franchises typically have two common attributes: an established principal owner committed to winning and a quarterback who’s able to deliver in critical moments. New England, Baltimore, Green Bay, Pittsburgh, Denver, and even Seattle and Indianapolis fit that bill. Atlanta offered Ryan the chance to work for Arthur Blank and with QB Matt Ryan. Blank’s been a stable force for the Falcons. The struggles of 2014 notwithstanding, Atlanta’s a perennial contender since Blank purchased the team in 2002. Matt Ryan would’ve been the best quarterback Ryan ever coached. According to reports, Rex Ryan was anxious to make a decision while the Falcons wanted to take their time with the hiring process. Ryan jumped for a bad job in Buffalo.