Here’s looking at you, B.J. Upton. 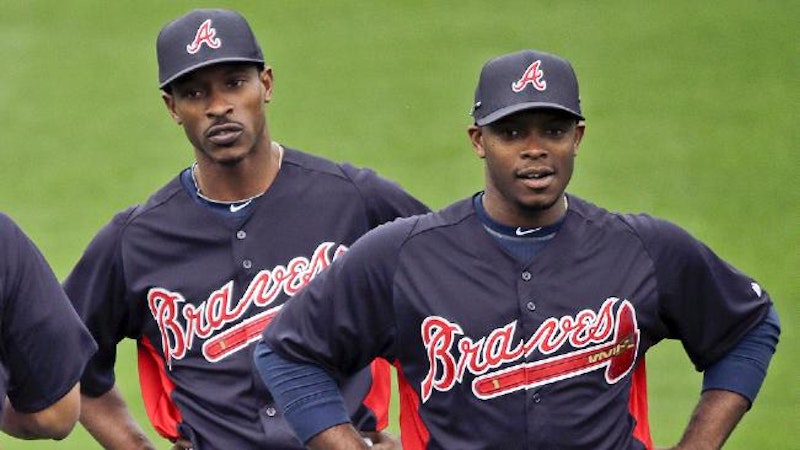 Josh Hamilton and Zach Greinke were the big-ticket items at baseball’s Winter Meetings back in December. The pair of All-Stars ended up signing contracts that totaled in excess of $260 million with the Angels and Dodgers. Those franchises have been two of baseball’s biggest disappointments this year, thanks in large part to the slow starts of Hamilton (.622 OPS) and Greinke (missed a month due to injury). Unfortunately for some clubs the free agent flops extend well beyond California.

The Braves took dead aim at the Washington Nationals in the off-season when they added a pair of athletic, young outfielders to the lineup in the Upton brothers. While Justin Upton, acquired in a trade from Arizona, has emerged as a devastating power hitter (14 home runs in 2013) his brother B.J. has struggled to adjust to the National League. Atlanta signed B.J. to a five-year $75 million contract to play center field and presumably hit at the top of the lineup. The contract was questionable, as Upton’s ability to get on base has been decreasing since his career-high .383 on base percentage in 2008. After posting a career low .298 OBP and a career high 28 home runs for Tampa in 2013, the Braves seemed to be banking on B.J.’s future as a power hitter. As we sit just a few days before Memorial Day weekend B.J. isn’t getting on base (.237 OBP) or hitting for power (.239 slugging %).

The Nationals countered Atlanta’s Upton hoarding by re-signing first baseman Adam LaRoche. The 33-year-old LaRoche had a career year for the Nats in 2012 and attracted little attention on the free agent market. Washington chose to re-sign LaRoche to a two-year $24 million contract rather than hand the first base job over to Michael Morse or youngster Tyler Moore. LaRoche is hitting just .229 with a .710 OPS on the season, both stats buoyed by a recent hot streak. LaRoche finally showed some signs of life as he blasted four home runs during last week’s West Coast swing.

After essentially sitting out free agency in his first off-season as Cubs’ President of Baseball Ops Theo Epstein threw some cash around this past winter. Epstein was close to signing Anibal Sanchez to a contract that reportedly would have exceeded $80 million. When Sanchez chose to stay with the Tigers the Cubs countered by signing baseball vagabond Edwin Jackson to a four-year $52 million deal. Jackson’s frustratingly tantalizing combination of great stuff and control issues has led him to play for eight big league teams before his 30th birthday. He’s posted a record of 1-6 with a 5.76 ERA in his first nine starts for Chicago. Looks like Theo should have saved his money.

Epstein also signed Nate Schierholtz and Scott Hairston to platoon in right field. Schierholtz has held up his end of the bargain playing sparking defense and contributing five long balls and a .841 OPS. But after slugging 20 home runs for the Mets in part-time role last season Hairston has just six hits and seven RBI in 49 at bats with the Cubs. In fairness to Epstein the club seems to have struck gold with its one-year deal for Scott Feldman. After losing his rotation spot in Texas last year Feldman has posted four wins and a 2.19 ERA in eight starts. He looks to be a prime candidate to be traded prior to the July 31st non-waiver deadline.

Joe Saunders emerged as an unlikely postseason hero for the Baltimore Orioles last October. After coming to the O’s in a late August trade with Arizona the lefty out-dueled Yu Darvish in the American League’s first Wild Card one-game playoff. Saunders hit free agency after the World Series and eventually landed with the Mariners. Dan Duquette was criticized for not retaining Saunders during the off-season, but his decision appears justified. While the Orioles have cycled through a dizzying number of underperforming fifth starters, Saunders has been lit up in Seattle. Saunders has pitched to a 5.64 ERA and allowed 65 hits in 52 2/3 innings with the M’s. The O’s desperately need to find another dependable arm but no one should be looking at Saunders as the one that got away.