Skip the comparisons to Trout & Harper. 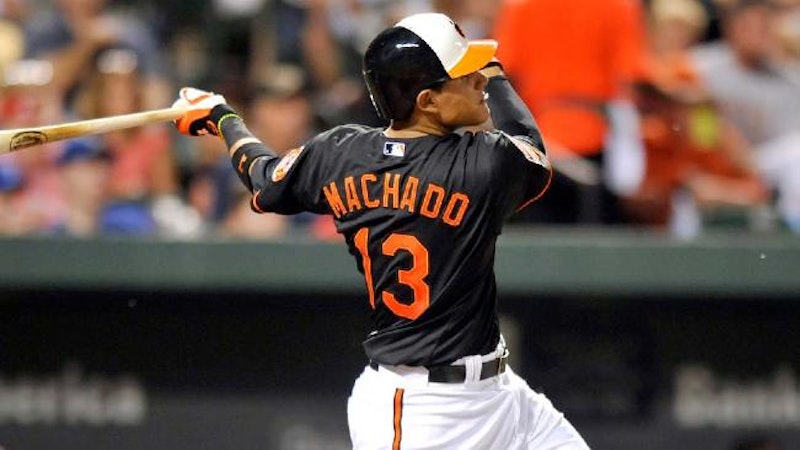 The anticipated correction that many predicted for the 2013 Orioles has yet to arrive. As the Major League Baseball season winds towards Memorial Day weekend the Birds of Baltimore are once again flying high in the American League East. Despite a tattered starting rotation and non-existent production from second base and designated hitter the Orioles are just 1.5 games behind the Yankees for the top spot in the division. The emergence of Manny Machado and Chris Davis as All-Star level players, coupled with the continued offensive maturation of Adam Jones, has kept the Orioles near the top of the AL standings.

Davis got off to a scorching start and has only slowed down slightly since the season’s first few weeks. The 27-year-old first baseman is having the best season of his career and currently leads the league in home runs, slugging, and OPS. Davis has also clubbed 14 doubles and played more than respectable defense at first base. While Davis has garnered attention for his rainmaking long balls it’s his counterpart at the hot corner who is drawing major media attention.

The Orioles recalled Manny Machado from Double-A Bowie early last August to play third base. After having to stomach the defensive miscues of Mark Reynolds and Wilson Betemit the O’s hoped that Machado would be an adequate defender with a plus bat. Machado exceeded offensive expectations and the converted shortstop quickly impressed onlookers with his range, arm, and awareness around third base. Hopes were high for the 20-year-old Machado entering the 2013 season but thus far he has far exceeded any realistic expectations.

Machado, a doubles machine, currently leads the American League in hits and WAR (2.6). He’s accounted for a staggering 4.2 WAR in his first 91 big league games. By comparison 2012 NL MVP Buster Posey accounted for 7.4 WAR in 148 games last season. As Machado fills out his lanky 6’2” 180 lb. frame those doubles could soon find the seats. Anyone who has watched Machado for more than a few games is aware that he is already among the best defensive third sackers in the game. There may not be anyone better at charging a slow roller on the infield grass than the O’s phenom. The youngster’s surprising offensive outburst has led some major media outlets to compare him to the darlings of 2012: Mike Trout and Bryce Harper.

I’m not interested in comparisons. Machado is a much different player than either Trout or Harper. His ability to dazzle defensively at a premium position makes him invaluable to the Orioles. Baltimore fans wouldn’t trade him for anyone. Even my three-year-old daughter is a big Manny fan as she always asks to watch his highlights on the MLB At Bat app before bedtime. His torrid hitting streak of the past few weeks is likely to cool off at some point, but Machado’s daily exploits make him the most exciting Orioles’ player since Robbie Alomar in 1996. When Machado moves to shortstop in a few seasons he may be headed for superstardom. He may not win the batting title this year, or even lead the O’s back to the postseason, but he will be an Oriole for a long time and that’s an exciting notion for long-suffering O’s fans.