GM Theo Epstein’s fixer-upper has a long way to go. 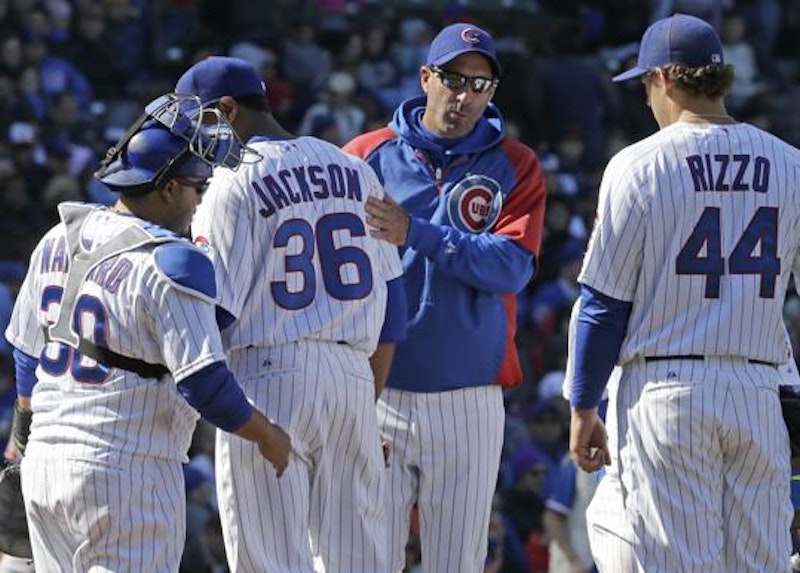 The Chicago Cubs have, not surprisingly, hovered at or near the bottom of the National Central Division for most of the 2013 season. The Cubs’ current record is 18-27 despite a run differential of -5 on the season. The team’s woeful bullpen has made a habit of stealing defeat from the jaws of victory. But there are some bright spots for the rebuilding Cubs.

Any news involving Anthony Rizzo is positive these days in Wrigleyville. The 23-year-old first baseman has rebounded from a slow start to lead the team in home runs and RBI. Rizzo also recently inked a seven-year contract extension worth in excess of $40 million. The deal gives Rizzo some financial security and marries the Cubs to one of baseball’s rising power hitters at a more than reasonable rate.
Chicago signed four starting pitchers (Scott Feldman, Edwin Jackson, Scott Baker, and Carlos Villanueva) during the off-season to bolster the rotation. While the overall results have been mixed, Feldman has been a revelation. Feldman currently leads the team in wins and ERA and has emerged as a prime trade candidate as the July 31st trade deadline approaches. Feldman is signed to a one-year deal worth $7 million.

Travis Wood has rebounded from an up and down 2012 campaign to establish himself as part of the Cubs’ rotation of the future. The 26-year-old lefty has a 2.24 ERA through nine starts and has allowed just 37 hits in 60 1/3 innings. The Cubs also got some good news when Matt Garza returned from the disabled list on Tuesday. Garza, a free agent after the season, tossed five scoreless innings in his season debut against Pittsburgh. Garza, like Feldman, could be a hot commodity at the trade deadline.

Then there’s Edwin Jackson: a flop in the first two months of the season. For better or worse, he’s got another three and a half seasons to make good on his $52 million contract. Scott Hairston has failed to provide an adequate right-handed platoon partner for Nate Schierholtz. Hairston clubbed 20 bombs for the Mets last season but is hitting just .125 for Chicago.

The Cubs’ troubles have carried over to the minor leagues where highly regarded prospects Albert Almora and Junior Lake have yet to play due to injury. Brett Jackson and Josh Vitters, considered vital cogs in the Cubs’ rebuilding plan as recently as last summer, have stalled at Triple-A. Vitters is currently hitting .121 with four extra base hits in 99 at bats for Iowa. Jackson reportedly revamped his swing during Spring Training but the early results have been discouraging. The athletic outfielder is hitting .175 at Iowa with 59 strikeouts in just 120 at bats.

Dale Sveum’s bullpen has been in constant flux all season. Carlos Marmol lost the closer job in the season’s first week and lost the trust of the Wrigley faithful forever. Marmol will be a free agent following the season. The Cubs would love to deal him at the deadline but his well-documented control issues and $9.8 million salary make that unlikely. After establishing himself as Chicago’s most dependable reliever last season, Shawn Camp has struggled in 2013. The veteran has allowed 26 hits and four home runs in just 16 2/3 innings. The struggles of Marmol and Japanese import Kyuji Fujikawa have opened the door for Kevin Gregg to emerge as the Cubs’ closer. Gregg spent most of last season holding down the end of the Orioles bullpen bench and logging innings in blowouts.

Cubs fans must constantly remind themselves that shortstop Starlin Castro is still just 23 years old. Castro has failed to make the offensive leap that many have projected for him and he’s still prone to defensive miscues. Chicago signed Castro to a $60 million contract extension last summer but the young shortstop has regressed since leading the National League in hits in 2011. He currently sports an on base percentage of .301. The Cubs are banking on Castro to be a major contributor as the club is rebuilt into a contender; whether he’s up to it is a big question mark.

Chicago signed Cuban defector Jorge Soler to a nine-year $30 million free agent contract in the summer of 2012. The strapping outfielder has impressed with his play but his adjustment to the professional ranks hasn’t been smooth. Soler was suspended in April after charging the opposing dugout with a bat after an on-field argument and was benched by Dayton manager Dave Keller for failing to run out a ground ball. The Cubs are no doubt hoping that Soler’s early transgression can be chalked up to cultural differences and that his bat will do the talking from here on.