What to do with Brian Roberts and Derrek Lee out of rotation. 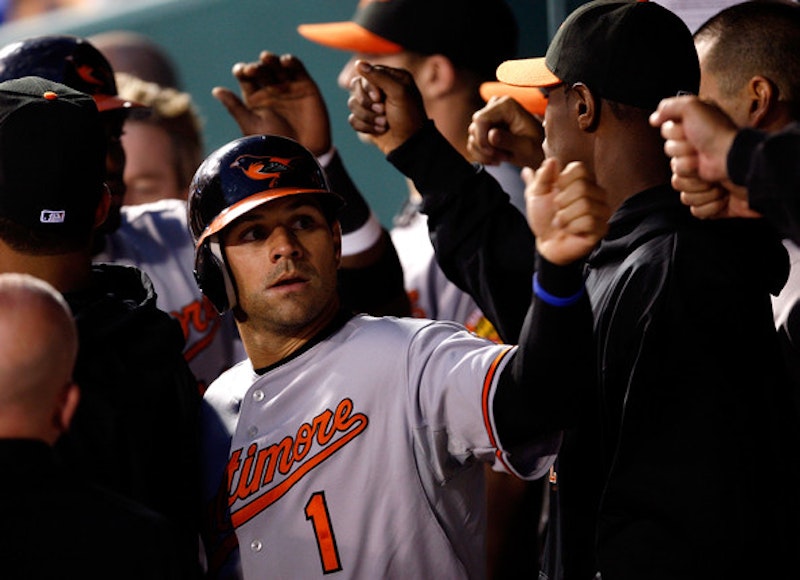 After the recent injury to Derrek Lee, and Brian Roberts’ endless array of ailments, the Baltimore Orioles have an infield problem. This isn’t all that shocking as Lee battled a wrist injury in 2010 that required offseason surgery and Roberts missed nearly four months last year with a back injury. Roberts is now expected to be out until late June after suffering a concussion last week in Boston when he dove head first into first base. I'm all for hustle and being a "gamer" but diving into first base is stupid in Little League, let alone the Majors.

The Orioles re-signed light-hitting shortstop Cesar Izturis over the winter to serve as depth for Roberts and the brittle JJ Hardy at shortstop. Now Izturis is on the 60-day DL after elbow surgery. No disrespect to Izturis but his injury probably serves the Orioles well as manager Buck Showalter won't have the option of putting his balsa wood bat in the lineup. The most recent injury to Roberts shouldn't be viewed as a death knell to Baltimore's 2011 season. It's not like they were going to win the Wild Card this year. At best, the hope was that the team could finish near .500.

The team is much better equipped to deal with the loss of Roberts this season than last; most notably because the starting pitching has been so much better.  Zach Britton, Jeremy Guthrie and Jake Arrieta give the team a chance to win each time they take the hill. Brian Matusz, who figured to be the staff ace, will return to the rotation sometime next week. The fact that the Orioles have remained near .500 this far into the season with little to no contribution from Matusz, as well as Roberts, Nick Markakis and Lee is a testament to Showalter, not an indictment.

Roberts' trip to the DL has created opportunity for young players like Robert Andino and Ryan Adams. Andino filled in admirably during Hardy's recent DL stint. He has very little pop put he's posted a career high OBP and played stellar defense at SS, 2nd and 3rd. He's even started a few games in left field. Andino has received most of the playing time since Roberts went out of the lineup 10 days ago. I'd like to see recent minor league call-up Ryan Adams get some more at bats.

Adams has been a very productive hitter over his minor league career.  Last season in AA Bowie he hit .290 with 43 doubles and 15 home runs. He's also fared well against lefties posting the following slash lines against southpaws over the past two seasons:

The Orioles have been routinely baffled by washed-up and junk-balling lefties for years. In fact, during the past three full seasons the Orioles are a woeful 58-102 in games started by opposing lefthanders. I understand that the knock on Adams is that he has no glove. In the low minors he regularly had games with multiple errors at second base. He was even moved to third base for a brief time. He's made strides with his defense, just two errors this year in AAA Norfolk, and should at the least be given a chance to help the Orioles against the dreaded lefties of the AL East (Price, Sabathia, Lester, etc.). Buck could easily spot start Adams and sub in Andino for defense in late and close situations and games started by the groundball-inducing Britton.