The Rays bullpen is in fine order thanks to Kyle Farnsworth. 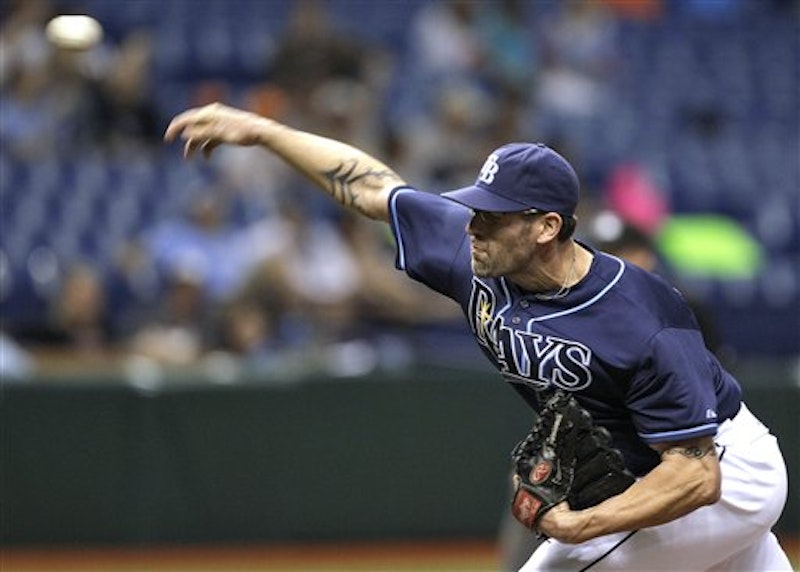 The Tampa Rays have done it again. Despite massive offseason losses Tampa sits in first place in the AL East. The Rays boast one of baseball's best rotations and were expected to play solid defense. The bullpen on the other hand was a major concern after the departure of last season's closer and top setup men.

Enter Kyle Farnsworth. Now 35, Farnsworth has worn many hats in his thirteen year big league career. He's been a fireballing starter, a valued setup man, a promising closer, a high priced free agent bust and most recently a reclamation project.

Farnsworth's early years were hampered by inconsistency. He struggled as a young pitcher for the Cubs as he bounced between the bullpen and rotation. He posted high walk totals and some unimpressive ERAs. A free agent after the 2005 season in which he saved 16 games with Detroit and Atlanta, Farnsworth took the Yankees money and laughed all the way to the bank. He was brought to the Bronx to serve as the 8th inning bridge to Mariano Rivera. The Yankees paid for Farnsworth's 2005 save total but what they got was high walk totals and an unreliable late inning reliever. Perhaps they should have talked to the Cubs.

After bouncing around in baseball purgatory (Kansas City) for a few seasons, Farnsworth was signed to a one year deal by Tampa last offseason. Tampa was tasked with replacing the top three bullpen options from last season's AL East division champ. Many pundits pointed to the Rays questionable bullpen when they picked the Rays to finish third behind New York and Boston. It is still early and Tampa may very well finish third but reports of their demise were clearly exaggerated.

Farnsworth has been a Godsend as he's posted two wins and nine saves for the Rays. The biggest change in Farnsworth has been his control. After a career average of nearly four walks per game, this season he has walked only one batter in 15.1 innings. Farnsworth's improved control dates back to 2010 when he walked just 19 batters in 64 combined innings for the Royals and Braves.

Kyle Farnsworth is proving once again that it doesn't make much fiscal or baseball sense for a small market team to pay top dollar for a closer or free agent reliever. Are you listening Andy MacPhail? While the Yankees handed Rafael Soriano $30 million to pitch the 8th inning (clearly learning nothing from their own Farnsworth debacle) the Rays signed his replacement for 1 year at $3.2 million. Kyle Farnsworth may certainly hit the wall at some point, or his old command problems could re-surface, or the pressure of closing games with the pennant on the line may rattle his nerves, but for right now he is delivering stellar value to Tampa. He has settled a disjointed bullpen and may just help hold off his old employer in the Bronx.