And isn't there something nice about that? 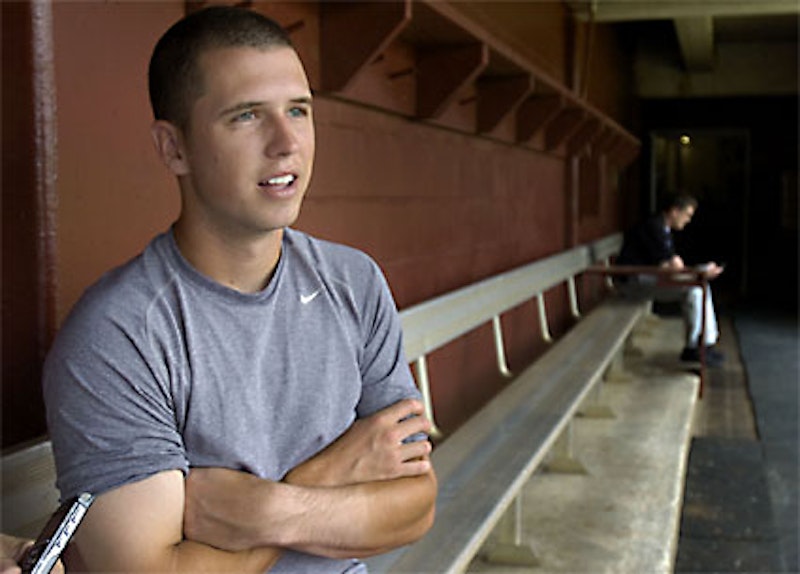 The baseball media has stewed and fretted over the indefinite loss of their self-dubbed Wunderkind, Buster Posey. The reigning rookie of the year, Posey has stolen the hearts of analysts all over the country. Leading the San Francisco Giants—with a lot of great pitching from Tim Lincecum, Matt Cain, Jonathan Sanchez and Brian Wilson— to a World Championship in his first season in the Majors, Posey already has a legacy to live up to.

When he went to the disabled list on May 26, it’s no surprise that a myriad of reporters immediately started covering the story. ESPN’s Buster Olney even advocated banning catchers blocking home plate, saying, “It's time that catchers should be taught differently. And it may be time for Major League Baseball and the Players Association to talk about taking this play—the catcher blocking home plate—out of the sport.” Why didn’t Olney write a similar piece when Boston’s Ryan Kalish wrecked the Indians’ Carlos Santana last year? Why is Posey’s injury the last straw?

Unintentionally, Olney revealed that the real issue in baseball is not about catchers blocking home plate, but about certain players getting special attention because of their name.

Seriously, aside from his statistics, Buster Posey is not that interesting of a person. He’s cut in the mold of Joe Mauer. He’s great offensively, defensively, in the clubhouse, assuaging the media, and a family guy. But there’s nothing special about him, unlike so many of his teammates. He’s not cool, and doesn’t have a vicious mullet like Lincecum, aka The Freak. He wasn’t morbidly obese and now looking bulimic like Pablo Sandoval, Mr. Kung-Fu Panda. He isn’t out of his mind and he doesn’t appear in every other commercial on MLB Network like Wilson, The Beard. Almost every Giants player has an eccentric personality, and Posey just looks out of place. Then again, maybe a boring, consistent team leader is just what they need.

Replacing him isn’t going to be easy, as I’m sure Giants fans can imagine and Red Sox partisans can sympathize with. Over the hill players like Bengie Molina and Pudge Rodriguez are likely targets for GM Brian Sabean. Fans shouldn’t worry too much about offense declining drastically, as Posey wasn’t performing well in the month of May anyway. Sandoval will be back soon and bring the team’s hitting statistics back into mediocrity and out of the gutter.

Of course, it’s still hard to win a World Series with a mediocre offense, let alone two years in a row. Undoubtedly, Sabean will search for upgrades throughout June and July. Jose Reyes is an obvious target, with Miguel Tejada struggling mightily. Another Met, Carlos Beltran, could be on their short list because of his high power numbers this year. A minor upgrade with a major Afro, Coco Crisp would fit into AT&T Park well with his combination of doubles power and speed. And, if they can deal with his horrible defense, the Twins’ Jason Kubel would add some thump to the Giants’ lineup.

The Giants have a lot to worry about with Buster Posey going forward. Should they rush his recovery and get him back into the lineup or shut him down for the season and make sure he heals properly? Whatever their choice is, I hope they make it fast, because Posey is wasting a spot on my fantasy team’s DL and waiting to be dropped.