The author watches Miami win game one at The Redwood, a hip bar in Seattle. 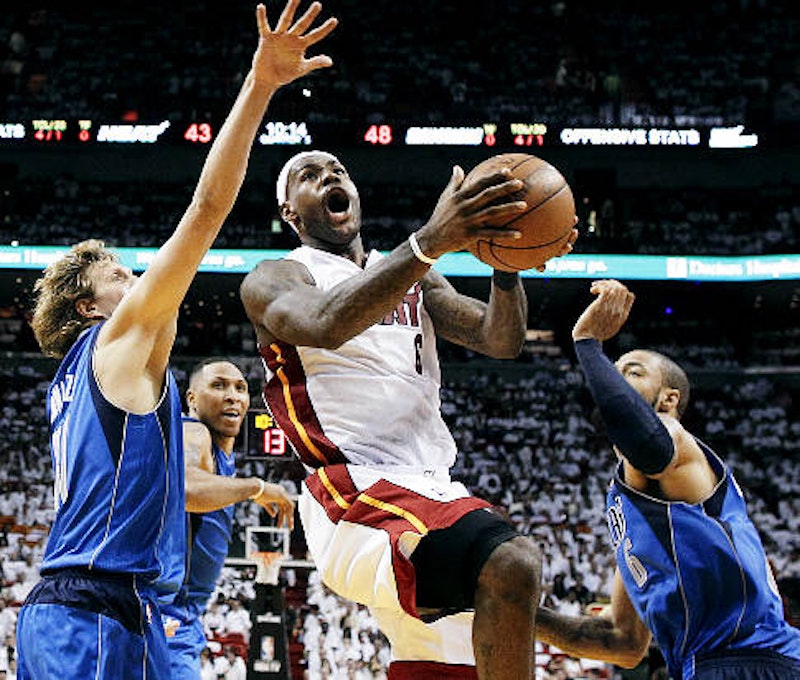 I love professional basketball, but I’ve always found it a little ridiculous. There’s something unreal to me about 10 guys, all of them in absurdly good shape and positively enormous, moving with grace and power and coordination; professional basketball often seems like an embellishment of human physical capability. Consequently, I get engrossed in basketball the same way that I did with superhero comics in my teenage years: furtively, almost guiltily, always knowing it was silly and inconsequential, but nevertheless enthralling.

I suppose this is really a roundabout way of saying that I love watching basketball, but don’t always care what happens.

This anti-teleological view leads me to be interested not just in the game itself, but the viewing experience as well. For example: What’s the difference between watching with a friend who knows what’s he’s talking about and someone who knows absolutely nothing about the sport? What about watching alone, streaming on your computer versus alone, but in a crowded bar?

Environment One: The Redwood, a Bar Next to My Apartment

My friend Ted and I watched the Miami Heat put on the afterburners against the Dallas Mavericks in an at-first-sparsely-crowded-and-then-actually crowded bar, the both of us nauseous from the all-you-can eat peanuts. Ted is from Boston, which means he loves the Celtics, but he’s not a dick about it.  The game is on a projection screen at one end of the bar, over some booths, and the people underneath are craning their necks upwards, trying to watch the game in a way that looks painful. This is by no means a “Sports Bar.”  Instead, this is one of those intentionally rustic bars, with bear paintings on the wall and the inside saturated in orangey-brownish light, and everything made of wood.

I show up with about five minutes left in the first quarter and we take our seats at the bar facing the screen and the rest of the tables. Sitting next to us is the only person I’ll see all night wearing a jersey: a 20ish Asian wearing a Dwayne Wade jersey. He’s fairly quiet, and the only move in his fan repertoire is the fist-pump and a small, furtive exhalation. He leaves by halftime. In front of us are a group of late-20s white guys arranged in a U-shape open towards the screen. They appear to enjoy and know a fair bit about basketball, but are otherwise loud and guffawing in the way that men drinking together in the afternoon can get. Elsewhere in the bar is couple on a date; a man with a white Scotch terrier who seems to be trolling for women to engage with his white scotch terrier; and a woman with pink hair typing on and then laughing spasmodically into the reflective screen of her iPad. Kevin James appears in a commercial, seated next to a gorilla, and there is a silent sadness in his eyes that says, Yes, I am a sentient fart.

The bar has music playing on the PA instead of the game, and so none of us can hear the commentators. This is initially good, as announcers often traffic in inane hyperbole or, in Mark Jackson’s case, grave declarations just before the commercial breaks that rarely mean anything. Soon though, Ted and I are slightly unmoored, and I realize that by their very speech alone, announcers often give cues as to what is really happening in a game. Even the diction and intonation of a simple sentence like “And Kidd again from three!” holds in it loads of information that, if you are not paying complete attention (i.e. shelling peanuts and drinking beer) you will miss. Announcers, if they’re any good, allow you to let your mind wander and still have a grasp on what is happening in the game. An announcing crew is something that, like underwear or shoelaces, seems slightly irritating until you find yourself without it.

Throughout the first two quarters, the two teams trade punches, with Dallas holding a slight edge. Miami brings a hard double-team against Dirk for the better part of the first half, and Dirk struggles a bit, although he does, as always, a good job of finding his teammates out of them. Dwayne Wade looks sluggish, but Chris Bosh is positively spry. At a commercial break, Magic Johnson cheerfully interviews a talking basketball. As the half draws to a close, the Heat go single coverage on Dirk and he burns them for a positively absurd bank shot, and then a beautiful bit of ball movement.

During halftime I ogle a very tall and attractive woman who is on a date. I realize I have taken no less than three dates to this bar, and have had a one-night stand here. As this is not a “Sports Bar” per se, it is sort of automatically a “Place Where You Might Get Laid,” and this makes watching sports raise odd questions: do you ever look attractive while watching sports? Can you hit on someone and simultaneously pay attention to a game? Can you transition from Guy Watching Sports to Guy Who You Could Hook Up With inside one establishment or do you need to change locations to shake this (albeit temporary) perception?

The third quarter starts and Shawn Marion is pretty good. Marion especially seems happy playing against Mike Miller, who seems interested in, if not very good at, defense. Dwayne Wade gets a series of calls that elicit a round of huffing, explosive horse-noises from the men in the bar. LeBron James does one of his many LeBron James things, hitting a too-easy-looking fall-away three as time expires.

In the fourth, Miami pushes their cushion from five to six or seven, and Ted and I get the sense that Dallas, if they’re down by more than six as this game draws to a close, is almost certainly screwed. They can’t get stops consistently—they have to score to stay in it, and the Heat has too much potential to explode. I eat some more peanuts. At a commercial break, Ice Cube menacingly interviews a single bottle of beer in a bucket.
With about three minutes left in the game, Miami is up seven and LeBron James drives the lane and does another LeBron James thing, which is to say an absurdly beautiful and forceful dunk in traffic. It’s fascinating to watch in a group. There’s a sort of mix of resignation and anticipation when he does something like this—even if you’re rooting against him, you want to see what else he’ll do. No one in the bar looks like a Dallas diehard, and so there’s giddiness in the expressions of disbelief. A longing for something else, something more. That’s the genius of LeBron: his talent is one of suggestion, the implication that there is more to be seen, that you are in a continual state of revelation. Needless to say, less than two minutes later, Wade and James connect on an astonishing alley-oop that looks like something two 13-year-olds would concoct with an eight-foot rim and a junior trampoline.

At this point, everyone watching the game diverts his or her energy to something else. One guy, who was on the date with the tall, attractive woman, stands up and says “Yeah baby.” Everyone else shrugs. It strikes me that there hasn’t been any palpable drama in the bar. As such, it’s been harder to follow the play-by-play action of the game. Perhaps sports is an example of group-think—had there been more gnashing of teeth by some Dallas fans, would I have been able to tell you a bit more about Jason Terry’s performance? About J.J. Barea’s shot selection? There are no “stakes” to a game that is watched in a bar like this. Ted and I go to close out our tabs, the guys in front of us close their U-shape, and the guy with the white Scotch terrier stands, still alone save for his dog.